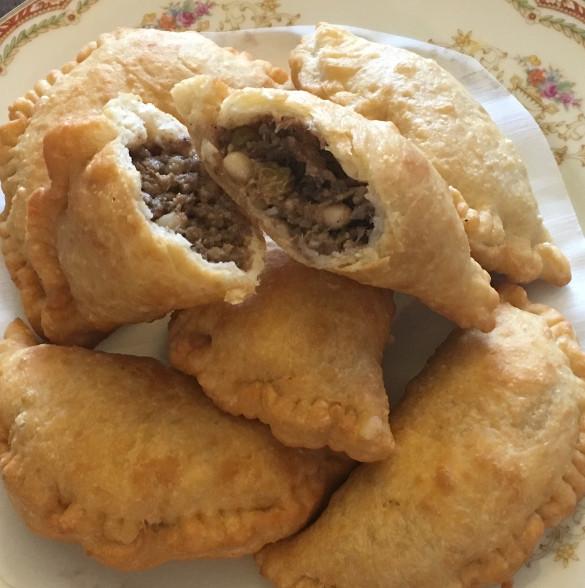 By LIDDIE MARTINEZ
Espanola Valley
Holidays for my family were more about looking back and embracing tradition; a time to bring the family together.
Since my Grandmother was the matriarch and lived with us when I was a kid, generations of relatives started arriving the week of Thanksgiving and came and left with such irregularity, you never knew who might come to dinner. Arrays of ingredients were prepped and cooked for the parade of parties, luncheons and Sunday dinners that followed: six whole weeks of celebrating from Thanksgiving to New Year’s Day. That meant posole bubbling on the stove, tamales in steamers, carne adovada and enchiladas in the oven, pies on display, bizcochitos on trays, candy dishes at every turn and empanaditas carefully hidden from wandering babies whose palates were too inexperienced to taste such rare and delicate treasures. Now, empanaditas made a single appearance each year and we all looked forward to it as much as to our night with Dick Clark on Times Square.
New Year’s Eve was the only night we could rely on being wholly unsupervised – our parents, grandparents, aunts and uncles all went out dancing leaving us with our cousins in front of our TV to rock in the New Year and count down to the #1 song with Mr. Clark, our virtual babysitter. The kitchen was laden with our favorite foods, the living room floor was padded with sleeping bags and pillows and a tray of fresh empanaditas could be found within reach: Pure Heaven.
Empanadas and their diminutive cousin, empanaditas, were first made in Spain (or at least the Iberian Peninsula) during medieval times while under Moorish invasion. Served hot or cold, baked or fried, they were instant meals served anywhere and, with a wide variety of fillings, sweet or savory, they made cheap suppers, compact, versatile and portable. The empanadita concept quickly caught on and became wildly popular throughout Latin and South America. Spanish colonizers brought them to Northern New Mexico in the late 1500s and so, my family has been making them here ever since. Despite that fact, it was very difficult to get the recipe right; I took four rounds in the test kitchen before they tasted exactly like my grandma’s.
In my family, we always used beef tongue in addition to a roast (beef or pork) for the filling. Not only was it traditional, it was cheap and readily available. Not so today! We had to special order beef tongue and it cost more per pound than the finest cut of steak; nonetheless, I implore you to give it a try. The flavor cannot be replicated with other ingredients and the processing helps you forget about what it is you are actually eating, if you are squeamish about uncommon ingredients. If you cannot stomach the thought (we will talk about menudo another day), use a beef roast and omit the beef tongue but, it won’t taste the same.
One other thing, local piñon is the ingredient you need. We do not have a harvest every year, including this year, due to weather conditions, so, you may have to use packaged pine nuts found at a supermarket. They are not the same but they are a suitable substitute. I had to barter with a friend who was wise enough to freeze some local piñon when we had a bumper crop. Bartering is a northern New Mexican tradition and when trading piñon for homemade pies everybody wins!
Filling
Feed meat through meat grinder using disk for a medium grind. Add the rest of the ingredients except for the broth and piñon nuts and combine well.
Depending on the texture of the filling add broth a little at a time or applesauce until the filling is desired consistency. Don’t make it too wet or your pastry will get soggy and hot oil will pot up when you are frying but you do not want a texture that is too dense either.
Add piñon nuts at the end and fold into mixture until evenly distributed. Set aside.
Pastry
Mix dry ingredients together and cut in lard or butter. Add just enough milk to make into a dough ball.
Rest the dough in the fridge for at least 15 minutes before rolling. Roll dough out into a rectangular sheet and cut 4” rounds. Fill and fold pastry over into a half moon. Brush edge with damp brush and pinch edges to seal. Deep fry in hot oil a minute or two on each side until golden brown. Drain on paper towels.
Menu
Los Alamos
66°
Fair
5:49am8:25pm MDT
Feels like: 66°F
Wind: 15mph S
Humidity: 43%
Pressure: 30.27"Hg
UV index: 0
TueWedThu
90/66°F
90/64°F
82/61°F
Weather forecast Los Alamos, New Mexico ▸