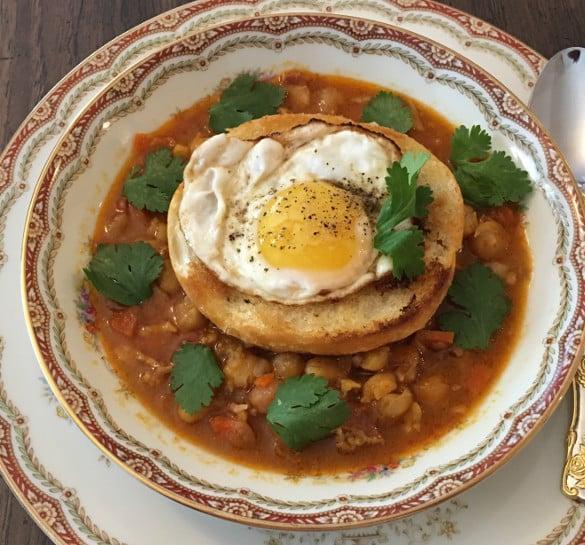 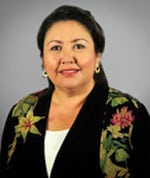 By LIDDIE MARTINEZ
Espanola Valley
When the crisp fall air sets in and work in the garden has slowed to a snail’s pace, I turn my full attention to my kitchen and the comforting aromas rising from my stove top hearkening voices of old.
My grandma loved garbanzos (chick peas) and made a wonderful stew that combined the richness of roast beef and the acidity of freshly crushed tomatoes to bring out the creamy texture of the legume. It is also a dish I have often encountered when participating in Feast Days at neighboring pueblos and it is always a sight that warms my heart. I don’t know why I don’t remember to make it more often, especially with garbanzo in the cuisine spot light these days masquerading as hummus. People love hummus! This version of my grandma’s stew is disguised as a hearty soup.
Years ago, when traveling in Las Alpujaras, Spain, my friends and I stopped at a small diner along the road that served a beautiful garbanzo soup topped with a crostini and a perfectly fried egg as tapas with a glass of red wine. The soup was the same flavor as my grandma’s garbanzo but the peas had been slightly crushed to thicken the rich liquid while leaving some of the garbanzo whole. This created an interesting texture as the toast soaked up the liquid creating a comforting, filling dish packed with protein. The egg floating on the toast was a beautiful plating design that showcased the richness of the yolk as it flowed into the soup. They garnished the dish with a chiffonade of flat parsley but I have used cilantro as it adds a citrus-like freshness without the need to squeeze a lime wedge, although that would be a nice addition as well. Garbanzos are one of the oldest cultivated crops in the world originating in the Mediterranean some 3000 years ago. High in protein, they reduce cholesterol and thereby decrease the risk of heart disease. But in truth, you will love them because they are delicious!
Traditionally, when garbanzo is served as tapas, the dish is made with chorizo, a spicy and delicious sausage that can be found in most grocery stores. My version is made with smoky, thick-sliced bacon, but if you want the heat, try the chorizo. Or, if you are looking for a vegan dish, forget about the bacon and chorizo; the garbanzo can definitely stand alone. 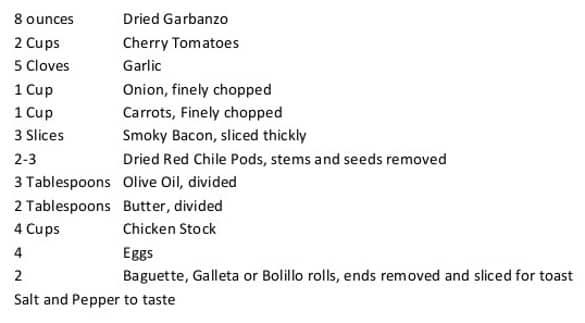 Soak the garbanzo in ample water overnight. Rinse garbanzo in the morning, drain and add fresh water to cover. Pre-heat oven to 370°. In a cast iron skillet, roast tomatoes and garlic drizzled with 1 tablespoon of olive oil. Season with a dash of salt and pepper and roast in oven for 30 minutes.
Remove from oven and cool slightly.
In a Dutch oven sauté onions and carrots in 1 tablespoon of butter and remaining oil until onions are almost caramelized. Meanwhile, toast chile pods on your comal or griddle over medium heat until they are hot & soft. Reduce heat on Dutch oven and add bacon. Continue sautéing until onions are caramelized. Add garbanzo in their water, chile pods and chicken stock. Increase heat and bring to a boil. Time for ten minutes then remove the chile pods and reduce the heat to a simmer.
In a blender, puree roasted tomatoes, garlic and chile pods with two ladles of liquid from the pot. Press puree through sieve into pot, stir, cover and cook over low heat for about two hours until garbanzo is tender. Mash slightly before plating. You could also bake in the oven at 350° for two hours, if you prefer.
When soup is ready, make the crostini. Butter both sides of the bread and place on pre-heated comal or griddle for a minute or two on each side until golden brown. Plate soup in a wide dish and float the toast on top. Fry and egg in a pat of butter and place on toast. Garnish with cilantro leaves.
Vegan version: omit bacon. Add 1 diced red bell pepper to the tomato and garlic roast and increase roasting time to 45 minutes. Add 2 bay leaves to the pot of when adding the garbanzo and discard before mashing.
Makes four hearty servings.
Menu
Los Alamos
88°
Sunny
5:48am8:23pm MDT
Feels like: 88°F
Wind: 9mph SSE
Humidity: 9%
Pressure: 29.76"Hg
UV index: 1
TueWedThu
88/64°F
91/64°F
90/64°F
Weather forecast Los Alamos, New Mexico ▸