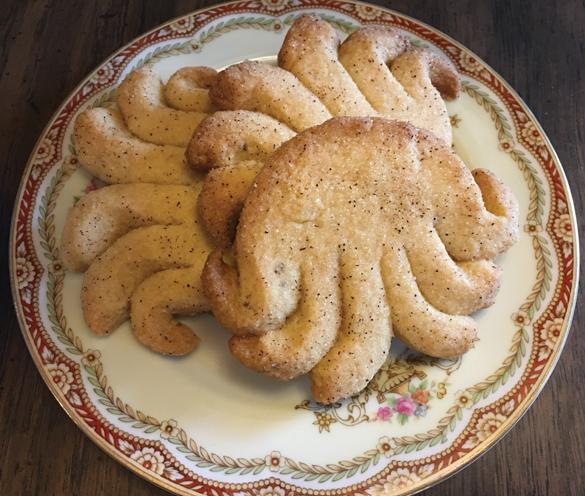 I remember the last time I baked bizcochitos with my Grandmother: I was a young bride in college and stopped in to check on her after class.

She was in the kitchen she sometimes shared with my mother; it was my mother’s house, but it was Grandma’s kitchen. She was at the kitchen table in front of a large ceramic bowl that was wide and deep and allowed her the movement and leverage she needed to whip the lard, sugar and eggs into a cloudy puff.

The memory of the perfect consistency she obtained in that bowl still amazes me as it is difficult to accomplish with a Kitchenaid and she did it all by hand. She asked me about my day, what I had learned at school and told me to put an apron on so my good clothes wouldn’t get messy as I fished cookie sheets out of the cupboard, pre-heated the oven and searched for cookie cutters in a drawer.

We had a rhythm that I never recognized until my own son left for college and returned home one day to find me baking and did exactly what I just described: stepped into my system and without a word or a thought, assumed the role of sous chef, a role I had played most of my life for my Grandmother and never recognized. It surprised me that it was being replayed in my own kitchen.

My son and I have always worked in perfect harmony, he hands me what I need before I ask for it. He knows where I will step and is never in my space but always at hand with everything required.

I realize now how rare that gift is – and on the very uncommon occasion when it replays in my kitchen, it pleases me to know that he will do the same with my someday grandchildren, when they arrive, if I cannot. This unspoken legacy of kitchen mastery is what I inherited and what I hope to pass on.

My grandma and I didn’t use cookie cutters that day; instead we used Mason jar rings to cut circles and sharp knives to make the cuts for the curlicue decorations.

She always made the last few sheets of cookies in this way, homage to her Grandmother who taught her the technique when she was a girl. That day we made them all that way.

Bizcochitos have origins in sixteenth century Andalusia, Spain, but our bizcochito is truly a northern New Mexican invention perfected over time by the Spanish Colonists and our Native American neighbors.

How do I know this? Well, I believe that the proof is in the pudding, or cookie, if you will. Both Native and old Spanish families have made the exact same cookie in the exact same hand cut shape I described above for more than four hundred years. It is a technique that is taught one generation to the next and is not published in any cookbook I’ve ever encountered. It is evidence of our shared culture. In Spain the traditional shapes for mantecados, bizcochitos’ buttery short bread cousins, are stars and moons. But in New Mexico, the traditional shape for bizcochitos is a stylized take on Fleur de Lys – a lily shape, six perfect petals honoring St. Joseph and his search for shelter during Las Posadas.

The anise flavor is also a Spanish influence. Many years ago, while traveling down a very old and windy Roman road we were hit with the scent of anise several miles from Chinchόn, a small rural community just southeast of Madrid, Spain. Immediately, we had visions of bizcochitos.

Anise, we learned, was grown there and their famous anise liqueur was distilled in an old medieval castle located in the village. Sorry to report, no bizcochitos were found in Spain as they are only made here.

This cookie, our state cookie, has a past that is older than the state itself and that demands respect.

While you could substitute and make them healthier, I implore you to make them using traditional ingredients. For the record: You must use lard.

Yes, lard.  Not butter or oil or shortening- LARD. If you aren’t going to use lard, don’t make them. Trust me. It is too much work to be disappointed with inferior results; you may as well make pecan sandies or thumbprint cookies, both delicious, but not in the bizcochito league.

Also, use the anise; it is a link to our Spanish heritage. To avoid the annoyance of tiny seeds stuck in your teeth, use a good mortar and pestle.

Make sure to crush the anise before adding it as crushing releases the oils to maximize the flavor and also removes the likelihood of an anise seed stuck between your teeth.

If you hate anise and cannot use it or are allergic, although I have never heard of a single account of an anise allergy, you can use a combination of orange and almond extract or Grand Marnier and orange zest, but only if you must substitute.

You will also need an extra set of hands to add the flour while you are kneading, so call in your backups, otherwise you will have sticky dough on your floor, on your flour container, and on everything else you touch. One last thing, don’t obsess about the lack of precise measurement for the flour. As with pie crust, the amount you need will vary depending on the weather.

Don’t fret! Keep adding flour, a little at a time, until the dough stops sticking to your hands. You will know when to stop. Now, get going! It’s time to start your baking!

Make double batches and freeze the extra dough; you can thaw and bake another round when company is expected or, if you have superior will power, bake them all now, freeze the cookies and save time, although I must warn you that this makes it super easy to access whenever the urge strikes and they tend to disappear quickly.

Cream the lard, sugar and eggs until light and fluffy. Add the rest of the ingredients (except flour) in order until well mixed.

Then add the flour a little at a time mixing with both hands on a flat counter or table until the dough no longer sticks to your hands. A kitchen helper is essential for this or it will get messy.

Cut the ball of dough into quarters and rollout a quarter at a time using bench flour to about ¼ inch thickness or less.

Cut out shapes and dust tops with cinnamon sugar. Gather dough into ball and repeat. Bake at 375° for 12 to 15 minutes or until golden brown. Cool on racks.  Makes about 8-10 dozen depending on size and thickness.

About the thickness – I’ve had bizcochitos ranging from paper thin and crisp to pudgy dunkers, I vote for somewhere in the middle but your baking time will vary depending on thickness so watch those first sheets and document the time for future bakes.