Volunteers organize food during a past National Letter Carriers Food Drive. Courtesy photo
By KIRSTEN LASKEY
Los Alamos Daily Post
kirsten@ladailypost.com
Last year’s annual fall National Letter Carriers Food Drive is considered one of the most successful and organizers hope for another banner food drive Saturday.
During the 27th Annual National Letter Carriers Food Drive, Atomic City Letter Carriers (NALC-4112) and Boy Scouts of America (BSA) will collect food for the local pantry, LA Cares. Donors can leave items near their mailboxes and Cub Scouts will also be stationed at the Smith’s grocery stores at Los Alamos and White Rock to collect donations.
If leaving food near mailboxes, Food Drive Coordinator Bill Blumenthal said it would be best to have the items out by 9 a.m. Saturday. Additionally, Cub Scouts will accept food 9:30 a.m. to 5 p.m. in Smith’s in Los Alamos and 10 a.m. to 4 p.m. at Smith’s in White Rock.
Suggested donations include:
LA Cares Treasurer June Gladney said healthy cereals, juices, canned chicken and meat are highly needed. She added paper products such as paper towels and toilet paper as well as personal hygiene items and home cleaners are needed. Blumenthal emphasized no glass containers.
Gladney suggested when considering what to give, to think, “What could you not do without?”
The spring food drive tends to yield fewer donations than the fall drive, Blumenthal said last year’s  fall food drive was very successful. Approximately 20,000 pounds of food was donated to LA Cares during the fall drive.
“We actually had a very good year,” he said. “The community was very generous.”
Gladney said it is important to give no matter the time of year because the food from the drive needs to be distributed by LA Cares during the next six months.
Gladney said LA Cares serves approximately 75 families a month and the donated food, she said, “makes a huge difference in whether they have something to eat.”

According to US Census statistics Los Alamos has 3.7 percent of its resident living in poverty but according to the latest  Feeding America statistics 13 percent are living with food insecurity, Gladney said. This means 2,290 individuals are not sure where their next meal will come from or they need to choose between paying a bill or paying for groceries. Plus, many seniors living on fixed incomes depend on the food LA Cares provides.

She added many perceive Los Alamos as a place with huge wealth and it just isn’t true. This can hinder the community from receiving assistance or grants.
“We have to take care of our own,” Gladney said.
The food drives are essential to do that. Gladney said LA Cares and its clients couldn’t function without the two annual Letter Carrier-BSA food drives.
She added those who receive food from the local food pantry are extremely grateful.
During distribution days, which takes place the second Friday of the month and the Thursday before at Bethlehem Lutheran Church, Gladney said volunteers are showered with “God bless you” and “We’re so appreciative.”
“We know it matters,” she said.
Not only does the food drive satisfy people’s food needs but it also provides a great opportunity for young people to help their community, Blumenthal said.
“One of the things that the Boys Scouts are noted for is community service and this is an important service,” he said.
He added one of the mottos for the scouts is “do a good turn and help others daily.”
Gladney added the scouts’ energy is inspiring.
“We appreciate their involvement,” she said.
The spring food drive, which the letter carriers and boys scouts co-sponsor, is a national program with a long history in Los Alamos.  County residents will also receive a postcard in the mail this week from the letter carriers with a Family Circle® cartoon reminding them of the food drive.
The spring drive is always held the second Saturday of May and the fall drive is on the Saturday before Thanksgiving in November. Blumenthal said the scouts and letter carriers joined forces with the drive in the late 1990s, which has been a beneficial partnership. It helps reduce overtime for the letter carriers and teaches young people about the value of community service.
He added he has been involved in the drive “since my (now adult) son joined Cub Scouts.”
“I think it’s important to give back to the community,” Blumenthal said. “I see this as part of the community service I do for the scouts and the community. It’s an important lesson for the boys that they can make a difference through their efforts.”
There are numerous ways to support LA Cares. Besides the two drives, there are two bins at the aquatic center for donations and people can send monetary donations to LA Cares at PO Box 248, Los Alamos, NM 87544. Gladney said since LA Cares is a 100 percent volunteer organization, 91 percent of its income goes back to the community.
If interested in volunteering for LA Cares, call 661.8015. 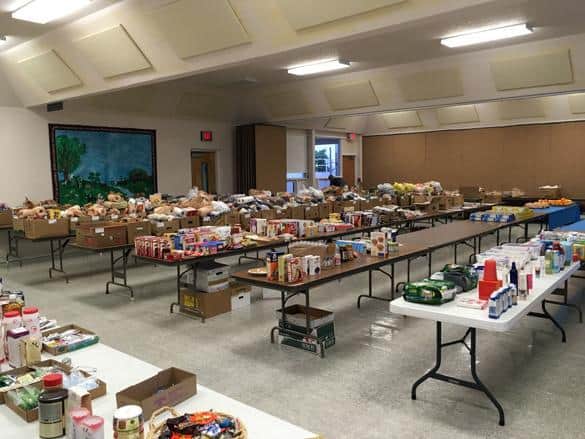