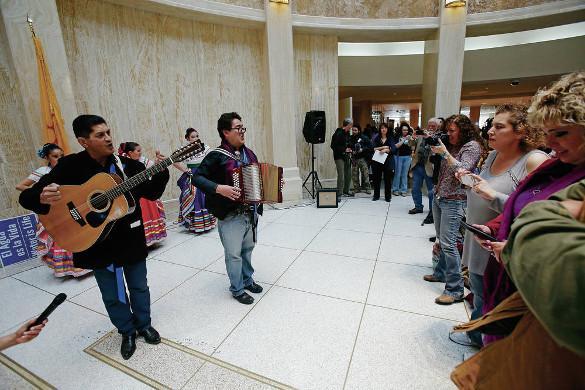 Jeremías Martinez, left, of Truchas and David Garcia of Española play music in the Rotunda of the state Capitol on Tuesday, designated as Acequia Day at the Legislature. Photo by Luis Sánchez Saturno/The New Mexican
SFNM News:
Days left in session: 38
Keeping doctors: State senators voted 32-0 Tuesday for a bill that would generate more private money to recruit and retain osteopathic physicians.
The measure, Senate Bill 21, would supplement existing funding in a medical school loan repayment program for osteopaths providing primary care.
Proceeds from a $100 increase in the cost of an osteopathic physician’s initial or triennial renewal license would go into the fund. A legislative staff analysis of the bill projects it will raise $31,500 a year.
Sen. Gay Kernan, R-Hobbs, is sponsoring the bill. It now moves to the House of Representatives for consideration.
Transgender vital records: A bill to make it less complicated for transgender people to change the sex designation on their birth certificate cleared the Senate on Tuesday by a vote of 26-13.
The sponsor, Sen. Jacob Candelaria, D-Albuquerque, said Senate Bill 20 is of great importance to transgender people. He said they want to identify their gender rather than having an old government record do so.
Republican Sen. Bill Sharer of Farmington led opposition to the bill. One Republican, Sen. Sander Rue of Albuquerque, joined 25 Democrats in voting for the bill. Three other senators were not present for the vote.
Candelaria’s measure would revamp an existing law requiring a person changing sex designation to provide a physician’s statement that a surgical sex-change procedure had been completed. Candelaria’s bill would allow for submission of a statement signed under penalty of perjury.
Members of the House of Representatives will next take up the bill.
Drugged-driving bill stalls: A panel of Democrats on Tuesday blocked a bill that would have changed the state’s driving-under-the-influence law to include nine drugs.
The House Consumer and Public Affairs Committee tabled House Bill 317 by Rep. Bill Rehm, R-Albuquerque. His measure would have allowed police officers to arrest motorists suspected of having drugs such as heroin, cocaine and marijuana in their system, Rehm told the committee.
Several law enforcement officers testified in favor of the bill, saying current state law is muddy on driving impairment because of narcotics.
Among several objections, opponents said the bill would unfairly target those who have a prescription for medical marijuana. The committee voted 3-2 along party lines to table the bill.
State dance hustles forward: New Mexico has a state bird, a state song and even a state butterfly. So why not a state dance, asks Sen. Gerald Ortiz y Pino.
Ortiz y Pino, D-Albuquerque, has introduced Senate Bill 386 to make “La Marcha de los Novios” the state dance. The Senate Indian and Cultural Affairs Committee on Tuesday advanced the bill on a 4-1 vote.
Sylvia Ernestina Vergara, a historian from the Embudo Valley, told the committee many other states have state dances. But most of them are square dances, she said. New Mexico would be the only state to have a grand march popular at weddings as its official dance.
The state Republican Party criticized giving attention to the bill, saying in a statement: “New Mexicans love a fun La Marcha dance at a wedding, but with only 39 legislative days left in this session and hundreds of important bills that haven’t even been heard yet, is Senate Bill 386 really a pressing priority?”
The bill moves next to the Senate Public Affairs Committee.
Quote of the day: “I was thinking of amending this bill to make the red dog our official dog of New Mexico.” — Sen. Benny Shendo, D-Jemez Pueblo, responding to the proposal to designated a state dance. 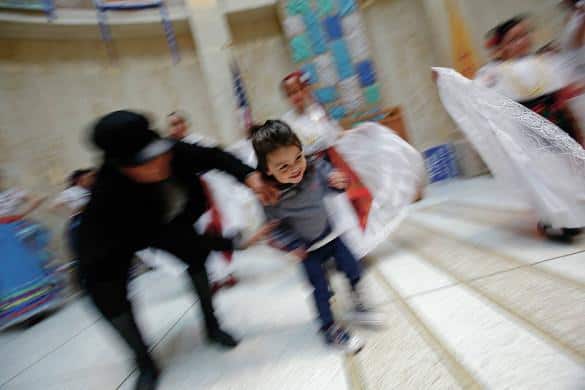 Edith Flores of Albuquerque helps her son Evan Murralles, 2, off the stage in the Capitol Rotunda on Tuesday after he decided he wanted to dance with Moving Arts Española’s folklorica group. Flores and Evan were at the Capitol for the One Thousand Kid March, an event to raise awareness of an effort to use investment revenue from the state’s Land Grant Permanent Fund to pay for an expansion of early childhood education. Photo by Luis Sánchez Saturno/The New Mexican 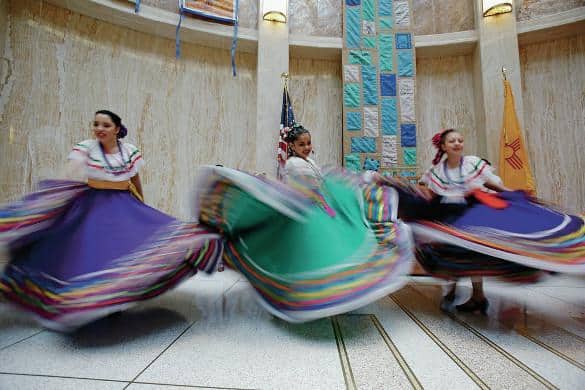