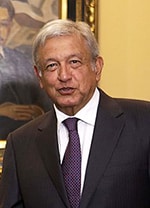 The Telegraph reports that official projections show that Ricardo Anaya of the conservative National Action Party (PAN) won between 22.1 and 22.8 percent; Jose Antonio Meade of the ruling Institutional Revolutionary Party (PRI) – the party of outgoing president Enrique Peña Nieto — between 15.7 and 16.3 percent; and independent candidate Jaime Rodriguez between 5.3 and 5.5 percent.

“Peace and tranquility are the fruit of justice,” Lopez Obrador said as he pledged “a plan of reconciliation and peace for Mexico.”

Lopez Obrador is the first presidential candidate in more than three decades to receive more than 50 percent of the vote.

Lopez Obrador, commonly known as AMLO – the initials of his name – ran on a populist, anti-establishment platform, pledging to clean up corruption, combat increasing crime levels, and use state assistance to help millions climb out of poverty.

His more conservative rivals, Anaya and Meade, warned that Lopez Obrador’s socialist policies would be detrimental to Mexico in a globalized economy.

Lopez Obrador, 64, is a former mayor of Mexico City who lost two earlier bids for the presidency – an exceedingly close election in 2006 and a decisive defeat in 2012. Lopez Obrador will become president on 1 December.

Presidents in Mexico are limited to one 6-year term.

President Donald Trump congratulated Lopez Obrador, writing on Twitter that “there is much to be done that will benefit both the United States and Mexico!” Trump’s anti-immigration policies; his over-the-top rhetoric about Mexican migrants being “rapists and murderers”; his charges that Mexico is not doing to tackle migrants from Central America on their way to the United States; his assertion that the United States will force Mexico to pay for the birder wall; and his insistence the NAFTA has benefitted Mexico more than the United States – all have plunged ties between the U.S. and Mexico to a historic low.

Official estimates say that 63 percent of the 89 million people eligible to vote in Mexico’s biggest-ever elections showed up at the polls. In all, about 3,400 offices and legislative seats were up for election, including 500 seats in the Chamber of Deputies, 128 in the Senate, and nine governorships.

The Morena Party, Lopez Obrador’s coalition of several leftist groups, is likely to win several other key posts, including at least five of the nine governorships.

In another first, Claudia Sheinbaum, a Jewish scientist and a member of Morena Party, would become the first woman mayor of Mexico City.

The run-up to the election saw several political candidates assassinated. The two most recent victims Flora Resendiz Gonzalez, a Workers’ Party activist, who was shot dead as she was leaving her home in Contepec in western Michoacan state, and later in the day, Fernando Herrera Silva, a member of the ruling PRI party, who was gunned down in Acolihuia, in the central state of Puebla.

The two killings on Sunday highlighted the pervasive violence and corruption that have been the top concerns of voters in Mexico. In all, 145 politicians of different parties have been killed since September.