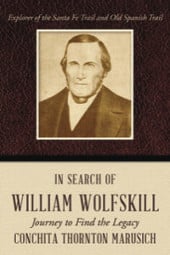 TCHS News:
The Taos County Historical Society presents a free, public lecture by Conchita Thornton Marusich on her great-great- grandfather, William Wolfskill in the Boardroom of the Kit Carson Electric Cooperative, at 2 p.m. Saturday, April 7 at 118 Cruz Alta Road in Taos.
Her talk for the Society is part of the Taos Arts Council Consortium 2018 marketing theme “Taos: Cultural Crossroads of the West.”
William Wolfskill was a trailblazer of the Santa Fe Trail in 1822 and the Old Spanish Trail in 1830. Conchita Marusich will focus primarily on William’s early life as a trapper and intrepid adventurer as he made his way from Missouri to Santa Fe and Taos before ultimately going on to California.
Joined by her husband Rich, she will include interesting stories from their research travels when they retraced William Wolfskill’s footsteps through Kentucky, Missouri, Kansas, Oklahoma, New Mexico, Utah, Nevada and California. They met William Wolfskill in
his environment which meant going to where he had lived, trapped and traveled.
Conchita Thornton Marusich has been interested in storytelling from a young age when her mother recounted tales about their ancestor, William Wolfskill, an important figure in early California history.
Conchita Marusich worked as producer for Disney Educational Production and won numerous awards including CINE Golden Eagle. She also worked on shows for PBS, the Discovery Channel and the Home and Garden Channel. Conchita is a graduate of Vassar College and received her masters from Occidental College. She is a descendant of the Wolfskill, Lugo, De Pedrorena, Juarez and Estudillo families who settled in Alta California while it was still part of Mexico.
Conchita is an active member of the Old Spanish Trail Association (OSTA) and is currently the president of the OSTA “Descendants and Travelers of the Trail” Chapter.
At her presentation Conchita will also make available her book In Search of William Wolfskill:
Journey to Find the Legacy. The book combines two stories. The first part of every chapter is William’s story, which recounts his amazing life. The second part of every chapter tells about Conchita’s journey of discovery as she learned more about her ancestor.
Throughout the book, Conchita includes information that helped her dig deeply into her family’s roots and find pieces of her genealogical puzzle. She also includes tips for the readers who are investigating their ancestors.
The Taos County Historical Society is a 501(c)(3) non-profit organization formed in 1952 for the purpose of “…preserving the history of the Taos area…” Membership is open to anyone upon the payment of dues.
Visit www.taoscountyhistoricalsociety.org for additional information.
Menu
Los Alamos
61°
Partly Cloudy
6:07am8:16pm MDT
Feels like: 61°F
Wind: 6mph SSE
Humidity: 75%
Pressure: 30.31"Hg
UV index: 0
SatSunMon
75/59°F
79/59°F
79/61°F
Weather forecast Los Alamos, New Mexico ▸