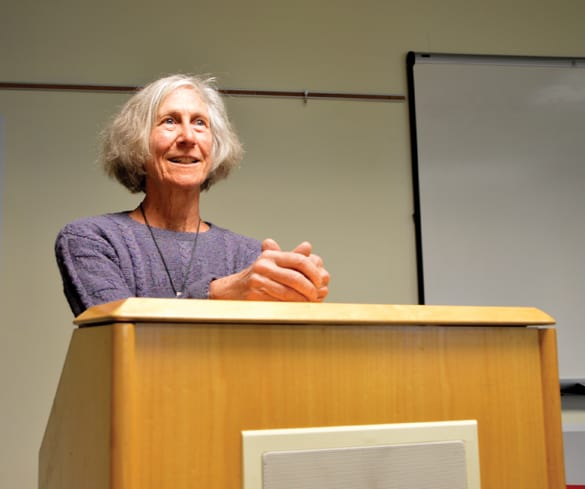 Longtime League President Barbara Calef is recognized and celebrated for her leadership and inspiration. Photo by Carol A. Clark/ladailypost.com

Barbara Calef is stepping down from her role as president of the League of Women Voters of Los Alamos after leading the organization for a total of 10 years.

Calef served as president beginning in 2002 through 2005 and again in 2010 through this spring. She is being recognized and celebrated for her leadership and inspiration. She explained why she is drawn to the organization.

“I feel that we are doing an important service for the community and I really like the fact that the League is nonpartisan,” Calef said.

“She is a pleasure to work with, and, thankfully, will continue to be an active board member,” Jones said.

Wendee Brunish is the League’s new president as of April, Calef is now serving as secretary and Kathy Taylor is the treasurer.

The League is a nonpartisan political organization encouraging informed and active participation in government. It influences public policy through education and advocacy. The League never supports or opposes any political party or candidate.

Kyle Wheeler has known and worked with Calef for years.

“Barbara Calef has been a dedicated leader of the League of Women Voters of Los Alamos for more years than I can remember,” Wheeler said. “She is devoted to the causes that the League promotes, especially transparency in government and voter education. Los Alamos is lucky to have had her steering the League for many years. Now we wish her well as she ‘hits the trail’ but I know she will stay active in the League in a less formal role.”

Calef moved to Los Alamos from San Angelo, Texas in 1989 when her husband went to work at Los Alamos National Laboratory. The couple has a daughter who lives in Garden City, NJ and son who lives in Maui, Hawaii with their two grandchildren.

The League of Women Voters has two separate and distinct roles.

Rebecca Shankland has served on the LWVLA board with Calef for many years.

“Barbara has been a stalwart, organized leader of the League over the years,” Shankland said. “She has moderated a multitude of candidate forums and legislative previews, written up every month’s Lunch with a Leader so that we’ll remember the ideas presented, led major studies on the death penalty, water, and land use so that the League can lobby locally and statewide.”

In her address to the National American Woman Suffrage Association’s (NAWSA) 50th convention in St. Louis, Missouri, President Carrie Chapman Catt proposed the creation of a “league of women voters to finish the fight and aid in the reconstruction of the nation.”  Women Voters was formed within the NAWSA, composed of the organizations in the states where suffrage had already been attained.

The next year, on February 14, 1920 – six months before the 19th amendment to the Constitution was ratified – the League was formally organized in Chicago as the national League of Women Voters. Catt described the purpose of the new organization:

“The League of Women Voters is not to dissolve any present organization but to unite all existing organizations of women who believe in its principles. It is not to lure women from partisanship but to combine them in an effort for legislation which will protect coming movements, which we cannot even foretell, from suffering the untoward conditions which have hindered for so long the coming of equal suffrage. Are the women of the United States big enough to see their opportunity?”

Los Alamos formed a provisional League in 1947, and its members registered voters for the first Town Council elections held in Los Alamos. It became a regular League in the following year. It was one of three local Leagues in existence at the time that the state League of Women Voters of New Mexico was formed in October 1949, and has continued ever since.

League of Women Voters of Los Alamos Presidents Since 1947: