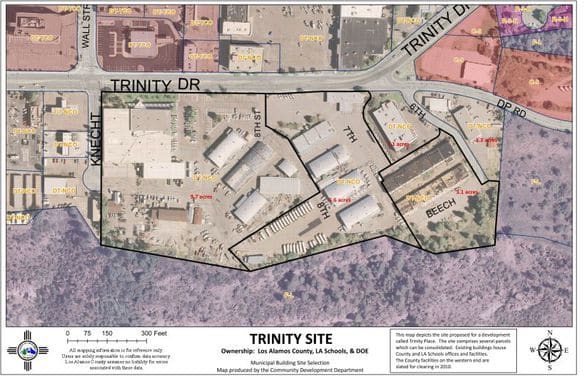 Work is underway on making contacts and seeking interest from potential additional retail tenants for the Trinity Site Revitalization Project to complement the Smith’s Marketplace store.

“It remains a somewhat difficult retail environment owing to the continuing effects of the 2008 recession, but we do have the positive of the Smith’s Marketplace desire to expand into Trinity,” said Bob Feinberg of Grubb & Ellis New Mexico.

“As we’ve talked about all along, Los Alamos is an unusual retail market. It takes considerable explaining to potential tenants,” Feinberg said. “It’s a much smaller population market in a pretty remote place than most retailers generally pay attention to. But it does have high disposable income and a weekday population that makes it bigger than the population that lives here. We work with that.”

Feinberg spoke about the strategy his team has been following.

“The County folks encouraged us to make contact with the existing local retail base to see if there were local businesses that wanted to be at Trinity and we pursued that … we have engaged in several conversations resulting from that,” he said. “If there is anyone we have missed, I’d like to hear from them. We also received a retail gap analysis from the LACDC (Los Alamos Commerce and Development Corporation) that pointed to the retail segments that are missing in the Los Alamos market and that would complement, rather than compete with existing retailers. These two inputs have turned into our first priorities for identifying and pursuing tenants.”

Grubb & Ellis will have a presence at RECON, the International Council of Shopping Center’s annual conference in May.

RECON is the retail industry’s main event for networking and deal making.

“We anticipate that the RECON forum will provide multiple opportunities to connect with prospective tenants,” Feinberg said. “Kevin Holsapple of the LACDC will be on hand to help us tell prospects about the community and the local market, and I understand that County officials Greg Fisher and Kelly Stewart will be attending as well.”

“The county is obviously interested in seeing this project progress well and will be there to assist,” Lynne said.

North American Development Group is midway through the defined “due diligence period” that was established to provide them with time to finalize arrangements with Smith’s Marketplace and test the broader market.

Lynne explained that the project is still at a very early stage and that environmental reviews still need to occur among other standard activities.

“But this is all what was planned for and part of the anticipated process for getting a project like this started,” he said.