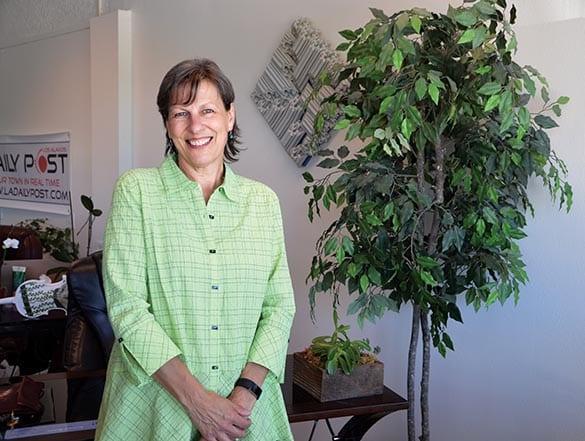 Boncella is well known to the organization having served as director of its Los Alamos Volunteer Association for several years.

“The senior centers provide so many wonderful activities, programs and opportunities for seniors. I look forward to having the opportunity to continue the growth of programs and activities that has been realized under the leadership of Pauline Schneider,” Boncella said.

Boncella is replacing Schneider who after serving 17 years as executive director, is moving with her husband Greg back home to Canada.

“It has been my pleasure to have Linda on our staff for the last three years … she is very capable, and I hope she enjoys serving as executive director as much as I have,” Schneider said.

After growing up in Minnesota and Wisconsin, Boncella attended the College of Wooster in Wooster, Ohio where she graduated with a degree in psychology. She married right after college and moved to the Bay Area where her husband Jim attended graduate school in chemistry at Berkeley. While there, Boncella worked in the financial district in San Francisco.

“I worked for four years for a large leasing firm, mostly in accounting and then as a financial analyst,” she said. “After San Francisco we moved to Oxford, England where Jim had taken a position as a postdoc and I was able to work as an accounts officer for a nonprofit, the British Trust for Conservation Volunteers.”

Two years later the couple moved to Gainesville, Fla., where Jim went to work as an assistant chemistry professor at the University of Florida and she worked at the University in grants administration. After a year, Boncella went to work as a contracts and grants coordinator in the Office of Management and Budget for Alachua County before becoming a budget analyst in the same department.

“Two years later, after my daughter Amy was born, I made the decision to stay at home,” Boncella said. “Our second daughter, Melanie was born in 1995. Then in the late nineties, we moved to Los Alamos for one year while Jim was on sabbatical. We really enjoyed the community and surrounding natural beauty. When the opportunity came up to move to Los Alamos in 2003, we made the decision to move here permanently. While living here during that sabbatical year I began to paint (watercolor) – something I had always dreamed of doing – but now had time to pursue.”

While living in Gainesville, she joined the Gainesville Fine Arts Association, later becoming a board member. She has been involved with art ever since and has participated with the Independent Artists Gallery in Santa Fe since 2004.

In 2013, Boncella took a part-time position as volunteer coordinator for the Pajarito Environmental Education Center. That is where she discovered how much she loves working with volunteers.

In 2015, she began working in the volunteer office at the senior center.

“In my position as LAVA director, I have been able to see how much volunteerism happens in this community and it is truly amazing!” she said.

Friday, July 13 is Schneider’s last day and the community is invited to a big celebration event, 4-7 p.m. that day, to say goodbye to Schneider and welcome Boncella.