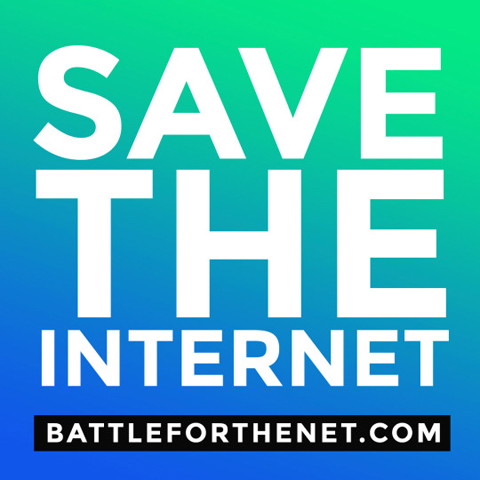 “The FCC needs to listen to the voices of real people who will be affected by this attack on net neutrality protections — not just lobbyists from telecom companies in pursuit of more power. The goal of the protest tomorrow is to ensure that ordinary people have a voice and are heard by decision makers in Washington, DC.  No one — regardless of their political affiliation — wants their cable company to control what they can see and do on the Internet, or to charge extra fees to access the content they want.” said Evan Greer, campaign director of Fight for the Future, one of the leading organizations behind the protest. “The Internet has given more people a voice than ever before, and that transformative power is worth fighting for, July 12 we will come together to defend the future of free speech.”

Media attention for online mobilizations tends to focus on the big names participating, but there is a much more interesting story: a rag tag coalition of Internet activists huddled over their laptops in coworking spaces, home offices, and coffee shops, who are the ones who came up with the idea, called for, and organized the protest, and have since been working together to lay the groundwork, build the technical tools, and create the educational resources that make it possible for large and small websites to participate in these mass days of action. It’s a grassroots effort involving dozens of volunteers working together in Slack channels, outreach spreadsheets, endless email chains, organizing in online communities and forums, and an enormous amount of creativity and digital elbow grease.

More than 80,000 people, sites, and organizations have signed on to the effort overall, and more announcements from major companies are expected in the coming days. Participants will display prominent messages on their homepages on July 12 or encourage users to take action in other ways, using push notifications, videos, social media, and emails.

The effort is led by many of the grassroots groups behind the largest online protests in history including the SOPA blackout and the Internet Slowdown. The day of action will focus on grassroots mobilization, with public interest groups activating their members and major web platforms providing their visitors with tools to contact Congress and the FCC.