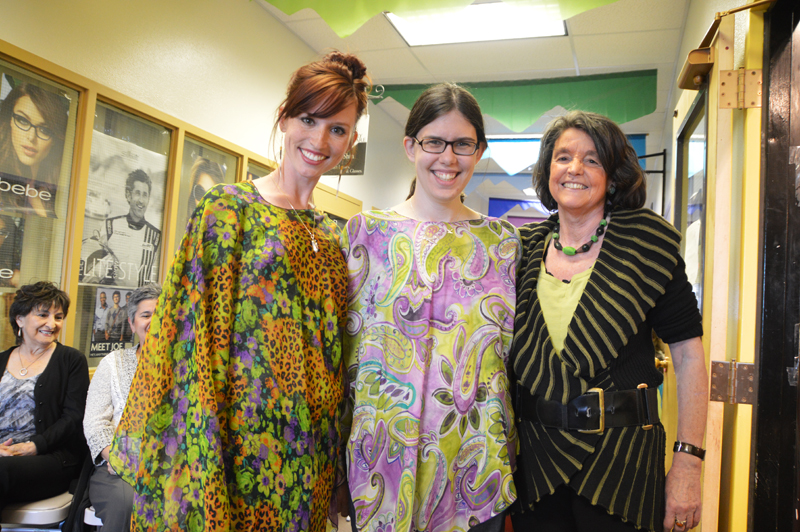 Brimming with energy throughout his talk at Monday’s forum, Dr. Chris Marczak assured the audience that he had been drinking water all day and some unsweetened tea and had not consumed any energy drinks. ‘I’m always like this … ask my wife’, he said. Photo by Carol A. Clark/ladailypost.com 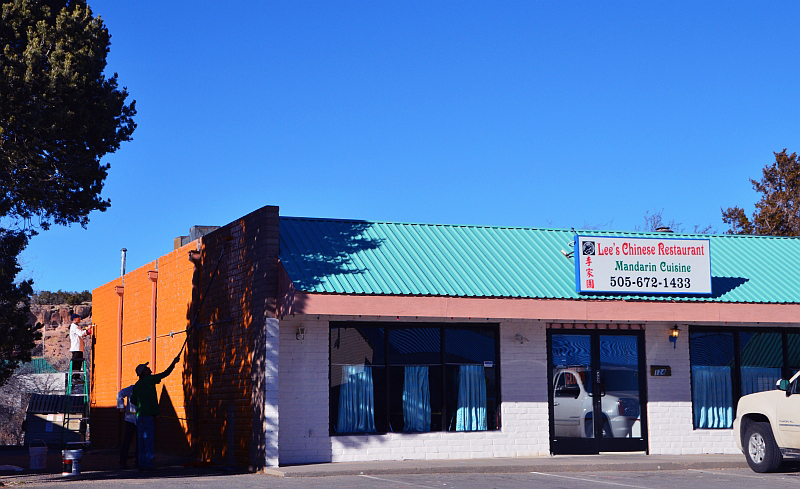 Dr. Chris Marczak, one of two finalists for the Los Alamos Public Schools top job, spoke to community members at a forum Tuesday evening in the Los Alamos High School Speech Theater. The second candidate, Dr. Kurt Steinhaus will speak at a community forum at 7 p.m., Wednesday in the same venue.

Marczak is currently the assistant superintendent for Oak Ridge Schools. He is married and has four daughters, identical twins age 13, a 9 year old and a 7 year old. See Marczak’s resume at www.artzak.com/resume to learn more about his background and credentials.

Marczak has been influenced by authors such as Stephen R. Covey, John Maxwell and Holocaust survivor Viktor Frankel. All of these authors in different ways, challenge us to change ourselves first, he said.

“Our job is to educate all students to the best of our ability,” Marczak said. “We realized as a society that to become great, we need to educate every student to be a good citizen.”

Marczak outlined his strengths as follows:

The question and answer period was moderated by lawyer and Los Alamos resident Dan Castille of Cuddy and McCarthy, the firm that represents Los Alamos Public Schools.

When asked how he deals with conflict, Marczak said, “Confront it head on and find a remedy.” He said he would listen to all sides. “If you don’t work at it, it’s going to explode,” he said.

“If you’re afraid to tell me something, it’s MY problem and I need to know,” Marczak said. “I’m the lead learner and the lead leader.”

Marczak stressed that as much as we may dislike standardized testing “it’s not going away” and we need to make sure kids know what they need to perform well.

When asked about parents opting their children out of PARCC testing, Marczak said he is opposed to it. “Your kids are going to have to take tests for their whole lives—opting out hurts them in the long run,” he said.

Marczak said he is “big into the arts” and art education makes school a richer experience for students.

When asked about his first 60 days on the job, Marczak said he would “become as involved as I possibly can.”

Marczak said he has never been a union member. He said his father’s advice was, “If you do what’s right for kids, you’ll never need a union.”

Marczak was attracted to Los Alamos because of its excellent school system. He said he chose to apply to a small district because it is easier to make a real difference and be nimble than in a large district. When asked how long he planned to stay, Marczak said “as long as you want me, which I hope is a long time.”

“My youngest is a first grader and I want to hand my kids their diplomas,” he said.

He said his three biggest challenges in the first three months are getting to know the community, connecting with state legislators and helping his family adjust to a new community.

While working at Oak Ridge Marczak gained experience working with the Department of Energy and national laboratory, he said.

He stressed the importance of vocational education programs in Oak Ridge. “Our students with industry certification can walk into a job making $30 an hour,” he said.

On the subject of student stress and suicide, Marczak said we need to come together as a community to find solutions, “We need to face the brutal facts and roll up our sleeves,” he said. He identified mental health of students as the District’s biggest problem. “We have the bar way up there and we say, ‘now jump.’ Kids feel helpless and along. We can give kids a leg up.”

Marczak said he does not favor retaining third graders if they fail to read at grade level. “Tennessee has had it for four years and it’s not working,” he said.

When asked about bullying, Marczak said both the victim and the bully need help. “Kids need tools to deal with bullies. They will deal with them their entire lives,” he said.

Marczak identified STEM (science, technology, engineering and math) and early childhood education as areas on which he would concentrate. He suggested collaborating with the Oak Ridge School District, which is quite similar to Los Alamos, he said.

Marczak said education should be about students, not adults. “How do we find out what kids want to do? We ask them,” he said. 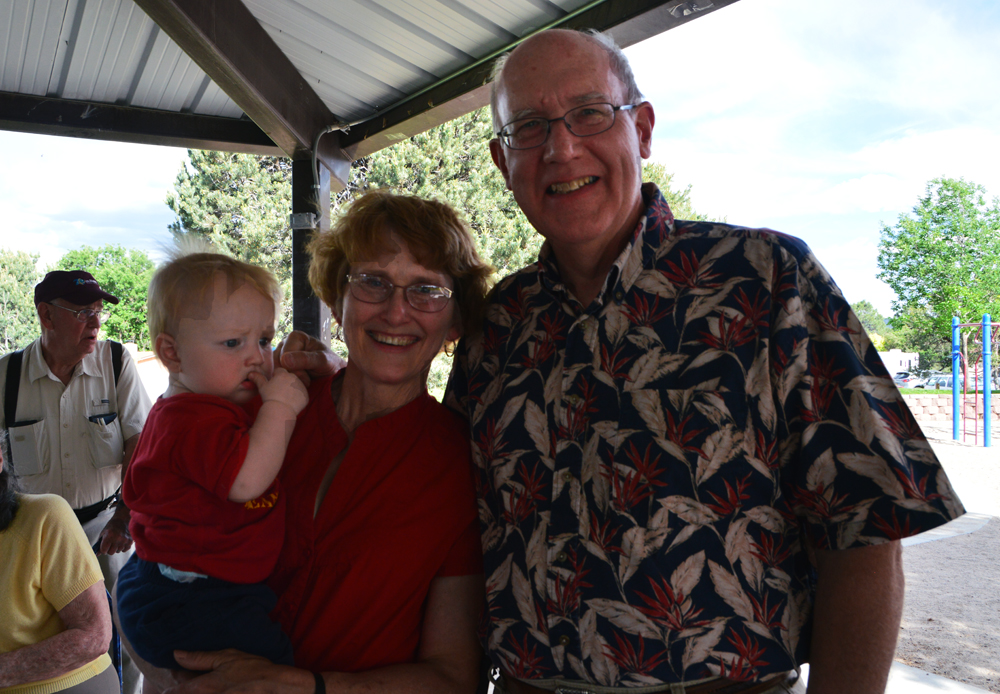 Prior to Monday’s forum getting underway, superintendent candidate Dr. Chris Marczak’s wife gets in some quick texting at the back of the Speech Theater at LAHS. Photo by Carol A. Clark/ladailypost.com 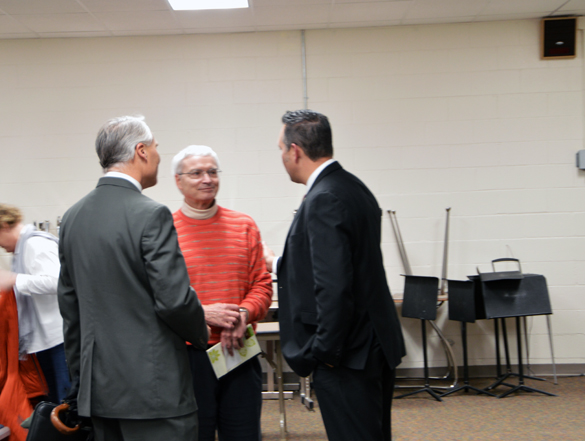 From left, former school board member Kevin Honnell and superintendent search committee member Bill Wadt speak with Dr. Chris Marczak prior to the start of Monday’s forum. Photo by Carol A. Clark/ladailypost.com 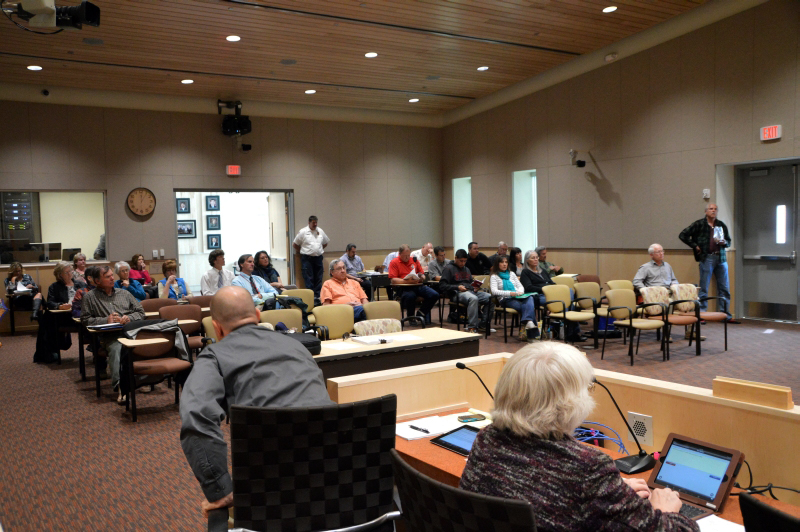 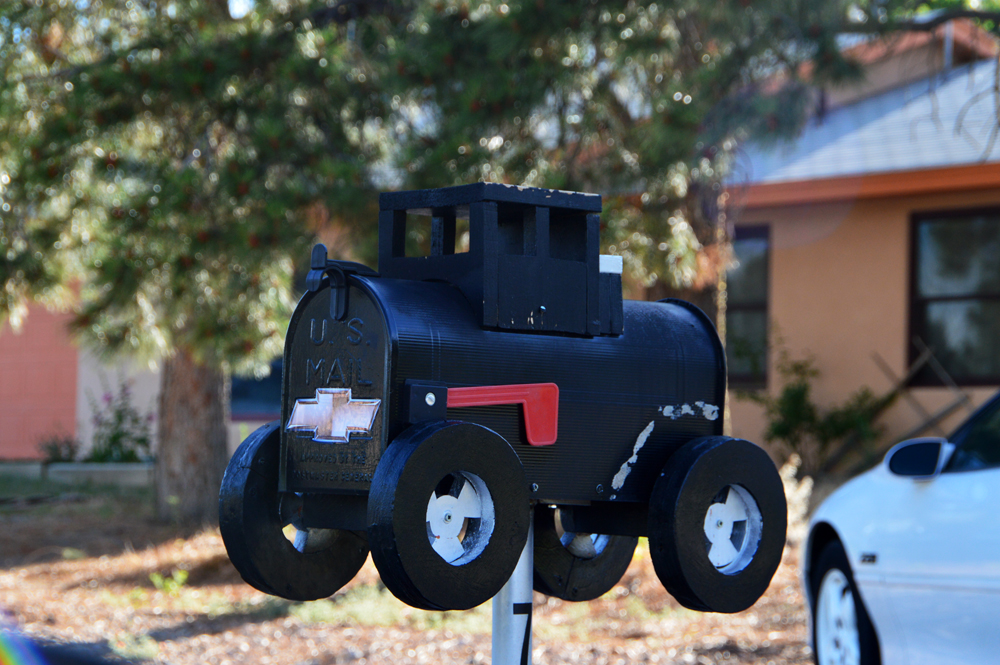 Audience members at Monday’s forum. Photo by Carol A. Clark/ladailypost.com 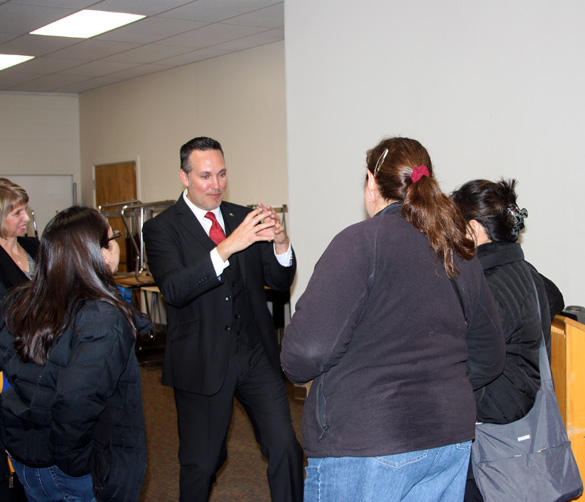