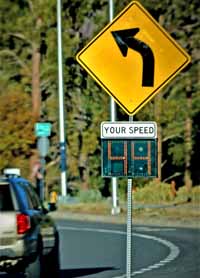 Like any community issue, to effect any positive change takes collaboration and responsibility from multiple parties. Each group should take on the responsibility and ask the question, ”What can I do to promote safety?”

LAPD began 2022 with an emphasis on a traffic safety campaign called “Be Visible” in response to several serious crashes that occurred in 2021. The year saw several cyclists struck by vehicles in Los Alamos County, had a pedestrian fatality crash, a motorcycle fatality, and a serious traffic crash with multiple serious injuries and a fatality.

LAPD purchased and distributed highly visible reflectors and lights for pedestrians, pets and cyclists and have been distributing them at events such as LAFD’s Wildfire Day in April, Los Alamos County’s Bike-to-work day in May, and Safety Town. The Los Alamos Bike Team and School Resource Officers have taught bicycle safety to incoming kindergartners at Safety Town and have conducted bicycle rodeos.

The Los Alamos Patrol Officer’s have been addressing areas of citizen complaints with traffic enforcement and have been using data from speed shield signs to combat speeding. It is important for our community to understand the laws related to pedestrians, cyclists and motorists. “We all occupy the roads and sidewalks and should travel with courtesy and a conscious effort to see others and be seen.” –LAPD.

Accurate crash reporting supports NMDOT with funding and decision making with respect to improving highways and traffic controls. LAPD transitioned to the TraCS software that is supported by NMDOT several years ago. This program has increased the validation of the New Mexico Uniform Crash Reports and statistics are complied by the University of New Mexico, which are delivered to NMDOT to assist in decision making across the state.

LAPD Deputy Chief Oliver Morris was asked to join the New Mexico State Traffic Records Coordinating Committee (NMSTRCC) in the fall of 2021. The vision of the STRCC is to support the continuous reduction of traffic-related crashes, fatalities, and injuries in New Mexico. This is accomplished by facilitating cooperative human and agency resources, increasing technological capacities, and integrating existing data systems that can be used to perform analyses supporting the strategic and performance-based goals in the State Highway Strategic Plan (SHSP) and Highway Safety Improvement Program (HSIP).

“One of the most concerning trends nationally is the increase of traffic fatalities over the past two years,” according to the National Highway Traffic Safety Administration (NHTSA) traffic fatalities reached a 16 year high in 2021,” Deputy Chief Morris said.

After LAPD received its second CALEA Accreditation this spring, a report was compiled from an assessor that recommended four additional officers to the Los Alamos Police Department. These positions were approved by the Los Alamos County Council during budget hearings in 2022. LAPD will place one additional officer on all four Patrol Shifts, which will have an increased impact in the ability to address traffic enforcement in more areas of the County.

The Los Alamos Police Department is actively recruiting to fill these positions and is accepting applications at here.

The most recent concerns from citizens have been related to the recent crash involving a cyclist on N.M. 4. LAPD will not comment on this active investigation at this time, however, LAPD is increasing patrols in highly trafficked areas for cyclists.

N.M. 4 between the bottom of the truck route through Bandelier to the back gate has severely degraded over the past several years. Motorists experience a large amount of rumbling while traversing this area.  Traveling at higher speeds reduces the ability to brake and maneuver particularly on this section of the state highway. Motorists in this area should use extreme caution not only for cyclists but for wildlife and obstructions in the roadway.