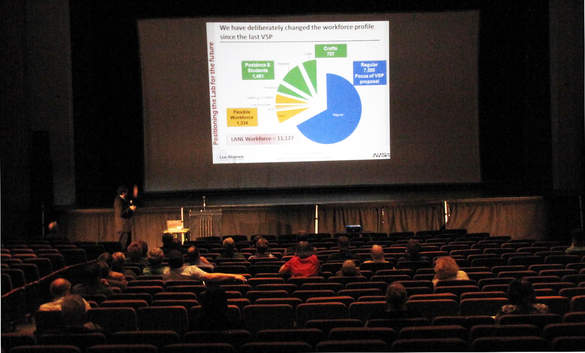 On March 1, the National Nuclear Security Administration approved the plan to reduce the Laboratory workforce by 400 to 800 employees this spring through a VSP. 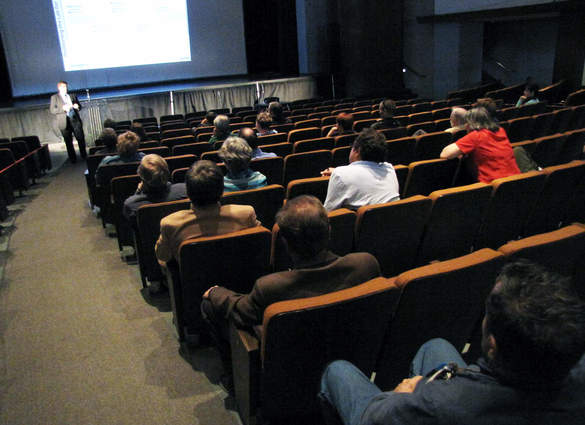 Eligible employees from LANL’s regular workforce began applying for voluntary separation March 5. The process is scheduled to complete with employees departing by April 5. 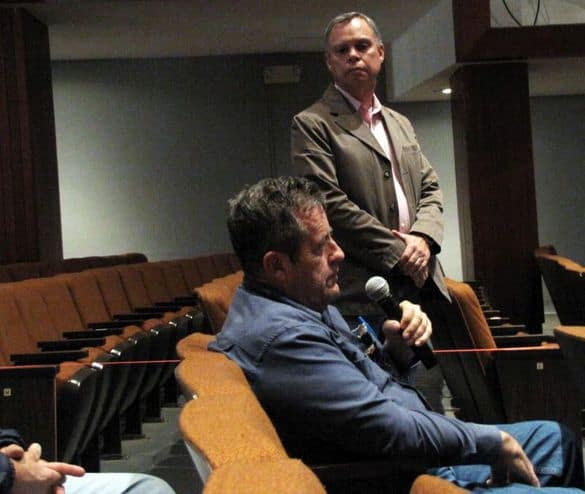 Deputy Director Johnny Martinez of LANL’s Community Programs Office passes a microphone to an audience member during the forum’s Q & A segment. Photo by Carol A. Clark/ladailypost.com

“Our system is attacked 2.5 million times a day,” Wallace said. 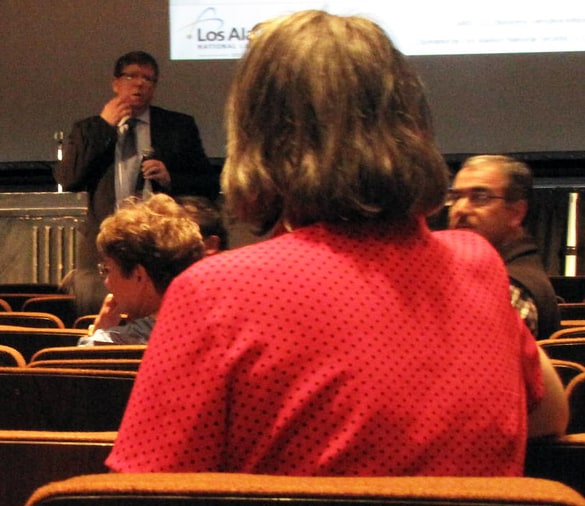 Terry Wallace listens to an audience member’s question. Photo by Carol A. Clark/ladailypost.com

In addition to the VSP, LANL officials plan to cut about $150 million from the $900 million it spends for goods and services, of which approximately $200 million of that amount is spent in Northern New Mexico.

“We may have to renegotiate some deliverables … I think every national laboratory and probably every national program will be under tremendous economic stress over the next four years,” Wallace said.

Wallace told the audience that he understands how deeply personal this situation is to employees.

He also said that the Lab wants to continue to pay market value for its workforce.

“We believe that’s the right thing to do,” he said.

Eric Fairfield asks whether the Lab is in a death spiral and is assured that it is not. Photo by Carol A. Clark/ladailypost.com

During the question and answer segment of Wednesday’s forum, a woman asked whether LANL would maintain active clearances for individuals wishing to return as guest scientists.

Declining to address the clearance issue, Wallace told her that the Lab embraces the guest scientist program.

“On the 11th of April, we’ll (still) have a vigorous guest scientist program,” he said.

Another question addressed whether the Lab will shrink its footprint and pull in its operations that rent space in the townsite.

“We want to reduce the footprint of Los Alamos no matter what … we have to evaluate it … in some cases renting space is the best thing we can do,” Wallace said.

Because the Lab’s budget has been cut, Gross Receipts Tax it pays to Los Alamos County and the state is being reduced.

People expressed worry about what will happen if not enough people opt to voluntarily separate or if too many people opt to leave. What if they go through the agony of making the decision and are then told they aren’t eligible?

If 900 people opt to separate and all of N Division wants to leave, they won’t be incentivized, Wallace said.