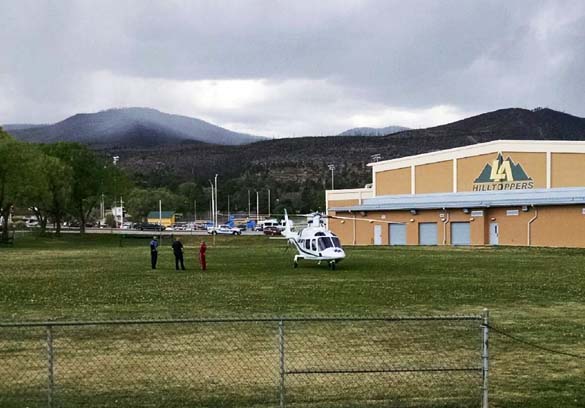 Not knowing how many individuals might require air transport Sunday to UNM Hospital in Albuquerque; a backup helicopter was dispatched and landed on the lawn of Los Alamos High School. As it turned out, just one employee was transported to Albuquerque and the other eight were treated at LAMC. Courtesy photo

A spokesperson for Los Alamos National Laboratory told the Los Alamos Daily Post today that the employee burned in Sunday’s accident at Technical Area-53 remains in critical but stable condition at UNM Hospital in Albuquerque.

The accident occurred at an electrical substation that provides power to various facilities at TA-53. Eight other employees were taken to Los Alamos Medical Center Sunday and seven were released the same day. The eighth employee remained at LAMC for observation and was released Tuesday.

“Laboratory Director Charlie McMillan and others ask that employees continue to keep their injured colleague and his family in their thoughts,” the Lab spokesperson said.

He added that a joint DOE/LANL Accident Investigation Board has been formed. The Laboratory is committed to learning exactly what happened to prevent a recurrence of such an event, he said.

Shortly after the accident occurred Sunday, LANL’s Communications and Public Affairs Office issued a memo to employees. The memo stated that during preventive maintenance operations at the Los Alamos Neutron Science Center (LANSCE), a Laboratory employee was burned while working at an electrical substation. The employee was transported offsite for medical treatment and is listed in critical condition.

Eight other employees also were transported to Los Alamos Medical Center in connection with the accident; seven of those employees were later released, and one employee remains at LAMC for observation.

“We are deeply concerned about the serious medical condition of the worker who was injured in an electrical accident this Sunday,” McMillan said. “Nothing is more important at this time than his well-being. On behalf of the entire workforce at Los Alamos, I would like to express our hope for a full recovery and our sympathy and support to his family at this very difficult and trying time.”

LANL’s Communications and Public Affairs Office will continue to issue updates on the injured employee and progress in the investigation into the cause of the accident. 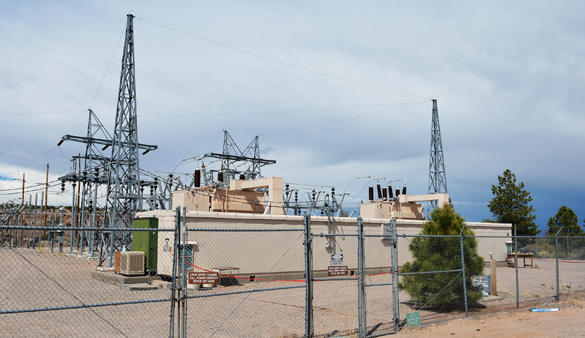 The site of Sunday’s accident is this electrical substation located at Technical Area 53. Courtesy/LANL