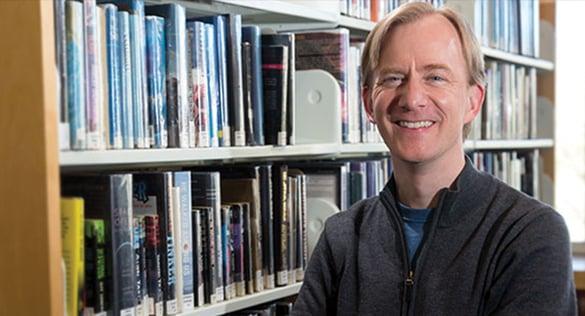 Ian Tregillis is physicist by day and novelist at night. Courtesy/LANL

Laboratory physicist Ian Tregillis, of the Plasma Theory and Applications group, spends his work days on physics validation of the models in simulation codes. Nights and weekends, he invents his own.

Outside the Lab, with seven novels published and an eighth underway, Tregillis has enjoyed remarkable success with his writing. The book review magazine and website Kirkus called the Milkweed series “an imaginative tour de force.” NPR Books said The Mechanical, the first volume in the Alchemy Wars trilogy, “is as intricate and exquisite as the clockwork wonders it brings to life.” He also won high praise from George R. R. Martin—the author of the Song of Ice and Fire series of fantasy novels (which spawned the HBO series Game of Thrones) and now Tregillis’ literary compadre called him “a major talent.”

The right place at the right time

Still, Tregillis admits—and this might be the physicist in him drawing on his understanding of the interplay of chance and determinism— “you make your own luck” by recognizing and seizing opportunities, putting yourself into the right place at the right time.

Coming to New Mexico was a right-place move. Tregillis had earned his bachelor’s and doctoral degrees in his home state from the University of Minnesota. When he arrived in Los Alamos for a postdoc position in 2002, having left friends and family a thousand miles behind, he had time on his hands. So, he wrote.

“My writing career has unfolded entirely during my time at the Laboratory,” he said.
Though he dabbled in creative writing classes in college and was encouraged to pursue it, he did not.

“I don’t know why,” he said. “I had the misconception that the time would come when I had the time. As I got older and more mature, I realized I’d have to make the time.”

Starting from scratch, he began with short stories, sitting down with his laptop and piles of reference books at the kitchen table.“I had to move my laptop to have dinner,” he said.

Soon he joined an online writing workshop, traded critiques with other authors and learned the basics of his craft. In 2005 he was accepted into a six-week residential writing program in Michigan.

“I was very, very lucky to work in a group at the Lab that allowed me to take a leave of absence to attend a writing workshop,” Tregillis said.

One of the instructors, who liked his work and happened to be from New Mexico, invited Tregillis to join the Santa Fe sci fi writers group, Critical Mass, which included Martin, Melinda Snodgrass, and other luminaries.

“The group was tremendously helpful,” he said. He began a novel and, on the group’s advice that it was too big, expanded it into a trilogy. In another bit of luck-meets-opportunity, he found a literary agent who liked his writing and found a publisher, Tor, for what became the Milkweed Trilogy. His writing career took off.

Given the mental demands of a day job in computational physics, Tregillis worked out a disciplined approach to his fiction work. His book contracts typically give him a year to submit a draft, so he estimates the book length and calculates how many pages he must produce per day to meet the deadline, writing two or three hours at night—or early in the morning, if the cat wakes him up—and all day on Saturdays. When he finishes a draft, he sets it aside to cool before polishing it and sending it off to the publisher. Next comes another round of revisions based on the editor’s comments.

In 2015, Tregillis turned in the third and final Alchemy Wars installment, called The Liberation, for Orbit Books.

Finishing a book, he said, is satisfaction enough, whatever its fate in the marketplace. “I just do it for the joy and the feeling of accomplishment,” Tregillis said.

That’s underscored by his plans for his next novel, which, he says “is just for me.”

It’s a weird idea, he thinks, but he does not care. And he will not discuss details.

“Sharing an idea jinxes it. Once you put it into someone else’s head, it’s no longer yours. It’s not incubating in isolation,” he said.

As he eases into that story, he will be filling a folder with notes, ideas, inspiring clips and remembered dreams.

“It’s all grist for the mill,” he said. “It rattles around in the back of your head. Then two unrelated ideas will bang together and stick together and you have critical mass. Suddenly you have the nucleus of a story.”

And, after a year of nights and weekends, Tregillis will have another novel.

Ian Tregillis is a computational physicist in Plasma Theory and Applications.