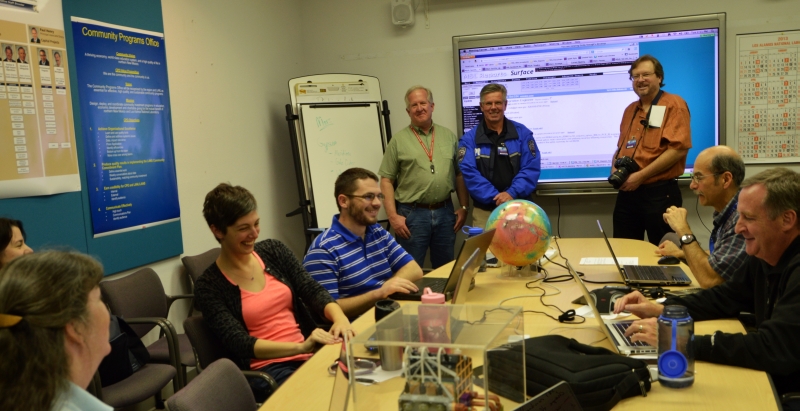 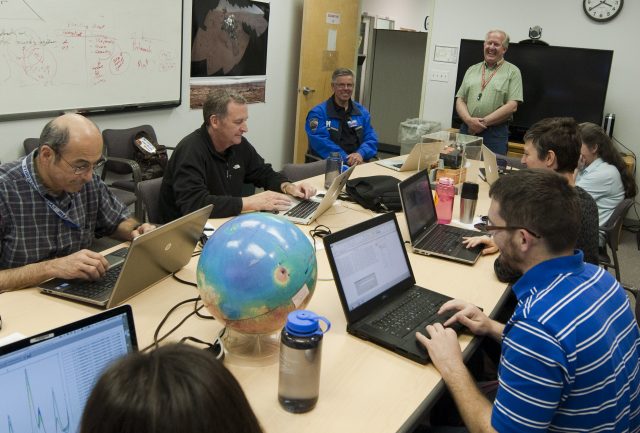 Los Alamos Police Chief Wayne Torpy keeps his hands to himself as he sits with members of the ChemCam team Tuesday as they prepare to send the day’s set of commands to the Jet Propulsion Laboratory in Pasadena, Calif., for uploading to the Curiosity Mars Rover. Photo by Greg Kendall/ladailypost.com

It was all taken in good fun when media outlets contacted the Lab for details about the accident, only to be told that it was an April Fool’s Day prank put on by the Los Alamos Daily Post.

Team members work at a long table in a large conference room developing commands for ChemCam – describing where to shoot its laser in order to analyze the chemical makeup of selected rocks on Mars.

The job of programming ChemCam’s next laser shots is shared with another team in France.

Every two weeks the teams swap the job of developing commands for ChemCam.

During the two weeks that the French team takes control over ChemCam, the Los Alamos team has time to work on research, review results and publish reports.

Two weeks later it’s back to the conference room for the Los Alamos team in order to create the next set of commands for ChemCam.

During Tuesday’s visit, the team was glued to their computer screens as they prepared the day’s ChemCam commands.

There is no fancy control room with TV monitors, blinking lights and control panels, there isn’t even a guy with a mohawk haircut, instead the team does their work on their laptop computers.

A large flat screen TV at one end of the conference room displays scrolling ChemCam commands that are shared with the Jet Propulsion Laboratory in Pasadena, Calif.

At the other end of the room is another large flat screen TV with a video camera mounted at the top. This flat screen is used to video conference with the sister team in France.

On Tuesday, the team was on a teleconference with JPL and scientists from the around the world who are working on the Curiosity Rover Project.

Torpy was careful to keep his hands in his pockets. He described how he had checked his computer early Monday morning, knowing that it was April Fool’s Day, to see what he was going to be dealing with.

Los Alamos Daily Post columnist Greg Kendall has included the Chief in many of his annual April Fool’s Day gags. Last year, Torpy was described as leading a tour of “underground” Los Alamos tunnels with then Councilor Sharon Stover.

Torpy received many calls from interested parties asking if they could go on the underground tour.

The Chief noted that by Tuesday, he had received about 40 inquiries about his Curiosity Rover mishap.

Torpy was ready this year, having seen the story early in the morning. He is undergoing a vigorous rehabilitation program after recent heart valve surgery and said he was met with jokes and laughter as he arrived for his workout Monday.

“I’m doing great,” Torpy said. “I’ve been feeling really good in the last two weeks as I heal. I’m a runner and I was in great physical shape before my heart valve replacement. Being in good physical condition has allowed me to recover quickly.”

The ChemCam system is one of 10 instruments mounted on the Curiosity rover—a six-wheeled mobile laboratory that will roam more than 12 miles of the planet’s surface during the course of one Martian year (98 Earth weeks.)

ChemCam can fire an extremely powerful laser pulse up to 23 feet onto an area the size of a pinhead. The laser vaporizes a tiny portion of the target.

A spectrometer then translates the spectral colors of the plasma into the chemical composition of the vaporized material.

The ChemCam team is comprised of researchers from Los Alamos National Laboratory and the French space agency, Centre National d’Etudes Spatiales, as well as other researchers from the U.S., France, Canada, and the United Kingdom.

ChemCam operations are now commanded from centers at Los Alamos and Toulouse, France. 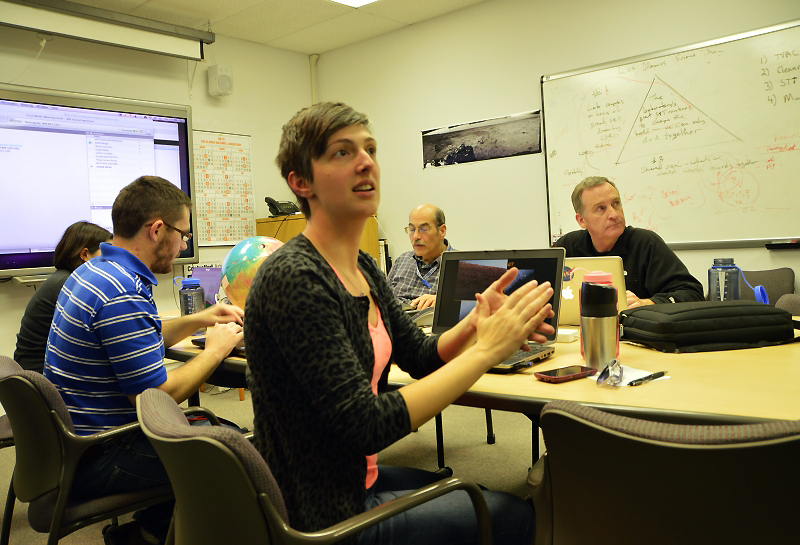 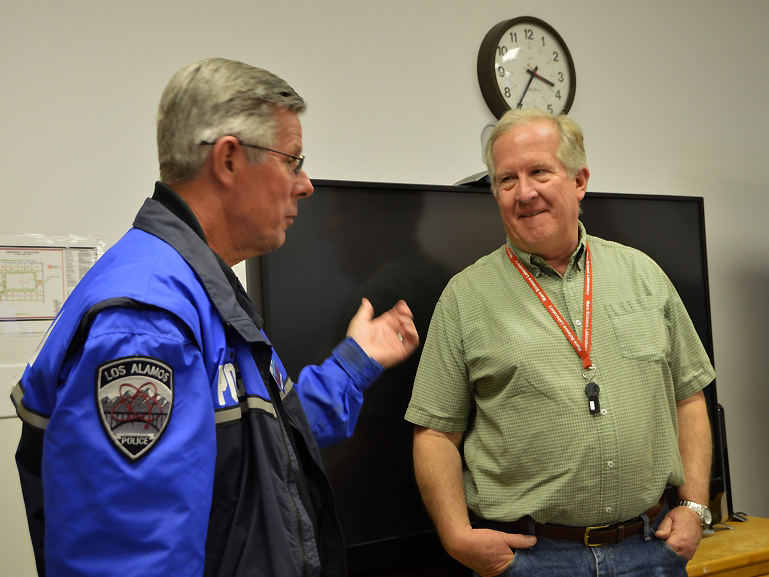 Los Alamos Police Chief Wayne Torpy describes to Operations Manager Bruce Barraclough how he was minding his own business when suddenly everyone began asking him how exactly he disabled the Curiosity rover. Photo by Carol A. Clark/ladailypost.com 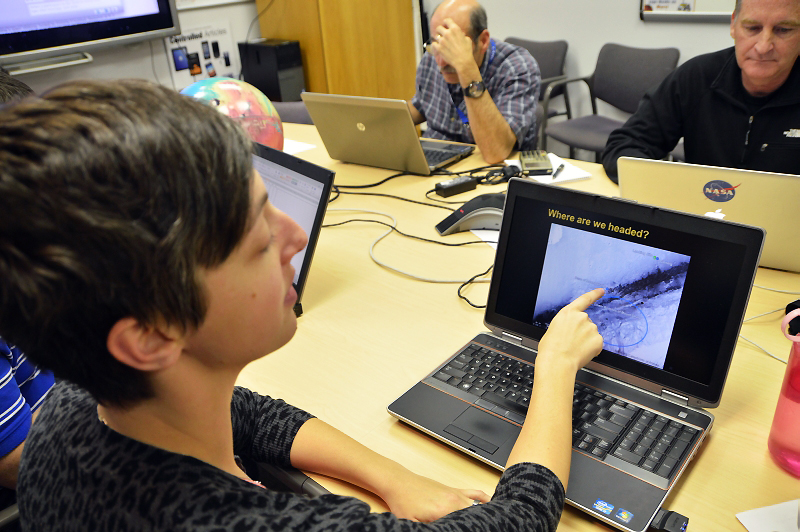 ChemCam Team member Nina Lanza points to where the Curiosity rover is headed now. Photo by Carol A. Clark/ladailypost.com