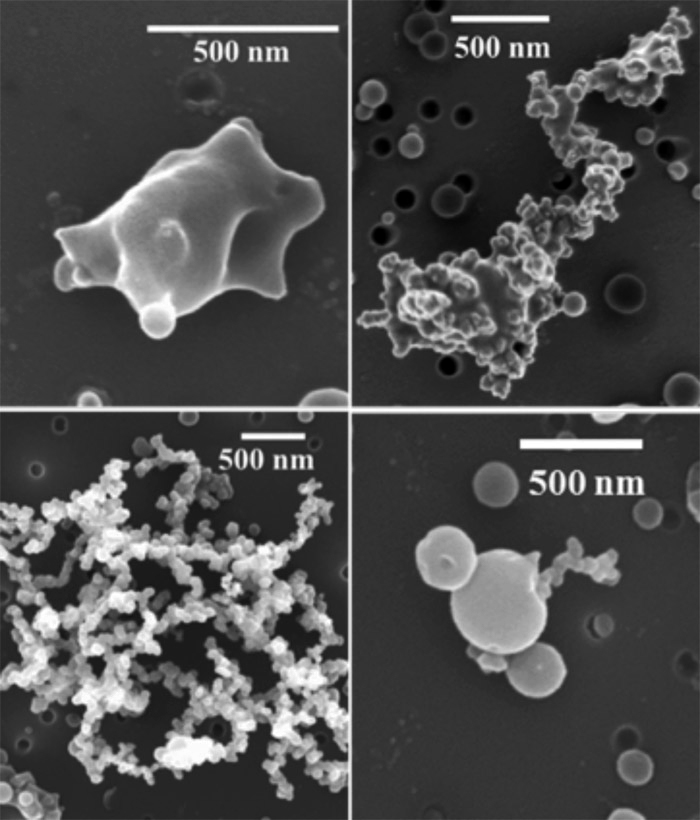 Mixing and classification of soot particles. Field-emission scanning electron microscope images of four different categories of soot particles: (a) embedded, (b) partly coated, (c) bare and (d) with inclusions. Approximately 50 percent of the ambient soot particles are embedded, 34 percent are partly coated and 12 percent have inclusions. Only 4 percent of the particles are bare soot (not coated or very thinly coated). Scale bars, 500 nm. Right, spherical tar balls dominate in the emissions. Courtesy/LANL

Wildfires produce a witch’s brew of carbon-containing particles, as anyone downwind of a forest fire can attest.

A range of fine carbonaceous particles rising high into the air significantly degrade air quality, damaging human and wildlife health, and interacting with sunlight to affect climate. But measurements taken during the 2011 Las Conchas fire near Los Alamos National Laboratory show that the actual carbon-containing particles emitted by fires are very different than those used in current computer models, providing the potential for inaccuracy in current climate-modeling results.

The Las Conchas fire emissions findings underscore the need to provide a framework to include realistic representation of carbonaceous aerosols in climate model, the researchers say. They suggest that fire emissions could contribute a lot more to the observed climate warming than current estimates show.

“The fact that we are experiencing more fires and that climate change may increase fire frequency underscores the need to include these specialized particles in the computer models, and our results show how this can be done,” Dubey said.

Conventional wisdom is that the fire-driven particles contain black carbon or soot that absorbs sunlight to warm the climate, and organic carbon or smoke that reflects sunlight to cool the climate. But in a paper just published in Nature Communications the scientists from Los Alamos and Michigan Technological University analyzed the morphology and composition of the specific aerosols emitted by the Las Conchas fire.

Las Conchas, which started June 26, 2011, was the largest fire in NM history at the time, burning 245 square miles. Immediately after Los Alamos National Laboratory reopened to scientists and staff, the team set up an extensive aerosol sampling system to monitor the smoke from the smoldering fire for more than 10 days.

Furthermore, the bare soot particles, which are composite porous fractal structures made of tiny spherical carbon, are modified significantly by the organics emitted by the fire. About 96 percent of the soot from the fire is coated by other organics substances, with 50 percent being totally coated. Furthermore, the complexity of the soot can be categorized into 4 morphological structures as “embedded,” “partly coated,” “with inclusions” and “bare.”

What was missing from the modeling and why it matters

Why is this important for climate? Dubey noted that, “Most climate assessment models treat fire emissions as a mixture of pure soot and organic carbon aerosols that offset the respective warming and cooling effects of one another on climate. However Las Conchas results show that tar balls exceed soot by a factor of 10 and the soot gets coated by organics in fire emissions, each resulting in more of a warming effect than is currently assumed.”

“Tar balls can absorb sunlight at shorter blue and ultraviolet wavelengths (also called brown carbon due to the color) and can cause substantial warming,” he said. “Furthermore, organic coatings on soot act like lenses that focus sunlight, amplifying the absorption and warming by soot by a factor of 2 or more. This has a huge impact on how they should be treated in computer models.”

This experimental research was funded by the U.S. Department of Energy’s Office of Science. 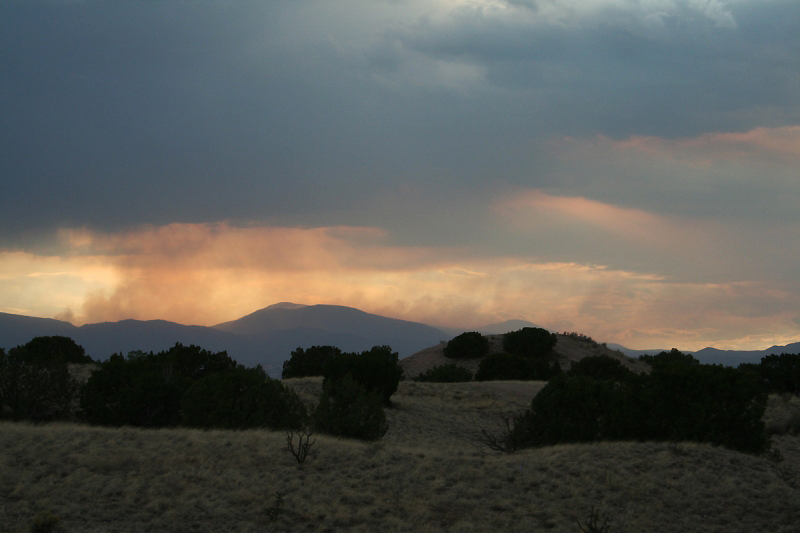 Haze of smoke emanating from the 2011 Las Conchas Fire. Photo by M. Dubey