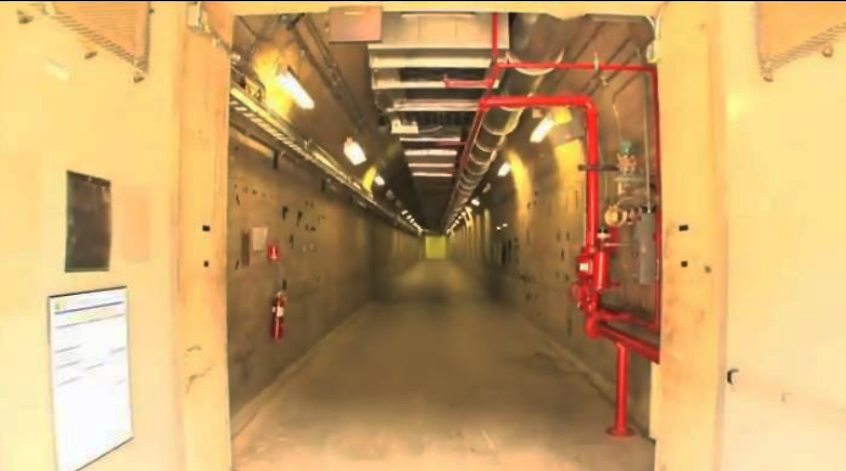 Down a remote canyon near Los Alamos National Laboratory lies a facility known as the “Tunnel Vault,” once one of the most secret and secure locations in the United States, it’s the original post-WWII nuclear stockpile storage area.

Located in Los Alamos Canyon at Technical Area 41, the Tunnel Vault was built between 1948 and 1949. The facility has a formidable security perimeter, a hardened guard tower — complete with gun ports and bulletproof glass — and a series of gates and doors that lead to a 230-foot long concrete tunnel that goes straight into the canyon wall.

At the end of the tunnel is a large alcove room with a single bank vault door. Through that door is a vault built inside a vault with five storage areas, all protected with identical bank vault doors. All these features can be seen on a video that tours the recently declassified, historically significant facility available on the Los Alamos National Laboratory YouTube.

The video also features commentary by Ellen McGehee, the Laboratory’s historic facilities manager, Alan Carr, Lab historian, and Glen McDuff, a weapons scientist who worked at various times in the facility and later operated a classified museum there.

Over the years the Tunnel Vault was also used as a nuclear materials and nuclear fuel storage area, a weapons research and development laboratory, weapons components storage, and nuclear material assembly for tests both in the Pacific and in Nevada.

“This facility had a long history during the cold war. So this was definitely a top secret, very secure location,” McGehee said.

About halfway down the tunnel is a side room that was used for early development of unclassified research that led to the discovery of the neutrino — work that later won a Nobel Prize in physics — a lab space ideal for the work because it’s buried 300-feet deep underground.