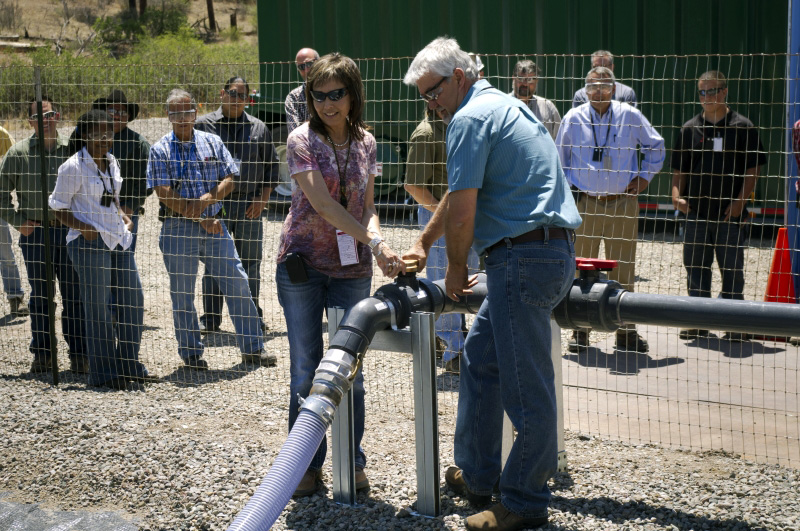 Cheryl Rodriguez of NNSA’s Los Alamos Field Office and Dave McInroy of Los Alamos National Laboratory turn the valve necessary to release treated groundwater into a man-made reservoir. The effort is part of a pump and treat test of chromium-contaminated groundwater. Courtesy/NNSA

Los Alamos National Laboratory environmental program experts are one step closer to determining the best way to remediate a chromium plume in groundwater beneath Mortandad Canyon.

Members of the National Nuclear Security Administration (NNSA) and Laboratory environmental cleanup offices began pumping tests last week at the well known as R-42. The well is east of the lab’s Technical Area 55. These tests are the first key steps directed at addressing the chromium contamination.

Juan Griego, deputy manager of NNSA’s Los Alamos Field Office, congratulated the employees working on the project. “It’s an honor to be here today to represent the NNSA in this important endeavor,” he said as employees opened the valve from which treated water spilled into a fenced-off reservoir. “Congratulations for taking on the challenge and getting us to where we are today.”

“This is a critical step in our move from investigation to remediation,” said Jeff Mousseau, associate director of the Laboratory’s environmental programs directorate, pointing out R-42 is one of several wells that will contribute to the effort.

The pumps pull contaminated groundwater from the plume, through a treatment system and into a reservoir from which samples are taken to determine properties of the treated water. If the treated water meets regulatory standards, it is then sprayed on the land nearby.

The R-42 well pumps seven gallons a minute from the plume, 24 hours a day, seven days a week, and the test will be run for 2-3 months. Following the test on the R-42 well, a similar test will be run on the R-28 well also located in the plume. Data gathered throughout the process will provide environmental scientists with information to propose a remediation plan to the New Mexico Environment Department. Data will include chromium concentrations in the groundwater and the impact of pumping on the larger, regional aquifer.

The Laboratory discovered the plume in late 2005 and immediately began investigating the nature and extent of the contamination. The chromium was used from 1956 – 1972 in the cooling towers of a power plant as was standard industry practice at the time. Chromium was flushed from the cooling towers into the canyon where it eventually infiltrated the regional aquifer.

More information, including investigative data and reports, is available at www.intellusnmdata.com and the lab’s electronic reading room.

Chromium occurs naturally in the environment in two forms, trivalent, Cr(III), and hexavalent, Cr(VI). The Environmental Protection Agency identifies chromium in groundwater as having potential adverse health effects when ingested at concentrations in excess of the drinking water standard. Chromium in the groundwater plume at LANL is hexavalent chromium. See the EPA Web site for additional information.