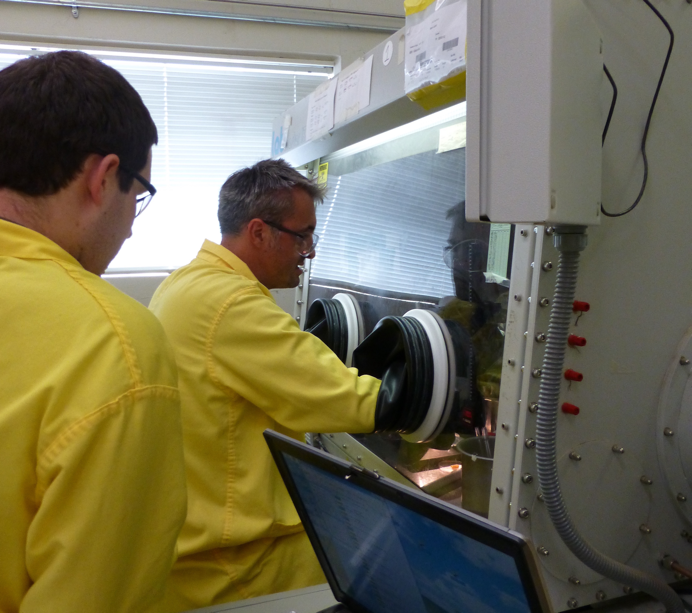 Scientists from LANL and University of California-Irvine explore a new oxidation state of plutonium. Courtesy/LANL

Researchers at Los Alamos National Laboratory in collaboration with the University of California – Irvine (UCI) have uncovered a significant new chemical attribute of plutonium, the identification and structural verification of the +2-oxidation state in a molecular system.

“This finding marks out plutonium, already known for its extremely complex chemistry, as the actinide element with the largest number of confirmed oxidation states,” said Andrew Gaunt, lead Los Alamos investigator on the project along with Stosh Kozimor.

The finding also provides a significant step towards a more complete understanding of chemical trends across the actinide series — the stuff of textbooks — and, ultimately will provide knowledge about how to manipulate and control oxidation-state chemistry and electronic structure.

Six oxidation states are known and have been verified: 0 (metallic form) and +3, +4, +5, +6, +7 in molecular systems. The current work, just published in the Journal of the American Chemical Society, demonstrates that a seventh formal oxidation state (+2) has now been accessed and verified, representing an unexpected new chemical form of plutonium.

“Over time, it’s easy to get bogged down in the daily, but important, details of more incremental experiments and analyzing data, but this project was the kind of research experience and more profound fundamental discovery that excites,” said Gaunt. “This is exactly the kind of plutonium chemistry that the Laboratory is uniquely positioned to achieve in conjunction with academic collaborators.”

The research was built on prior work at (UCI) by collaborating professors William Evans and Filipp Furche that showed the +2 oxidation state of lanthanides (Ln), uranium and thorium could be generated using organometallic anions (cyclopentadienyl rings) to facilitate reduction of molecules containing a +3 metal cation to molecules containing a +2 metal cation (metal = Ln, uranium or thorium).

These +2 molecules were shown to be accessible on account of the ‘organometallic framework’ around the metal ion, which allows the extra electron upon reduction of +3 to +2 to populate a ‘d’ rather than an ‘f’ orbital, which is unusual. A graduate student, Cory Windorff, from the Evans’ group at UCI spent a year at Los Alamos working in a specially equipped radiological laboratory with Gaunt to develop and apply a similar methodology with the much more radioactive isotope of Pu-239.

Following successful isolation of the molecule containing Pu-+2, calculations by Furche and student Guo Chen revealed that, “unlike in the lanthanide, uranium and thorium analogs, plutonium appears to exhibit an intriguing electronic structure ‘crossover point’ with the extra electron primarily residing in an ‘f’ orbital, not a ‘d’ orbital,” said Gaunt.

“Elucidating the nature of this electronic structure ‘break’ in actinide +2 cations as the actinide series is traversed was previously inaccessible, but we have now made the breakthrough and the area is brimming with potential for further exploration,”  Kozimor noted.

“Working with the highly radioactive elements beyond uranium (called the transuranics) is extremely technically challenging, given limited availability of isotopes of these elements and the safety protocols under which the research must be conducted, but we have now paved the way for future discovery of additional transuranic molecules containing the +2 oxidation state,” Kozimor said.

Said Gaunt, “Seeing the color change from blue to deep purple upon reduction of a plutonium +3 molecule, and knowing that if the experiment was a success then I would be the first person in the world to see a new formal oxidation state for an element with my own eyes, was quite riveting.”

“The moment bought back the feeling of what attracts many chemists to the field in the first place,” Gaunt continued. “It’s the kind of fundamental chemistry we perform at high school or as an undergraduate, making different oxidation states of elements such as transition metals, and marveling at the ‘cool’ color changes — except in this case, it was with a rare and highly radioactive isotope in specialist radiological facilities at a national laboratory, and an element for which not too long ago few would have believed Pu(II) could be generated, isolated, and characterized.”

Funding: The Los Alamos portion of the work was supported by the U.S. Department of Energy (DOE) Office of Science.