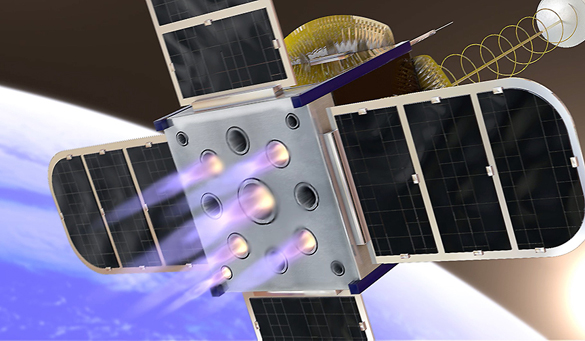 Researchers at Los Alamos National Laboratory have developed a rocket motor concept that could pave the way for CubeSats zooming across space. These small, low-cost satellites are an easy way for scientists to access space, but are lacking in one key area, on-board propulsion.

“The National Academy of Sciences recently convened a meeting to look at science missions in CubeSats,” said Bryce Tappan, an explosives chemist at Los Alamos National Laboratory and lead researcher on the CubeSat Propulsion Concept team, “and identified propulsion as one of the primary categories of technology that needs to be developed.”

The Los Alamos team recently tested a six-motor CubeSat-compatible propulsion array with tremendous success. A video depicting the program is available at https://youtu.be/VeSdGMi7md4.

“I think we’re very close to being able to put this propulsion system onto a satellite for a simple demonstration of propulsion capability in space,” Tappan said.

The primary roadblock to CubeSat propulsion has always been safety. Typical spacecraft propulsion systems utilize fuels that are intrinsically hazardous, like hydrazine, or compressed gasses.  Since CubeSats are usually deployed via “rideshare” or “piggyback” on a larger satellite deployment or other large space mission, even a small margin of risk is unacceptable.

“Obviously, someone who’s paying half a billion dollars to do a satellite launch is not going to accept the risk,” Tappan said. “So, anything that is taken on that rideshare would have to be inherently safe, no hazardous liquids.”

The rocket propulsion concept that Tappan is developing is a solid-based chemical fuel technology, but differs from classical solid propellants because it is completely non-detonable, making it much less hazardous.

The technology is called a “segregated fuel oxidizer” system where the solid fuel and solid oxidizer are kept completely separate inside the rocket assembly. Mixed fuel and oxidizer systems are much more common and significantly more unstable.

“Because the fuel and oxidizer are separate,” Tappan said, “it enables you to use higher-energy ingredients than you could use in a classic propellant architecture. This chemical propulsion mechanism produces very fast, high-velocity thrust, something not available with most electrical or compressed gas concepts.”

The rocket motor works in many of the same ways as a conventional chemical rocket motor.  A pyrotechnic igniter provides the heat to initiate burn in a high-nitrogen, high-hydrogen fuel section, releasing gasses very rich in hydrogen.  Those gasses flow into the oxidizer section and the chemical reaction there creates tremendous heat and expanding gasses that flow through a nozzle creating the bulk of the motor’s thrust.

“Propulsion is desirable on CubeSats because it’s an enabling technology that greatly expands the mission-space of these small satellites,” Tappan said. “It would allow CubeSats to enter higher orbits or achieve multiple orbital planes in a single mission, and extend mission lifetimes. Another desirable application would be a ‘de-orbit’ capability.”

NASA currently tracks approximately half a million individual pieces of “space junk” in various orbits around Earth. Eventually small satellites will have to demonstrate a compelling mission before they can be launched, or have a de-orbit capability so they can burn up in the atmosphere and not add to the space junk problem.

“Down the road,” Tappan said, “I would really like to see this actually flying on important missions in space. Not only simple things like de-orbiting, but in groundbreaking missions like taking a small spacecraft to the moon, or even to somewhere as far away as Mars.”