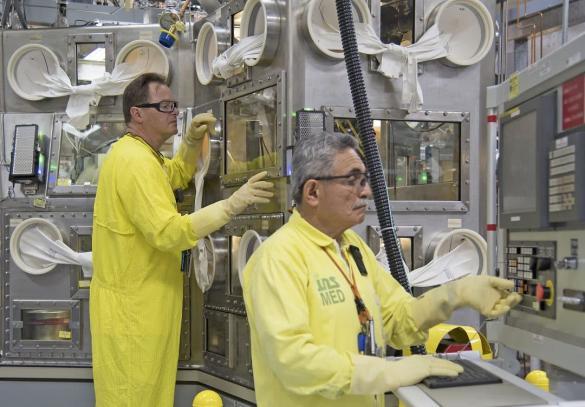 Los Alamos National Laboratory spokesman Matt Nerzig responded this morning to two recent reports filed by Defense Nuclear Facility Safety Board on-site inspectors at LANL’s Plutonium Facility in May – one identifying skin contamination on a craft worker’s hands and the other process deviations.

May 14, a work team declared a potential deviation when the total mass of nuclear material listed for a glovebox was less that the actual amount it contained. The report states that criticality safety personnel determined the glovebox to be safe as the actual material present was in compliance with the limits. The DNFSB report states that the inaccurate mass total was due to negative plutonium value in the location’s account in the nuclear materials controls and accountability system, which resulted in a nonconservative and inaccurate total. It states facility management has directed the use of more detailed inventory listings while corrective actions are pursued with the software used for the process.

May 16, a DNFSB report stated that a craft worker performing an exit survey discovered skin contamination on his hands and that follow-up surveys found contamination on the personal protective equipment of the other crew members. It states that radiological control personnel controlled the room, successfully doffed and decontaminated all impacted individuals and performed follow-up surveys in the work area.

The report indicates that the work crew had been installing clean piping underneath a glovebox and that the most likely source of the contamination spread was from the breach of a contaminated system. Facility management paused all pipefitter work while corrective actions are executed, the report said.

Nerzig said all employees were successfully and thoroughly decontaminated — mostly by washing off the contamination with water.

“None of the workers received any measurable dose, and there was no risk to the public. The facility’s safety systems worked as designed,” he said, adding that the Lab’s work with nuclear materials on behalf of the country is complex, challenging and comes with inherent risks.

“The safety systems and procedures in place at the Laboratory’s plutonium facility are designed to greatly reduce the risk to Laboratory employees, the public and the environment, and make it the safest place for this type of work,” Nerzig said.

Earlier in May, the DNFSB report stated that workers placed a container of plutonium salts in a glovebox where the criticality safety posting only allowed plutonium oxide or metal. While later reviewing procedural changes, the report states that the first line manager observed that the location did not permit the salts and initiated the “potential process deviation process”. It states that the workers involved in the event stated that they believed the salts were allowed because they were not explicitly forbidden by the posting. It notes that operations in this particular laboratory room recently underwent two federal readiness assessments and the criticality safety days pause.

The report states that management revoked fissile material handler certification for the work crew involved and is currently conducting oral boards prior to their reauthorization for work as well as broadly assessing fissile material handler training based on “apparent weaknesses exposed by this and other recent conduct of operations events”. It says management and nuclear criticality safety personnel learned that “storage of salts was occurring in this glovebox even though the operation includes a specialized storage box that has allowance for storing salts”. As a result, an effort to map process flows across all glovebox locations that support the pit manufacturing flowsheet was initiated to ensure alignment between operations, criticality safety, and other safety programs, the report states.

Asked about the incident, Nerzig said few process deviations at the Laboratory’s plutonium facility indicate a safety problem or failure, that in most cases, the exact opposite is true.

“Self-reporting is a best practice that we encourage as a sign of a healthy, continuously improving, safety culture,” he said.

He added that the process deviation in this case did not create a criticality safety risk and posed no significant safety risks to workers or the public.

“Criticality safety experts analyzed the introduction of this material form into the glovebox and determined it was safe and stable. The Lab’s self-reporting of such events provides an opportunity to review procedures and, if necessary, refine them to further enhance our wide safety margins,” Nerzig said.

He said the Laboratory’s goal is to identify and control hazards throughout all its functions and appropriately engage workers and management.

“The Lab operates within defined safety envelopes with well understood risks, hazards and controls for each activity – especially those involving nuclear materials,” he said.