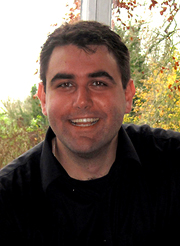 Ludmil Alexandrov, of the Theoretical Division at Los Alamos National Laboratory, made strong points this week in the journal Science about the basic formation of human cancers, winning a 2015 Science & SciLifeLab Prize, on “Understanding the Origins of Human Cancer.”

“I have always been passionate about solving complex genomics puzzles and applying my skills towards better understanding the mechanism underlying cancer development,” said Alexandrov, Oppenheimer Fellow at Los Alamos. “It is a great honor to be recognized as one of the winners of the 2015 Science & SciLifeLab Prize,” he said. “This recognition would not have been possible without the help and mentorship from my team and colleagues. I am extremely excited about the future of cancer research at Los Alamos National Laboratory as we have the opportunity to apply the incredible computational resources of the Lab for analyzing large biomedical datasets and developing effective cancer prevention strategies.”

Starting in 2013, SciLifeLab collaborated with AAAS and Science magazine, co-funded by the Knut and Alice Wallenberg Foundation. The international prize is awarded annually to four young scientists for outstanding life science research for which he or she earned a doctoral degree in the previous two years.

An essay based on the candidate’s doctoral thesis is submitted to the editorial board of Science and four winners are selected and invited to the entire Nobel week in Stockholm for a prize ceremony and to interact with the SciLifeLab community. Alexandrov’s essay will appear today in the online edition of Science, winning in the genomics and proteomics category.

Alexandrov notes in his essay, “My Ph.D. thesis provided a basis for deciphering mutational signatures from cancer genomics data and developed the first comprehensive census of mutational signatures in human cancer. The results reveal the diversity of mutational processes underlying the development of cancer and have far-reaching implications for understanding cancer etiology, as well as for developing cancer prevention strategies and novel targeted cancer therapies.”

Alexandrov is an Oppenheimer Fellow in the Theoretical Biology and Biophysics Group at Los Alamos. He earned his Bachelor of Science degree in Computer Science from Neumont University and received his Master’s of Philosophy in Computational Biology as well as his Ph.D. in Cancer Genetics from the University of Cambridge.

He is a recipient of the 2015 Weintraub Award for Graduate Research and, in 2013, he was listed by Forbes magazine as one of the “30 brightest stars under the age of 30” in the field of Science and Healthcare. His work is focused on understanding the mutational processes responsible for human cancer and human aging. In 2015, his research was highlighted by the American Society of Clinical Oncology as an important step forward in the fight against cancer.

See more about the award at http://scienceprize.scilifelab.se/.