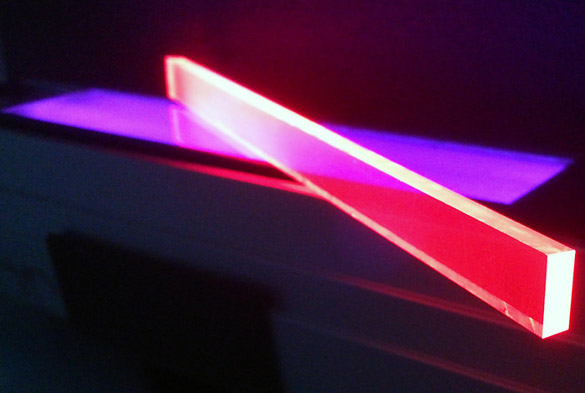 Researchers from around the world are gathering this week in Santa Fe to reflect on two decades of quantum dot research at a special topical conference, “20 Years of Quantum Dots at Los Alamos.”

The conference is hosted by the New Mexico Consortium and its program committee includes several past and present members of the Nanotechnology and Advanced Spectroscopy Team (NanoTech team) of the Chemistry Division of Los Alamos National Laboratory.

“This research, which started two decades ago with a handful of fragments of semiconductor-doped colored glasses, has evolved into a wide-ranging program spanning different areas of quantum dot science from synthesis and spectroscopy to theory and devices,” said Victor Klimov, the NanoTech team’s leader and the founder of the Laboratory’s quantum dot program.

Klimov gave a special introductory address at the conference with his personal perspective on the field’s evolution.

Quantum dots have been at the center of many early developments in what is now commonly called nanoscience and nanotechnology. Quantum dots are tiny specs of semiconductor matter that are a few nanometers across. The focus of the nanotech team’s research has been on particles fabricated via colloidal chemistry, known as colloidal or nanocrystal quantum dots.

“Because of their size-controlled electronic properties and chemical flexibility, quantum dots can be viewed as ‘artificial atoms’ that can be engineered on demand to address a specific physical problem or a need of a certain application,” Klimov said.

Over nearly two decades, quantum dot scientists have driven the evolution of colloidal quantum dots from a subject of laboratory curiosity to a versatile class of materials exploited in a wide range of emerging technologies such as e-book readers and television sets.

The Los Alamos NanoTech team’s research has revealed many unexpected and unusual optical and physical properties of quantum dots, showing that they behave quite differently than bulk solids when it comes to capturing photons or emitting light.

Additionally, the Los Alamos team made the first practical demonstration of a new all-inorganic quantum dot LED architecture, which holds promise for the realization of robust and durable devices with highly stable performance.

Most recently, the Laboratory quantum dot researchers successfully exploited the ideas of “interface engineering” for alleviating the problem of efficiency roll-off at high currents in quantum dot LEDs.

Two for the price of one

An important breakthrough reported by the NanoTech team is discovery of carrier multiplication in quantum dots, the process whereby absorption of a single photon produces multiple electron-hole pairs. Potentially, it can boost the efficiency of solar-energy conversion in both photovoltaics and generation of solar fuels.

The pioneering work of the Los Alamos team transformed carrier multiplication from a theoretical concept for exceeding fundamental limits in solar-energy conversion into a technological reality.

Watch this video to learn more on quantum dots.

Capitalizing on advances in understanding of how nanoparticles interact with light, the Los Alamos quantum dot team in 2008 developed a proposal that led to establishment of the Center for Advanced Solar Phototophysics, (CASP) led by Klimov, and funded in 2009 by the U.S. Department of Energy as part of the nationwide initiative in Energy Frontier Research Centers.

The mission of CASP is to harness the unique properties of quantum-confined semiconductor materials for facilitating the realization of the next generation of low-cost, high-efficiency solar photoconversion systems.

The “20 Years of Quantum Dots at Los Alamos” conference brings together researchers from all over the world to reflect on this history of advancements in colloidal quantum dots, examine the very latest developments in the field and discuss the next steps toward the future of these materials.

The plenary lectures will be delivered by Louis Brus of Columbia University, Michael Graetzel of Ecole Polytechnique Federale De Lausanne, and Arthur Nozik of the National Renewable Energy Laboratory, the researchers who pioneered many early advances in the quantum dot science and the nanoscience in general. A full list of plenary and invited speakers is here; a conference program can be found here.

Los Alamos’ Laboratory Directed Research and Development Office, the DOE Office of Science, the Office of Naval Research, and UbiQD, LLC have provided the funding for the conference.