LANL Profile: Physicist Donald Sandoval Is A Master Of The Loom 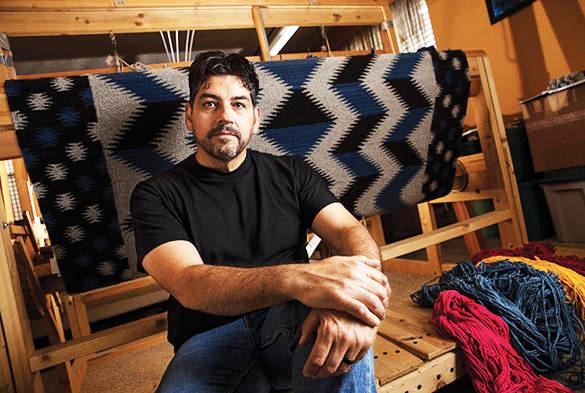 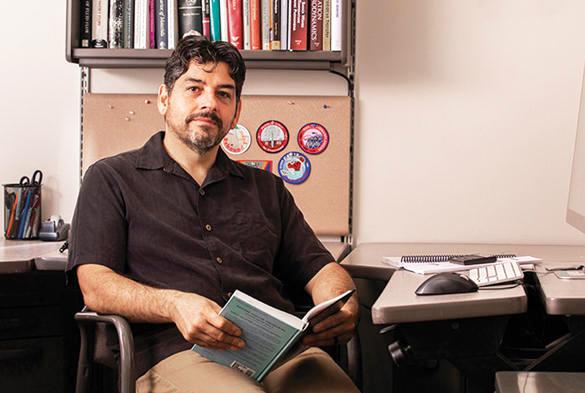 LANL News:
Donald Sandoval, of Los Alamos National Laboratory’s Primary Physics group, stands before a loom made by his father and weaves a tapestry. The weaving process itself is not too complicated but does take time, so Sandoval’s mind tends to wander. His thoughts often venture to his day job as a mechanical engineer supporting the Lab’s national security mission. Sandoval said he has often solved complicated engineering and mathematical problems while working at the loom.
More than 30 years ago, Sandoval earned a bachelor’s degree in electrical engineering. While working on his undergraduate degree, Sandoval secured an internship at Los Alamos under noted theoretical physicist Frank Harlow. Harlow introduced Sandoval to the field of computational fluid dynamics, and Sandoval was hooked.
“I finished my undergraduate degree at New Mexico State University, but even at that time I found myself more interested in mechanical engineering because of my work with Dr. Harlow,” Sandoval said. “For my master’s and doctorate, I switched to mechanical engineering. I focused my dissertation on fluid mechanics, and it’s something that I continue to explore to this day.”
Science for national security applications
Sandoval’s father worked at the Laboratory for more than 30 years in one of the old computing groups in what’s now the High Performance Computing Division. Growing up, Sandoval knew about the Lab’s principal mission, and as he grew older, he wanted to contribute to ensuring America’s national security. Once he received his doctoral degree, Sandoval joined the Laboratory as a full-time staff member, getting his chance at last to make his contribution.
“I work in the Primary Physics Group, which performs analyses related to stockpile stewardship,” he said. “I mostly work with legacy designs. Right now, I lead the primary physics effort to rebuild the primary in the W88 Alt 370 program—these nuclear warheads are deployed on the U.S. Navy’s Trident Submarine-launched Ballistic Missile system.”
Sandoval believes that a combination of education and experience enables him to remain essential to the Laboratory for more than 30 years now. In addition to his formal education, Sandoval cites his work with Harlow as a critical influence. Sandoval was also one of the first graduates of the Laboratory program known as TITANS, the Theoretical Institute for Thermonuclear and Nuclear Studies. TITANS’s goal is to sustain the cadre of nuclear weapons scientists who are well grounded in nuclear weapon science, design, and analysis.
“I would say that I harness my understanding of the physics and engineering associated with nuclear weapons every day that I am on the job,” Sandoval said. “Long ago, I was an intern learning from Frank Harlow. Today, I share my experience to help others achieve key milestones and mentor the group’s younger members so that they can also contribute to the Lab’s mission.”
Fifth-generation weaver
Before going to graduate school at the University of Washington, Sandoval did not have a full understanding of his family’s artistic background. For him, mathematics and science were things he could relate with his father.
“I knew my family had been in Northern New Mexico for several generations, with my grandparents growing up in Truchas,” he said. “My first year of graduate school I was pretty lonely, as I did not know anyone. These were the days before the internet, so I went to the library and started researching New Mexico. It was during this research that I discovered the involvement of my family in the arts, particularly with the works created by the santeros.”
Sandoval found that his own grandfather had been Hermano Mayor (Major Brother) for the Truchas Penitente Morada, that his grandmother had been a weaver and that his own father built weaving looms. Excited by all this newfound knowledge, Sandoval began to spend his summers in New Mexico learning how to weave on the loom, dye his own wool with naturally made pigments and even paint retablos, devotional paintings of Roman Catholic saints. With his father’s help, Sandoval learned the basics—the rest was practice to gain experience.
“I’m a fifth-generation weaver,” Sandoval said, “and now I am teaching my youngest daughter how to weave so that she can carry on the tradition.”
Sandoval today is known at the Santa Fe Spanish Market for tapestries with bold colors and design elements grounded in tradition but also with a modern flair. He has participated in the annual Spanish Market since 1994, winning numerous awards and selling various pieces to museums that span from El Rancho de las Golondrinas in Santa Fe to England.
When it comes to the arts and the sciences, Sandoval notes that one common thread between them is what he calls the mathematics of design.
“It’s about patterns,” he said. “Rather than think in terms of pure mathematics, I am able to touch upon the creative side of problem solving. I then use that side of my thinking process and apply it to any technical challenges at work. I usually analyze the technical patterns from a creative perspective and that in turn helps me come to a creative yet science-based solution.”
This article first appeared in National Security Science magazine and that the rest of the issue ca be viewed can be viewed here.
Menu
Los Alamos
91°
Sunny
5:48am8:23pm MDT
Feels like: 91°F
Wind: 8mph ENE
Humidity: 6%
Pressure: 29.77"Hg
UV index: 7
TueWedThu
90/64°F
91/64°F
88/64°F
Weather forecast Los Alamos, New Mexico ▸