With pen and ink, artist Michael E. Martinez of Los Alamos’ Detonation Science and Technology group takes to paper, beautifully crafting a bleached skull with a headdress inspired by the American Plains Indians. To give it a New Mexican theme, he uses the Zia symbol for the skull’s eyes and accents the smooth face and war bonnet with turquoise coloring. Emblazoned on the New Mexico flag, the Zia symbol originated with the Zia people.

“I come from a creative family,” Martinez said. “When I was a kid, I would watch my grandpa make almost anything. My grandpa, he was like the Hispanic ‘MacGyver,’ he could make anything from what he had to help him. He found ways to make tools to work in his garden, to keep his truck going, anything like that.”

Martinez tapped into his own creativity early, learning to express himself by drawing. As a teen, he and his brother Adam (who works in the Neutron Science & Technology group at the Lab) would work on lowrider cars.

“We just did not have the money back then to have someone do a custom paint job for the cars,” he said, “so my brother and I usually wound up painting them ourselves. I worked on the designs and that led to trying my hand at illustration and painting.”

As is common with artists, Martinez uses his past and present experiences to inspire his illustrations and paintings. His particular style and flair come from the rich cultures thriving in New Mexico. For example, in 2016 he created the official t-shirt design for Zozobra that is burned during the annual Fiesta de Santa Fe. In 2017, he illustrated Zozobra again, this time for the official Evergreen Zozobra Poster.

“New Mexico culture is more than inspiration to me,” Martinez said. “I’ve grown up as part of it. My whole family participates in the arts and crafts festivals, making artistic items to sell. At one time we even had a little shop in Española, where my family would sell their crafts.”

Martinez has found that the bulk of his commissions fall into traditional categories, such as paintings of religious icons, Catholic symbolism and symbols personifying death.

Despite these requests, Martinez said he always looks for less-traveled roads to keep his art fresh and edgy.

“I try to do something different all the time,” he said. “So, even for a holiday like Dia de los Muertos, which brings with it a lot of symbols, I try to introduce my own thoughts and give the illustrations a modern approach.”

His artwork uses a variety of approaches, from traditional acrylics to modern mixed media and computerized graphic design. He has received many awards for this work, including the Contemporary Hispanic Market First Time Exhibitor award.

In 2016, Martinez formed a design company to get his artwork more exposure.

“Before I decided to venture into the commercial world, I did paintings here and there, mostly for family and friends,” he said. “In 2013, I had back surgery, so for a while I wasn’t as active as I was before. Anyway, one day my kid came home after school saying he needed to do a drawing, so I helped him out. My wife Candie saw the drawing and asked why I didn’t paint more. She was the one who inspired me to get a design company going. I also started entering more art shows, and since then things have really taken off.”

Martinez is a featured artist at Keep Contemporary Gallery on the Santa Fe Plaza. He has upcoming shows at the Annual Dia de los Muertos Show (Oct. 27-Dec. 15).

He also often works for charitable causes. For example, he created a t-shirt design for the Pueblo of Pojoaque Toy Run, contributes artwork to associations that raise money to help underprivileged children and works with Buffalo Thunder for the Food Depot of Santa, a non-profit organization.

His latest exploration is in different types of media.

“I am working with new types of resins to give my paintings more dimension,” he said. “I like different metals, woods and other elements—I haven’t done a canvas painting in a while because I am exploring all these new elements. It’s all experiment, it’s all new and different, but it’s all me.” 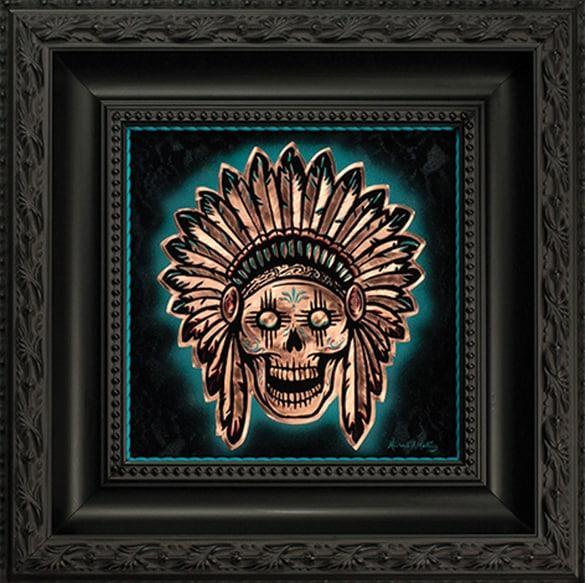 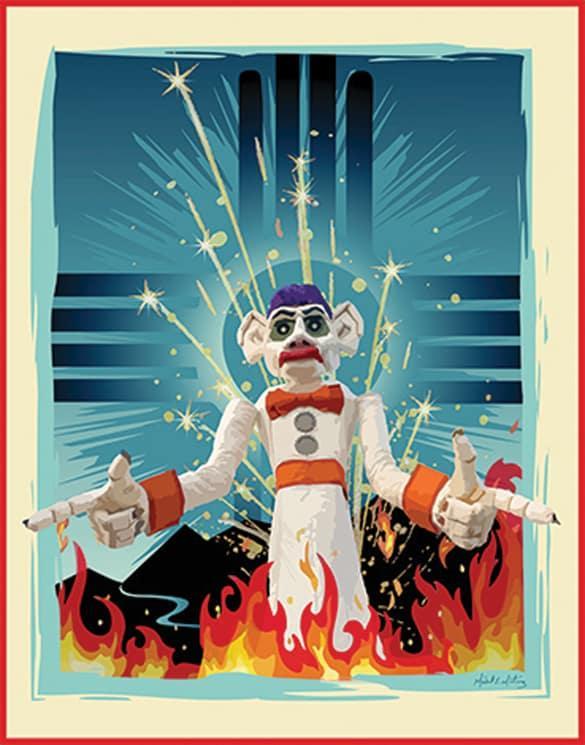