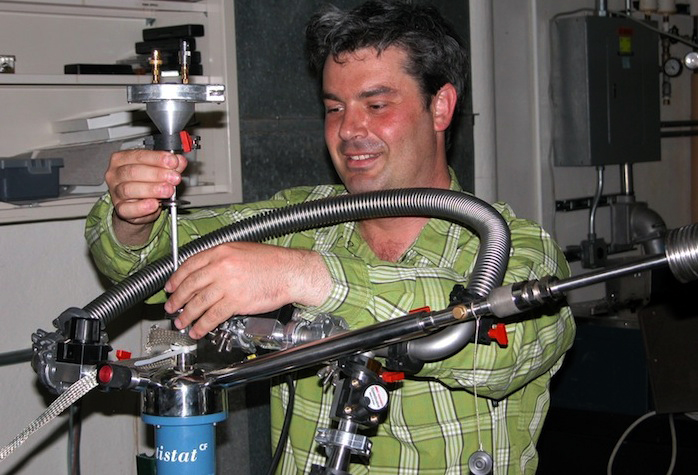 Arkady Shekhter setting up the resonant ultrasound measurement in a flow cryostat. Courtesy/LANL

Described by an international team including Los Alamos scientists in this week’s Nature magazine, the research explored a compelling question in superconductivity, that of the strange metallic behavior of copper oxide (cuprate) materials in the pseudogap, at temperatures well above the onset of superconductivity (95 degrees Kelvin). Thousands of research papers have been written on the topic of the pseudogap in the 27 years since high-temperature superconductivity was discovered, and still there has been no consensus on exactly what was happening to cuprate materials in this temperature range.

Although there was evidence for a partial gapping of the electronic density of states, no evidence had previously existed as to whether the pseudogap is a distinct phase, or a continuous evolution of physical properties as superconductivity is approached.

Catching up on the whole “phase of matter” definition, the question was similar to wondering at an atomic level what exactly happens to an ice cube as it warms to a new phase, liquid water, and warmer still, to vapor. Each of these physical phases is bounded by phase transitions as molecules shift into the new phase. And copper oxide superconductors were doing something odd in one of those transitions: This paper explains what and why.

News flash: The pseudogap is indeed a phase of matter. Albert Migliori, LANL Fellow and Seaborg Institute director noted that, “the key effects were so small that extreme attention to eliminating spurious signals combined with our low noise measurement revealed effects that were previously hidden.”

The new research reports that the pseudogap is a thermodynamic phase, and for the first time extends the territory of the pseudogap into the superconducting state. This puts strong constraints on possible theories of high-transition temperature (high-Tc) superconductors, which now must reconcile the presence of the pseudogap as a phase transition. It also supports a mechanism for high-Tc related to quantum-critical fluctuations.

The technical challenge of measuring with sufficient precision to make these observations was enormous, team members noted. Prior to Los Alamos Postdoctoral Fellow Arkady Shekhter’s endeavors, Migliori’s team at LANL was already the world leader in resonant ultrasound spectroscopy. Yet “order of magnitude” advances in the technology had to be made to resolve the pseudogap transition in examining crystals of yttrium barium copper oxide (YBCO).

Essential to the precision of the results was the only-recent availability (from University of British Columbia) of tiny, perfect single crystals for the experiment. Better vibration isolation, stricter temperature stability, and new measurement algorithms to enable faster and more dependable data acquisition – all were critical to cracking the cuprate pseudogap code, and it worked. The team was able to measure the elastic properties of these submillimeter crystals with an accuracy of parts per million.