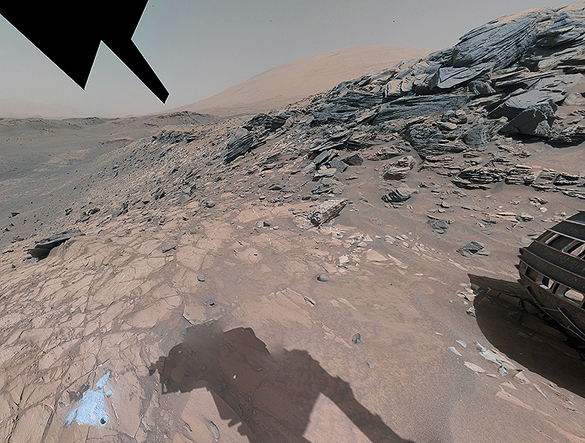 View from Marias Pass in Gale crater, Mars, where scientists found high concentrations of silica in the light toned bedrock seen in the lower half of the image. The Buckskin drill hole where the mineral tridymite was detected is visible in the lower left part of the image. Mount Sharp (Aolis Mons), the mountain in the center of Gale Crater is seen in the background, and the right front wheel of the Curiosity rover is seen to the right in the image. The image is made up of a number of smaller images by Curiosity’s arm-mounted camera. Courtesy/NASA/JPL-Caltech/MSSS

New findings by NASA’s Mars Curiosity rover are the focus of a press conference this morning at the American Geophysical Union (AGU) meeting in San Francisco, Calif.

A group of scientists, including one from Los Alamos National Laboratory, revealed that the Curiosity rover found much higher concentrations of silica at some sites the rover has investigated in the past seven months than anywhere else it has visited since landing on Mars 40 months ago. Silica makes up nine-tenths of the composition of some of the rocks.

“The high silica was a surprise,” said Jens Frydenvang of Los Alamos National Laboratory and the University of Copenhagen, also a Curiosity science team member. “While we’re still working with multiple hypotheses on how the silica got so enriched, these hypotheses all require considerable water activity, and on Earth high silica deposits are often associated with environments that provide excellent support for microbial life. Because of this, the science team agreed to make a rare backtrack to investigate it more.”

The first discovery was as Curiosity approached the area “Marias Pass,” where a lower geological unit contacts an overlying one. ChemCam, the rover’s laser-firing instrument for checking rock composition from a distance, detected bountiful silica in some targets the rover passed along the way to the contact zone. The ChemCam instrument was developed at Los Alamos in partnership with the French IRAP laboratory in Toulouse and the French Space Agency.

Adding information about silica clues was a major emphasis in rover operations over a span of four months and a distance of about one-third of a mile (half a kilometer). It involves many more readings from ChemCam, plus elemental composition measurements by the Alpha Particle X-ray Spectrometeter (APXS) on the rover’s arm and mineral identification of drilled rock-powder samples analyzed by the Chemistry and Mineralogy (CheMin) instrument inside the rover.

Curiosity’s science team is working with two main hypotheses to explain the recent findings on Mount Sharp, both of which require water. Water that is acidic would tend to carry other ingredients away and leave silica behind. Alkaline or neutral water could bring in dissolved silica that would be deposited from the solution. Apart from presenting a puzzle about the history of the region where Curiosity is working, the recent findings on Mount Sharp have intriguing threads to what an earlier rover, Spirit, found halfway around Mars. There, signs of sulfuric acidity were observed.

Adding to the puzzle, some of the silica found at one rock Curiosity drilled, called “Buckskin,” is in a mineral named tridymite, which is found in Bandelier tuff, common in New Mexico but rare elsewhere, and never before seen on Mars. The usual origin of tridymite on Earth involves high temperatures in igneous or metamorphic rocks, but the finely layered sedimentary rocks examined by Curiosity have been interpreted as lakebed deposits.

Curiosity has been studying geological layers of Mount Sharp, starting from the bottom, since 2014, following two years of productive work on the plains surrounding the mountains. The mission delivered evidence in its first year that lakes in the area billions of years ago offered favorable conditions for life, if microbes ever lived on Mars. As Curiosity studies successively younger layers up Mount Sharp’s slopes, the mission is investigating how ancient environmental conditions evolved from lakes, rivers and deltas to the harsh aridity of today’s Mars.

Buckskin was the first of three rocks where drilled samples were collected during that period. The CheMin identification of tridymite prompted the team to look at possible explanations for it: “We could solve this by determining whether trydymite in the sediment comes from a volcanic source or has another origin,”  said Liz Rampe, of Aerodyne Industries at NASA’s Johnson Space Center. “A lot of us are in our labs trying to see if there’s a way to make tridymite without such a high temperature.”

Beyond Marias Pass, ChemCam and APXS readings showed a pattern of high silica in pale zones along fractures in the bedrock, linking the silica enrichment there to alteration by fluids that flowed through the fractures and permeated into the bedrock. CheMin analyzed drilled material from a target called “Big Sky” in bedrock away from a fracture and from a fracture-zone target called “Greenhorn.” Greenhorn indeed has much more silica, but not any in the form of tridymite. Much of it is in the form of noncrystalline opal, which can form in many types of environments, including hot springs, acid leaching and other wet settings.

“What we’re seeing on Mount Sharp is dramatically different from what we saw in the first two years of the mission,” said Curiosity Project Scientist Ashwin Vasavada of JPL. “There’s so much variability within relatively short distances. The silica is one indicator of how the chemistry changed. It’s such a multifaceted and curious discovery, we’re going to take a while figuring it out.”

The ChemCam has just passed 300,000 laser shots on Mars, each of which returns a color spectrum of the resulting plasma.

For more about Curiosity, which is examining sand dunes this month, visit http://mars.jpl.nasa.gov/msl/.