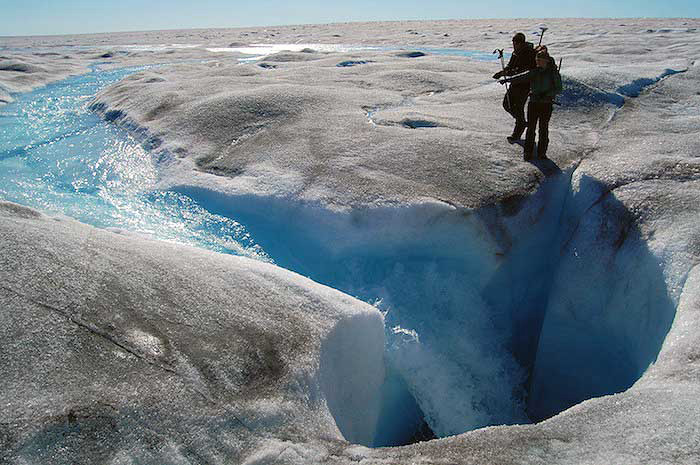 A stream of meltwater on the surface of the Greenland Ice Sheet enters a moulin connecting to the glacier’s bed, 700 meters below. Surface meltwater lubricates the bed and temporarily speeds up the ice sheet’s movement toward the sea every summer. From left, Blaine Morriss (Dartmouth College) and Lauren Andrews (University of Texas). Location: west coast of the Greenland Ice Sheet. Photo by Matt Hoffman/LANL

The effects of increased melting on the future motion of and sea-level contribution from Greenland’s massive ice sheet are not quite as dire as previously thought, according to a new study from an international team of researchers.

In a paper published this month in Proceedings of the National Academy of Sciences (PNAS), the team found that accelerating ice sheet movement from increasing meltwater lubrication is likely to have only a minor role in future sea-level rise, when compared with other factors like increased iceberg production and surface melting. Greenland’s ice sheet is the world’s second largest body of ice. A melt event impacting 97 percent of this ice sheet surface was detected in 2012.

“Scientists have been looking into this mechanism for about a decade now, as a means by which the Greenland ice sheet might decay faster than expected, therefore contributing more to future sea-level rise than when considering the increases in melting alone,” said co-author Stephen Price of the Los Alamos National Laboratory Climate Ocean and Sea Ice Modeling Project team.

The study used new models to test the hypothesis that, as the climate warms and melting of Greenland’s surface increases, so will the availability of meltwater, which lubricates the base of the ice sheet and causes glaciers to slide faster towards the sea.

“This study walks us back from those fears a bit, and argues that we have a better handle—relative to 5-10 years ago—on how much sea-level rise we can expect from Greenland during the next few centuries,” Price said.

In the current study, observations from fieldwork in Greenland were used to derive empirical models for the relationship between increased melting and increased ice speed. These were then incorporated into computer models of ice sheet flow, which revealed that by the year 2200 meltwater lubrication could add a maximum of 8 mm to sea-level rise—less than 5 percent of the projected total contribution from increased melting alone.

“The outstanding capabilities of Los Alamos and our partner national laboratories are critical to this new level of understanding,” said Alan Bishop, Principal Associate Director for Science, Technology and Engineering at Los Alamos.

“This is an important step forward in our understanding of the factors that control sea-level rise from the Greenland ice sheet,” said lead author Sarah Shannon, from the University of Bristol. “Our results show that meltwater-enhanced lubrication will have a minor contribution to future sea-level rise. Future mass loss will be governed by changes in surface meltwater runoff or iceberg calving.”

The U.S. computer modeling teams from Los Alamos, Sandia and Oak Ridge national laboratories conducted the experiments using DOE-developed ice sheet models on high-performance computers at Lawrence Berkeley and Oak Ridge national laboratories. Output from large-scale climate models was first used to predict future changes in surface melting as a result of climate warming. The ice sheet model experiments then quantified the importance of meltwater lubrication on mass loss from the ice sheet to the oceans, relative to the case of increased melting alone.

Regardless of whether more meltwater increased or decreased the speed of ice flow, the overall effect on sea level is small. While this study confirms that increased flow due to increased lubrication does move more ice from the interior of the ice sheet to the margins, it also confirms that some other process, such as increased iceberg calving or increased melting, is then required to move that build-up of ice from the margins to the ocean. In general, processes that might do this are slow.

The findings are part of research undertaken through the European-funded ice2sea program. This work was funded in part by the US Department of Energy’s Office of Science. Earlier research from the program has indicated that changes in surface melting of the ice sheet will be a major factor in sea-level rise contributions from Greenland. In 2007, the fourth Intergovernmental Panel on Climate Change (IPCC) report highlighted ice-sheets as the most significant remaining uncertainty in projections of sea-level rise.