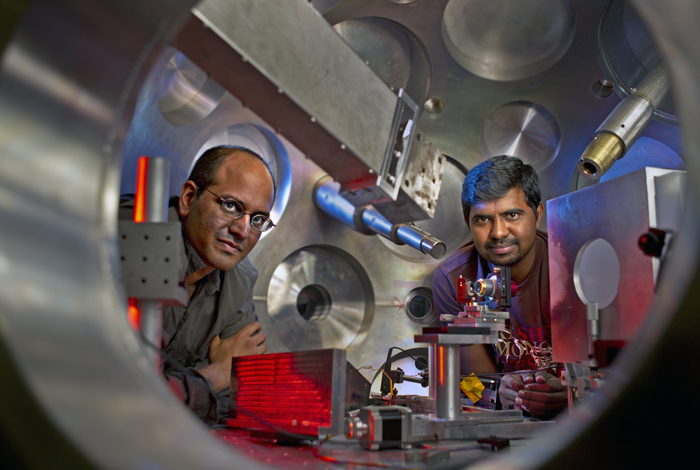 Sasi Palaniyappan, right, and Rahul Shah inside a target chamber where the TRIDENT short pulse laser is aimed at a very thin foil target. Courtesy/LANL

Scientists at Los Alamos National Laboratory have observed for the first time how a laser penetrates dense, electron-rich plasma to generate ions.

The process has applications for developing next generation particle accelerators and new cancer treatments.

The results, published online August 19 in Nature Physics, also confirm predictions made more than 60 years ago about the fundamental physics of laser-plasma interaction.

Plasmas dense with electrons normally reflect laser light like a mirror. But a strong laser can drive those electrons to near the speed of light, making the plasma transparent and accelerating the plasma ions.

“That idea has been met with some skepticism in the field,” said Rahul Shah of LANL’s plasma physics group. “We think that we’ve settled that controversy.” 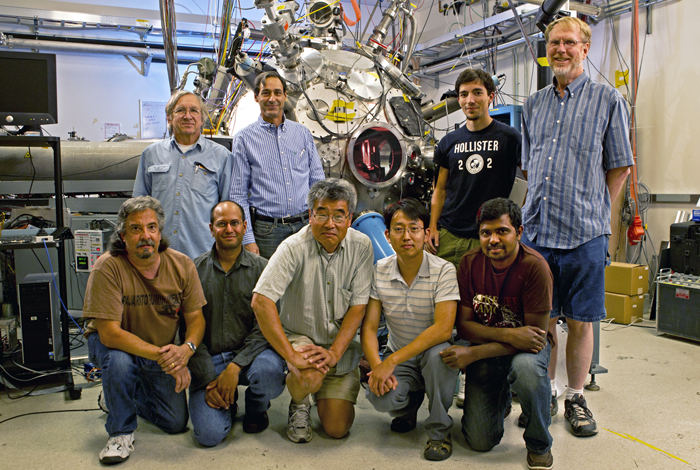 The team, which also included researchers from the Max Planck Institute for Quantum Optics in Garching, Germany and Queens University in Belfast, UK, used the 200 trillion-watt short-pulse TRIDENT laser at Los Alamos National Laboratory to observe the transparency phenomenon at 50 femtosecond resolution.

Until now, those dynamics have been witnessed only in computer simulations.

The team found close agreement between the model and their experiments, which confirms what Los Alamos National Laboratory scientists have long suspected—that directing a short-pulse laser at a very thin carbon foil target will make the foil transparent to the laser.

“In a sense it also validates the simulation code that researchers have been using for some time,” said Sasi Palaniyappan of LANL’s plasma physics group. “At the same time it also tells us that we’re doing an experiment that’s as close as possible to simulation.”

The results will help advance work to control the shape and timing of laser pulses, precision that is necessary for developing next-generation, laser-driven particle accelerators, he said.

The researchers have recently been awarded internal laboratory funding from the office of Laboratory Directed Research and Development (LDRD) to pursue these applications.

They now plan to add a second foil target, which could benefit from further focusing and faster turn-on of the laser light transmitted through the first foil.

One application of the resulting ultra-short ion bunches is to rapidly heat material and study the ensuing dynamics.

This work was sponsored by the Los Alamos National Laboratory Directed Research and Development program, U.S. Department of Energy, the U.S. Office of Fusion Energy Sciences and the U.S. Domestic Nuclear Detection Office.

The paper is titled “Dynamics of relativistic transparency and optical shuttering in expanding overdense plasmas.”

It can be accessed via digital object number http://dx.doi.org/10.1038/NPHYS2390. The DOI can be used to retrieve the abstract and full text (Nature Physics abstracts are available to everyone, full text only to subscribers).