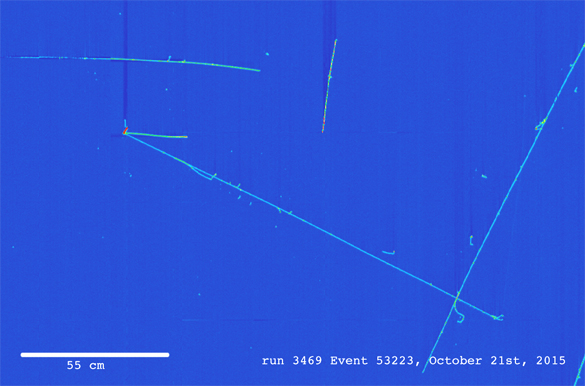 An accelerator-born neutrino candidate, spotted with the MicroBooNE detector. Courtesy/Fermilab

MicroBooNE, a neutrino detector saw its first neutrinos, known as the ghost particles, Oct. 15 in a multi-laboratory experiment at Fermi National Accelerator Laboratory, near Chicago.

“This is a great day for MicroBooNE, and it brings us closer to addressing the question of sterile neutrinos and short-baseline neutrino oscillations,” said Los Alamos National Laboratory staff member Richard Van de Water, a longtime member of the team.

After the Fermilab facility’s proton beam was turned on, scientists analyzed the data recorded by MicroBooNE’s particle detector to find evidence of its first neutrino interactions.

“This was a big team effort,” said Anne Schukraft, a Fermilab postdoc working on MicroBooNE. “More than 100 people have been working very hard to make this happen. It’s exciting to see the first neutrinos.”

MicroBooNE’s detector is a liquid-argon time projection chamber. It resembles a silo lying on its side, but instead of grain, it’s filled with 170 tons of liquid argon. The principal purpose of the detector is to confirm or deny the existence of a hypothetical particle known as the sterile neutrino. To date, three types (or flavors) of neutrinos have been detected. The detection of a fourth type will be a major contribution to modern particle physics.

Liquid argon is 40 percent denser than water, and hence neutrinos are more likely to interact with it. When an accelerator-born neutrino hits the nucleus of an argon atom in the detector, its collision creates a spray of subatomic particle debris. Tracking these particles allows scientists to reveal the type and properties of the neutrino that produced them.

Los Alamos staff members Geoff Mills and Gerald Garvey were responsible for the construction of the Booster Neutrino Beamline beryllium target and, working closely with Fermilab staff, they, together with Richard Van de Water, were heavily involved in the monitoring and debugging of the various elements of the beamline during its ten years of running for MiniBooNE. Former Los Alamos scientists Wesley Ketchum and Zarko Pavlovic (now at Fermilab) have also contributed substantially to the beamline and to the data acquisition system.

The Booster Neutrino Beamline is part of the Accelerator Complex at Fermilab. It is able to produce protons with energies as high as 8 GeV. These protons impinge on the beryllium target and produce a secondary beam of pions that decay into muons and neutrinos. It is these neutrinos that are detected by MicroBooNE.

The 2015 Nobel Prize in physics was awarded for neutrino oscillations, a phenomenon that is of great importance to the field of elementary particle physics. Intense activity is underway worldwide to capture neutrinos and examine their behavior of transforming from one type to another. MicroBooNE is an example of a new liquid-argon detector being developed to further probe this phenomenon while reconstructing the particle tracks emerging from neutrino collisions as finely detailed three-dimensional images. Its findings will be relevant for the forthcoming Short Baseline Neutrino (SBN) program, which will have excellent sensitivity for short-baseline neutrino oscillations, and the Deep Underground Neutrino Experiment (DUNE), which plans to examine neutrino transitions over longer distances and a much broader energy range. Scientists are also using MicroBooNE as an R&D platform for the large DUNE liquid-argon detectors.

What Happened, and When

In August, MicroBooNE saw its first cosmic ray events, recording the tracks of cosmic-ray muons used to calibrate the detector. Thursday’s ghost sighting brings MicroBooNE researchers much closer to one of their scientific goals, determining whether the excess of low-energy events observed in the MiniBooNE experiment was the footprint of a sterile neutrino or a new type of background.

Before they can do that, however, MicroBooNE will have to collect data for several years. The 800 MeV proton Booster Neutrino Beamline produces low-energy neutrinos. These are the lowest energy neutrinos to be observed with a liquid-argon detector yet.

For a complete sterile neutrino picture, it is necessary to measure both electron neutrino appearance and muon neutrino disappearance. MicroBooNE and another Fermilab project called MINOS+ will be the next two experiments to run in the near future that will provide more information on these two crucial measurements. Ketchum and Pavlovic are playing a major role in developing the oscillation analyses.

For more about MicroBooNE and the Los Alamos collaboration: http://www.lanl.gov/science-innovation/science-programs/office-of-science-programs/high-energy-physics/microboone.php