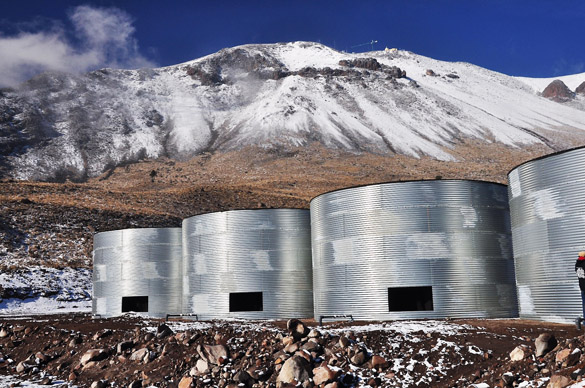 Supernovae, neutron star collisions and active galactic nuclei are among the most energetic phenomena in the known universe. These violent explosions produce high-energy gamma rays and cosmic rays, which can easily travel large distances—making it possible to see objects and events far outside our own galaxy.

Construction is now complete on the newest tool available to study these explosive events and learn more about the nature of high-energy radiation. The High Altitude Water Cherenkov (HAWC) Gamma-Ray Observatory, located 13,500 feet above sea level on the slopes of Mexico’s Volcán Sierra Negra, will soon begin collecting data at full capacity. This milestone was marked with an inaugural event at the observatory March 19-20.

“The HAWC observatory will detect the highest energy photons ever observed,” said Brenda Dingus, the principal investigator of the U.S. Department of Energy funding for HAWC and a research fellow at Los Alamos National Laboratory. “These photons point back to astrophysical sources that accelerate particles to energies millions of times higher than man-made particle accelerators. These photons could also be produced by dark matter, which would tell us about these as yet unknown type of fundamental particles that compose most of the mass of the Universe.”

Dingus is a Fellow of the American Physical Society, and in 2000 was a recipient of the Presidential Early Career Award for Scientists and Engineers.

“HAWC truly is the only observatory of its kind, and will give us a clearer picture than ever before of the high-energy wonders of the universe,” said Jordan Goodman, professor of physics at the University of Maryland. The project is a joint collaboration between the United States and Mexico, and Goodman is the principal investigator of the National Science Foundation’s funding for HAWC.

Each of HAWC’s detectors is a huge tank containing 50,000 gallons of ultrapure water with four light sensors anchored to the floor. When gamma rays or cosmic rays reach Earth’s atmosphere they set off a cascade of charged particles, and when these particles reach the water in HAWC’s detectors, they produce a cone-shaped flash of light known as Cherenkov radiation. The effect is much like a sonic boom produced by a supersonic jet, because the particles are traveling slightly faster than the speed of light in ultrapure water.

The light sensors record each flash of Cherenkov radiation inside the detector tanks. By comparing nanosecond differences in arrival times at each light sensor, scientists can reconstruct the angle of travel for each particle cascade. The intensity of the light indicates the primary particle’s energy, and the pattern of detector hits can distinguish between gamma rays and cosmic rays. With 300 detectors spread over nearly three football fields, HAWC is able to “see” these events in relatively high resolution.

To envision how the detectors work, Goodman suggests imagining your computer keyboard as a detector array, with each key representing one tank. Now, approach the keyboard with an open hand at an angle. This represents the cascade of charged particles. The heel of your hand will strike a few keys first, followed by more keys in a defined order as you flatten your palm across the keyboard.

HAWC has been collecting data since August 2013 when it had only 111 detector tanks. Even then, HAWC was much more capable than its predecessor—an observatory known as Milagro that operated near Los Alamos, N.M. and ceased taking data in 2008. In eight years of operation, Milagro found new sources of high-energy gamma rays, detected diffuse gamma rays from our own Milky Way galaxy and discovered that the cosmic rays hitting earth had an unexpected non-uniformity.

“HAWC will be more than 10 times more sensitive than Milagro was, and it will detect many new astrophysical accelerators.  These accelerators push our understanding of physics because they involve the highest gravitational and electromagnetic fields.” Dingus said.

“Los Alamos also studies these phenomena through complex computer simulations to determine how the physical mechanisms can accelerate particles to such high energies and to compare these predictions with the gamma ray observations,” said Alan Bishop, LANL principal associate director for Science, Technology and Engineering (PADSTE).

In the past year and half, HAWC has gathered high-energy images of objects near and far, including the Crab Nebula, star clusters in the Milky Way and the active galactic nucleus Markarian 421.

From its perch atop the highest accessible peak in Mexico, HAWC will have 15 percent of the sky within its sights at any given time. As the earth rotates, so too will HAWC’s field of vision, meaning that HAWC will see up to two-thirds of the sky every 24 hours. The team’s major science goals include studying active galactic nuclei—the bright outputs of energy associated with the growth of supermassive black holes at the center of some galaxies—as well as tracking gamma ray bursts and other large explosions. The researchers will also work to determine the enigmatic nature of cosmic rays themselves.

The National Science Foundation, the Department of Energy Office of Science and Los Alamos National Laboratory provided funding for the United States’ participation in the HAWC project. The Consejo Nacional de Ciencia y Tecnología (CONACyT) is the primary funder for Mexican participation.