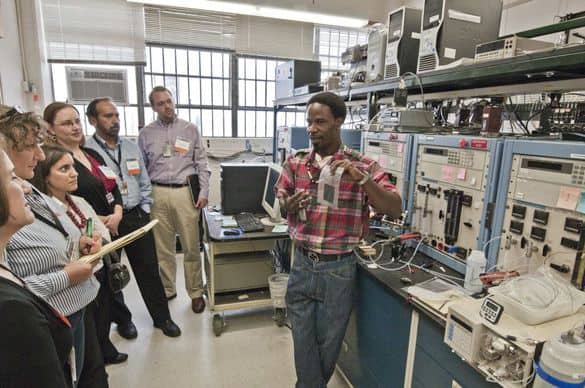 Editor’s note: This is the second part of a two-part report on LANL’s Regional Community Leaders’ Breakfast meeting and tours. Part one can be viewed by clicking HERE.

Energy security for the United States is a rapidly growing mission of the Los Alamos National Laboratory. After the breakfast meeting, a group of community members were given a tour of two areas of the Lab devoted to the energy security mission.

The first stop on the tour was the Fuel Cell Laboratory where research scientist Tommy Rockward described his current research into improving fuel cell efficiency.

But first a little general background on fuel cells, provided by Wikipedia:

A fuel cell is a device that converts the chemical energy from a fuel into electricity through a chemical reaction with oxygen or another oxidizing agent.[1] Hydrogen is the most common fuel, but hydrocarbons such as natural gas and alcohols like methanol are sometimes used. Fuel cells are different from batteries in that they require a constant source of fuel and oxygen to run, but they can produce electricity continually for as long as these inputs are supplied.

Welsh Physicist William Grove developed the first crude fuel cells in 1839. The first commercial use of fuel cells was in NASA space programs to generate power for probes, satellites and space capsules. Since then, fuel cells have been used in many other applications. Fuel cells are used for primary and backup power for commercial, industrial and residential buildings and in remote or inaccessible areas. They are used to power fuel cell vehicles, including automobiles, buses, forklifts, airplanes, boats, motorcycles and submarines.

There are many types of fuel cells, but they all consist of an anode (negative side), a cathode (positive side) and an electrolyte that allows charges to move between the two sides of the fuel cell. Electrons are drawn from the anode to the cathode through an external circuit, producing direct current electricity. As the main difference among fuel cell types is the electrolyte, fuel cells are classified by the type of electrolyte they use. Fuel cells come in a variety of sizes. Individual fuel cells produce very small amounts of electricity, about 0.7 volts, so cells are “stacked”, or placed in series or parallel circuits, to increase the voltage and current output to meet an application’s power generation requirements.[2] In addition to electricity, fuel cells produce water, heat and, depending on the fuel source, very small amounts of nitrogen dioxide and other emissions. The energy efficiency of a fuel cell is generally between 40-60%, or up to 85% efficient if waste heat is captured for use. 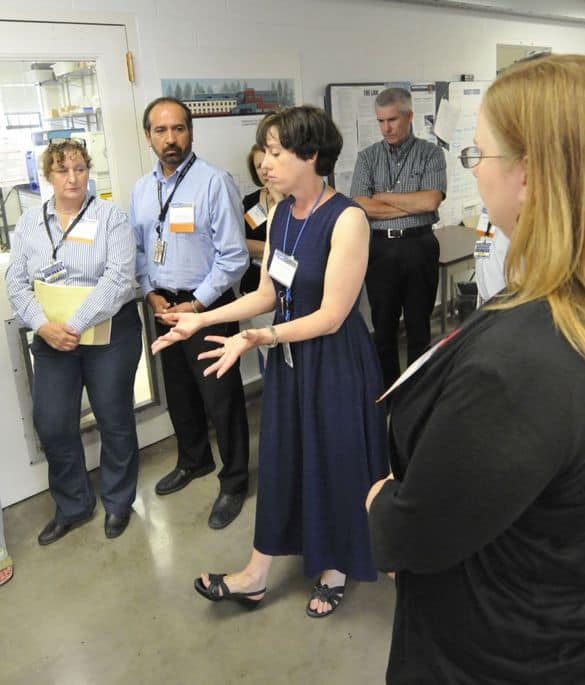 On the way to fuel cell lab, Cathy Padro, Manager of Sensors & Electrochemical Devices said that hydrogen is a fantastic fuel source as there is virtually an unlimited supply all around us (particularly in water) and it has the highest potential energy content of any element. Hydrogen is considered a renewable energy source as it can be converted from water. The output from using hydrogen for power is primarily water and electrons. Padro said that a hydrogen-oxygen mix was used by the main engines of the space shuttle because of hydrogen’s high energy levels.

In the Lab, Rockward described how impurities build up on Polymer Electrolyte Membranes (PEM) of fuel Cells. He used an analogy of a rug getting clogged with dirt and dust. The membrane of a fuel cell becomes “dirty” with impurities. Rockward is looking into methods and materials that can be used to make the conversion of hydrogen into electrons more efficient and longer lasting by reducing the impurities that build up on fuel cell membranes. 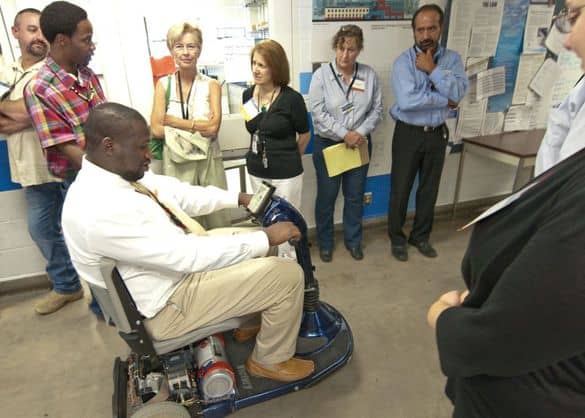 Members of the tour were able to ride a demonstration scooter that the Lab developed about 10 years ago. Padro said that fuel cells weigh less and have a higher range then standard 12 volt batteries. On the downside, the cost of fuel cells is still high. Ten years ago, the fuel cell demonstration scooter cost $100,000 to develop. No estimate was given on how much the scooter would cost today, only that it would be much cheaper, but still more expensive than a commercial scooter using standard batteries. But fuel cell costs are dropping.

The platinum catalyst plates typically used in fuel cells are very expensive. Rockward and others at the Lab are researching the use of cheaper materials as catalysts.

Pedro said that the military has experimented with using fuel cells in U.S. Marine Corps backpacks to powering mobile electronic equipment such as radios and computers. The fuel cell lab has collaborated with the Marines on backpack fuel cell system experiments.

The fuel cell lab is currently partnering with General Motors, as well as other organizations in the advancement of fuel cell technology.

Rockway said that the unique abilities and knowledge of the scientists at the fuel cell lab are used to help others get over particularly difficult stumbling blocks in applied research. Researchers from partnering organizations often come to LANL with a particularly vexing problem and usually someone on the Lab’s staff will come up with a unique and novel solution to help the industry research over the hump, Rockway said.

Next, the group headed over to the nearby Acoustics and Sensory Laboratory to hear about the work being done in partnership with Chevron Corporation.

Russell made it clear that energy security for the U.S. was of utmost importance to Lab researchers and that much progress has already been made.

Russell told the group that in 2005, 60 percent of U.S. consumed oil was imported and that this figure has been reduced to 44 percent.

In the acoustics lab, the community group was shown an acoustic oil/water separation method using ultrasonic waves that can separate two liquid components in a very short amount of time. The research technology is called “Ultrasonic Non-Invasive Particle Detection.”

In the lab, postdoctoral research associate Anirban Chaudhuri demonstrated the prototype “SFAI Multi-phase Meter” by adding a mixture of oil and water to a clear holding tank. The meter can ultrasonically separate the mixture very quickly and measure the quantities of oil and gas flowing through a pipe. (Photos were restricted in this area as proprietary information owned by technology partners was in use.)

The new flow metering prototype reduces the time and the amount of equipment that oil producers must employ to measure the mixture of oil and water coming out of a well. It is estimated that millions of dollars in time and equipment will be saved by U.S. energy companies when the flow meter is commercialized and deployed by energy production service companies.

The new ultrasonic flow meter will be particular useful in determining the royalty payments to landowners who have leased land to drillers in exchange for a cut of the oil production profits. Currently, industry uses large separation vats that take much time to seperate the mixture before the oil and water components can be measured.

Chevron Corporation is a Lab technology partner in the development of the ultrasonic flow meter. The meter will be incredibly useful as there are more than one million wells where it could potentially be deployed.

Next, the community group was shown an acoustic system that determines the condition of underground pipes. An ultrasonic wave generator is attached to one end of an underground pipe and an acoustic sensor is place at the other end. Sound waves traveling through the pipe are analyzed mathematically by computer software. The Lab has development methods of accurately determining pipe condition through the analysis of the sounds waves after they have passed through the pipe. Currently, the distance that can be tested is 100 feet. It is estimated that this technology could save the energy industry $40 million a year in the cost of pipe corrosion detection.

A third project shown to the group was a type of 3D ultrasound imaging system that can be used to help find unknown items and determine their shape deep down in well holes. Items do fall into wells and other objects must be found that must be removed from wells. Visible spectrum cameras are not very good at finding items down in muddy wet well holes. Acoustic sensors are much better at finding objects and determining their shape, so that they may be extracted.

Having the ability to quckly find items down in muddy wells saves much time and expense involved in energy extraction. The LANL developed technology will help solve this major energy discovery and extraction problem. This technology is estimated to potentially save 25 percent in the cost of drilling typical wells.

Another technology where LANL is partnering with the energy industry is with a wireless well hole communication systems that can be placed into well systems to monitor conditions and equipment. Yet another project briefly touched on involves using infrared heat detectors to determine early on if motors deep at well sites are getting too hot, which is a major problem for the energy industry.

Mentioned briefly was “fluidless fracking” research and other new technologies that the Lab is currently researching with industry partners. There is an estimated 100-year natural gas supply available domestically, but industry needs more efficient and cleaner methods to extract it.

To find out more about the team in the Sensors & Electrochemical Devices Group, click HERE.

For more information on Fuel Cells in general, click this Wikipedia LINK.

Do see an example research paper by Rockward and others, click HERE (pdf format.)