New in 2018, the Abiquiú Land Grant – Georgia O’Keeffe Museum Scholarship is specifically designated for descendants of an Abiquiú Land Grant family. Marisa-Ann Lopez of Santa Fe, who is studying culinary arts at Santa Fe Community College, is the inaugural recipient of this award. Applicants from this group may pursue a bachelor’s degree, two-year degree or professional certificate in any field of study at an accredited trade school, college or university.

“This first award of the Abiquiú Land Grant – Georgia O’Keeffe Museum Scholarship represents the beginning of what we hope to be a long partnership between external community organizations and the LANL Foundation to benefit students throughout Northern New Mexico,” said John McDermon, LANL Foundation scholarship program manager. “I am especially proud that, through this partnership, we can assist a deserving scholar who would not have received support without the generous donations from both the Abiquiú Land Grant and Georgia O’Keeffe Museum.”

The second round of Regional College/Returning Student (RCRS) Scholarships in 2018 were given to 16 nontraditional students pursuing a two-year degree or certification after a significant gap in formal education.

These winners, in addition to the 16 recipients of the first round of RCRS awards in January, will be celebrated during a reception Aug. 8 at the LANL Foundation office in Española.

More About These Scholarships 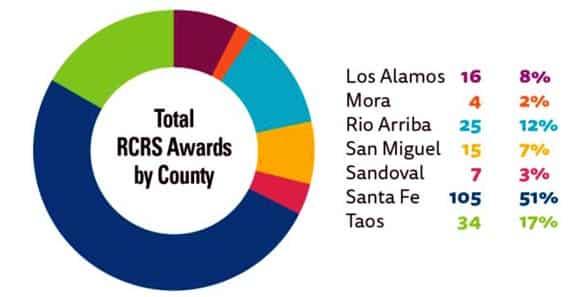 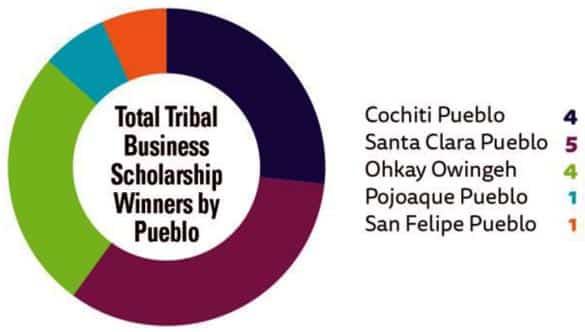 The scholarship program and funds are managed by the LANL Foundation, with oversight, outreach, selections and fundraising support provided by an advisory committee of volunteer donors. RCRS and Tribal Business awards are made possible by the Los Alamos Employees’ Scholarship Fund (LAESF). The primary source of donations to LAESF comes from Los Alamos National Laboratory employees, retirees, contractors, as well as an annual $250,000 contribution from Los Alamos National Security, LLC (LANS) in 2006–2018.  Community members and local businesses may also contribute to the fund, and donations are accepted year-round through the LANL Foundation.

Since 2011, 206 RCRS Scholarships have supported nontraditional students as they seek to improve their lives through education.

Award amounts for both scholarships were raised from $1,000 to $1,500 to better support the needs of these groups.

The new Abiquiú Land Grant – Georgia O’Keeffe Museum Scholarship is privately funded by the Abiquiú Land Grant and Georgia O’Keeffe Museum. The amount and number of awards each year will be determined by funds available and LANL Foundation scholarship section criteria. This award may also be given to eligible students seeking a bachelor’s degree immediately after high school.

“Sometimes a scholarship is the boost of support that a student needs to pursue higher education or start on a new career path,” McDermon said. “We’re proud of all of these winners and know that scholarships change lives.”

Through LAESF and several privately funded scholarships, LANL Foundation has awarded a total of $6.8 million to more than 1,400 students from Los Alamos, Mora, Rio Arriba, San Miguel, Sandoval, Santa Fe and Taos counties since 1999. In 2018, 143 students received a total of $705,200 for these and other four-year degree awards.