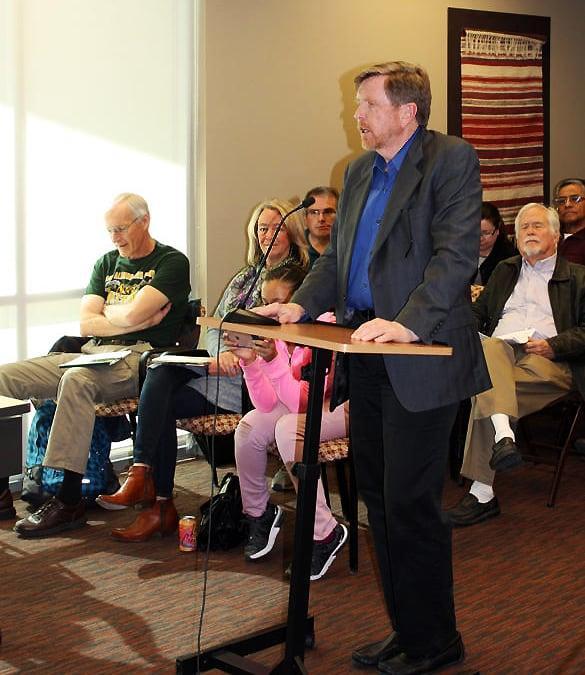 LANL Director Terry Wallace speaks to members of the RCLC board during a meeting Friday in the Municipal Building. County Councilor Pete Sheehey and council candidate Sara Scott listen at left. Photo by Kirsten Laskey/ladailypost.com

Los Alamos National Laboratory Director Terry Wallace presented a briefing about the laboratory to the Regional Coalition of LANL Communities (RCLC) during its meeting Friday in the Los Alamos Municipal Building.

With Triad National Security, LLC set to take the laboratory’s management reigns next month, this briefing will be one of Wallace’s last as director. He touched on the transition from Los Alamos National Security to Triad as well as N3B receiving the contract to do the legacy waste cleanup at the laboratory.

He said that with the increase in hiring at LANL, it is now the largest of any national laboratory site including Sandia. Regarding its budget, Wallace said the budget is expected to rise another $180 million. He added that the budgets at the laboratory and the Environmental Management Los Alamos Field Office are expected to remain “healthy and stable.”

“The coalition provides a public window between us and everyone else,” he said.

In return, RCLC members applauded Wallace for his work.

RCLC Chairman Henry Roybal thanked Wallace for his service. He said LANL has a big responsibility and has a big impact on communities. Treasurer Peter Ives said Wallace has seen LANL through some interesting times and that he was pleased to see businesses coming out of the laboratory and enter into the community such as Descartes Labs.

When asked what he plans to do when he steps away from the director position, Wallace said he plans to stay at the laboratory, but he also has an intelligence project to work on.

In other business, the RCLC unanimously approved sending out bids to hire a state-approved auditor. RCLC Executive Director Eric Vasquez said he inquired with the state auditor’s office to see if the agency needed to issue a request for proposals but was told it could select one from the state auditor’s pre-approved list.

Ives said hiring an auditor was among the state auditor’s recommendations.

“Clearly, we need an auditor…,” he said.

Additionally, the RCLC unanimously approved to delegate Vasquez, Ives and Roybal to pursue opening two separate bank accounts to meet the state auditor’s recommendations. Ives said this would be done in concert with the RCLC’s fiscal agent, Los Alamos County, to make sure the right money is going into the right account.

The RCLC board also approved officer positions. Ives will continue to serve as treasurer, Roybal will continue as chair and RCLC board member Darien Fernandez was elected vice chair. Additionally, the Los Alamos County representative will serve as secretary.