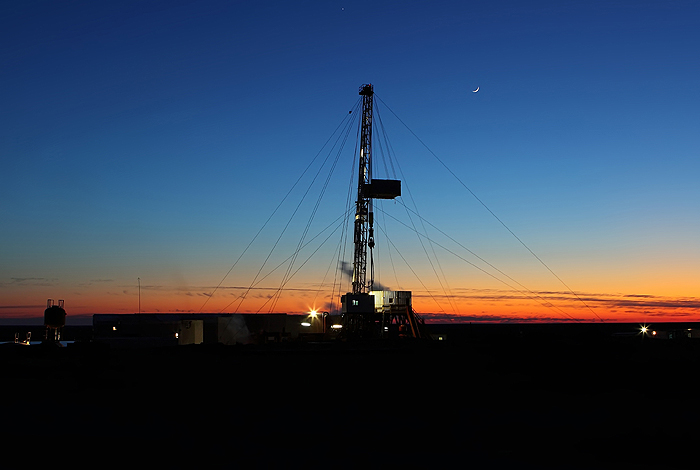 Extensive data mining and analysis of 20,000 shale gas wells has revealed how “refracturing” existing wells with new technology could transform them from diminished producers into high-performers long after their initial peak production period has ended.

“Our analysis could potentially aid in reducing the number of new wells to be drilled,” said Richard Middleton, lead author of the study by a team of Los Alamos National Laboratory scientists. “In addition, through better fracturing techniques and alternative working fluids such as supercritical carbon dioxide, we see ways to both increase shale gas recovery and minimize environmental impacts through carbon sequestration,” he said.

The analysis, reviewing 23 years of production from 20,000 wells, identifies key discoveries, lessons learned and recommendations for greatly improving “tail production,” that is, the long-term production after the initial peak production of a well.

Los Alamos applies its expertise in data analysis and high-performance computing to study oil and gas production as part of its mission to enhance the nation’s energy security.

Shale gas production through hydraulic fracturing is characterized by substantial gas production in the first few months to a year, but the production exponentially declines after only a month or two. Tail production starts about 12 months after this initial exponential decline.

“Hydraulic fracturing research has largely focused on the initial 12-month production, since an operator will break even and make a profit from this ‘exponential’ production. However, in the paper, we try to emphasize the importance and value of this long-term, tail production,” he said.

The data mining analysis revealed that “refracturing” existing wells with new technology can transform them into high-performing wells with the production characteristics of a newly drilled site. The paper in Applied Energy notes that this observation has profound implications in the potential revitalization of the hundreds of thousands of shale gas wells across the United States.

In addition, the longer use of existing wells is cost effective, the authors point out. Restimulating an existing well eliminates the capital cost of a new well, while providing a smaller environmental footprint.

The journal: Applied Energy provides a forum for information on innovation, research, development and demonstration in the areas of energy conversion and conservation, the optimal use of energy resources, analysis and optimization of energy processes, mitigation of environmental pollutants, and sustainable energy systems. The breadth of coverage ranges from innovative technologies and systems of both fossil and renewable energy to the economic industrial and domestic use of energy with no or minor impact on the environment.

The funding: This study was funded by Los Alamos’ Laboratory Directed Research and Development (LDRD) program.