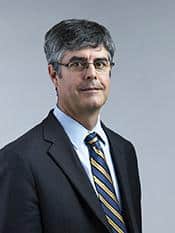 The focus was primarily on the economy at Tuesday’s Los Alamos National Laboratory Community Conversation via Zoom. Laboratory Director Thom Mason opened with an update on the Lab’s response to COVID-19.

“We had to be very adaptable in our response to COVID-19,” Mason said. “The Lab is considered an essential service. Seventy percent of our staff is working remotely.”

The Lab is testing personnel working onsite and other employees with concerns they might be infected, Mason said. Although the Lab is on the same trajectory as the surrounding area, in which cases increased over the past month, Mason said that recently, the Lab has seen “a tapering of growth.”

“The measures we’ve taken really have an impact,” he said.

LANL researchers have been involved in fighting infectious diseases since the 1970s and they are currently researching COVID-19, as well as supplying tracking data for PPT and soon, for vaccine distribution, Mason said.

In addition, LANL employees are helping out local communities with $2.4 million in charitable donations. Triad, which manages the Lab kicked in another $1 million. Two food drives also have been successful, Mason said.

Here are some of the high points:

LANL rolled out a new procurement system called Arriba this year, which makes doing business with the Lab easier and provides faster payments to suppliers, Mason said. The Lab has partnered with local colleges to train students for high-demand jobs at the Lab, he said. Students can train to be a radiation control technician at Northern New Mexico Collage or train to be a machinist at Santa Fe Community College, Mason said.

Current Lab employees can enter the bachelor’s program in mechanical engineering at UNM-Los Alamos and earn a four-year degree.

New Mexico has seen a 7 percent decline in non-farm jobs since February, she said. There has been progress, Keyes said. Job training reimbursement programs have helped 2,380 New Mexicans train for new jobs.

The Department has seen some success in recruiting businesses from around the world to the state, including Sceye, a materials science and airship development firm now located at the Roswell Air Center. Sceye launched an airship in November from the Air Center. Sceye began working in Roswell in 2014 on its concept of designing and building a helium-powered airship capable of traveling 65,000 miles into the stratosphere and staying there for extended periods of time. The idea is that the ships — lifted by helium and powered by solar — will carry audio equipment or cameras that can collect data from the earth or will carry the infrastructure necessary to provide internet or cellphone networks. Broadband funding is a priority for the New Mexico Legislature this year, Keyes said.

The Department is hoping to see increased growth in outdoor recreation, film and television and high tech next year, she said.

“People want to be outside the bigger cities, post COVID,” Keyes said. “New Mexico is very attractive to them.”