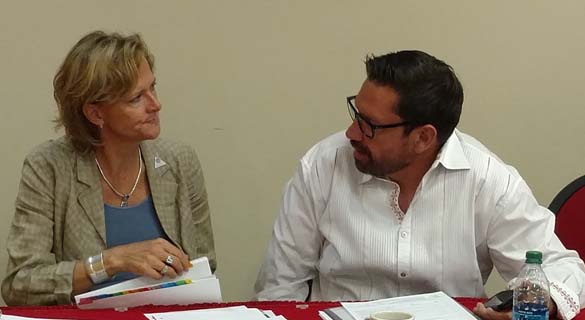 Los Alamos County Councilor Kristin Henderson and Santa Fe Mayor Javier Gonzales at the Regional Coalition of LANL Communities meeting last week in Ohkay Owingeh. Photo by Roger Snodgrass/ladailypost.com
By ROGER SNODGRASS
Los Alamos Daily Post
A delegation from the Regional Coalition of LANL Communities is visiting Washington, D.C. this week to attend a National Cleanup Conference.
In scheduled talks on Capitol Hill and with Department of Energy officials, they will not have the benefit of some missing information that has been blamed for inadequate funding of environmental cleanup efforts at Los Alamos National Laboratory.
The delegation, including Los Alamos County Councilor Kristin Henderson and Santa Fe Mayor Javier Gonzales will be discussing budget issues before Congress returns to the home front for the final leg of the national elections.
The still-missing information is called the Lifecycle Baseline Cost Estimate and it is supposed to be a detailed statement of what needs to be done in each of DOE’s contaminated sites, how much that will cost and how long it will take to do the work.
The last time a comprehensive baseline cost estimate was completed was in 2008, according to Doug Hintze, DOE’s Environmental Management field office manager for Los Alamos. But that schedule soon went out of date because of a series of setbacks that included two frightening wildfires, a thousand year flood and the unexpected discovery of a $200 million hexavalent chromium plume problem that has been seeping contamination into the regional aquifer for 60 years and is threatening the neighboring Pueblo of San Ildefonso.
Because of a perceived emergency, the basic cleanup program changed to expedite the removal of vulnerable nuclear wastes from LANL’s storage area to the permanent repository, the Waste Isolation Pilot Plant in Southern New Mexico. But then WIPP itself has been closed for more than two years due to a radiation leak that may delay resumption of full operations until 2022, Hintze said at a meeting last week at the Ohkay Resort and Hotel in Ohkay Owingeh Pueblo.
The coalition board heard an updated presentation about what that information was about and what it was like. Hintze said it was a complex problem, given the uncertainties of budget and a host of unknown factors, noting that the cost and time goals had to be expressed in terms of a range of numbers because there were so many risks involved between now and completion.
“It’s going to take until 2035,” he said. “That’s with a five year contingency, so it’s 2035 to 2040.” He said the cost range would run $2.9 billion to $3.8 billion.
Responding to the new information, Henderson said, “That was one of the most informative presentations we have had.”
Somewhat more puzzled, Gonzalez asked if the coalition had ever received the full scope documentation of the full cleanup campaigns and the schedule. The answer, Hintze said, was no. The lifecycle cost estimate had to wait until after the recent Consent Order with the state was completed in July, laying out the scope of work.
“Everything’s got to go back to headquarters,” Hintze said, adding that the previous discussions don’t have enough detail. Gonzalez said the process was frustrating and tiring with so little information.
“Even if it was a high level document that gave us an idea of what the baseline was and some of the costs and impacts; it would be a lot better for us because we actually know why we’re asking for money,” he said. “We’re going up (Washington, D.C.) next week and we have no clue as to why it’s needed and what it’s going to do back here.”
The Department of Energy, the Energy Communties Alliance and the Energy Facility Contractors trade organization are sponsoring this week’s National Cleanup Workshop. The Northern New Mexico delegation, along with Henderson and Gonzales, includes Los Alamos County Deputy County Manager Brian Bosshardt and RCLC Executive Director Andrea Romero. The group will be holding peer discussions with counterparts around the country along with budget issues on Capitol Hill, before Congress returns to the home front for the final leg of the national elections. Henderson will be a panel member of a presentation on “Strengthening EM through Partnerships.”
Menu
Los Alamos
77°
Fair
5:49am8:25pm MDT
Feels like: 77°F
Wind: 14mph S
Humidity: 30%
Pressure: 30.25"Hg
UV index: 10
TueWedThu
90/66°F
90/64°F
81/63°F
Weather forecast Los Alamos, New Mexico ▸