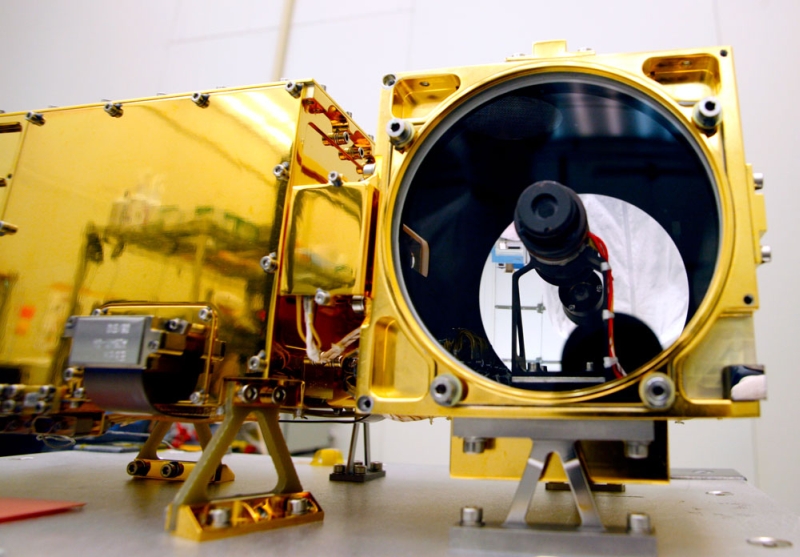 This image shows the ChemCam mast unit mounted on the Curiosity rover as it is being prepared in the clean room prior to the launch of NASA’s Mars Science Laboratory mission. ChemCam fires a powerful laser that can sample Martian rocks and provide critical clues about the Red Planet’s habitability. Courtesy/LANL

Members of the Mars Science Laboratory Curiosity rover ChemCam team will present more than two dozen posters and talks next week during the 44th Lunar and Planetary Science Conference in The Woodlands, Texas.

“ChemCam has performed flawlessly in its first six months, providing more than a gigabyte of exciting new information about the Red Planet,” said Los Alamos National Laboratory planetary scientist Roger Wiens, Principal Investigator of the ChemCam Team. “Since Curiosity’s successful landing on Mars on August 6, 2012, ChemCam has fired more than 40,000 shots at more than a thousand different locations with its high-powered laser. Each of those shots has yielded exciting information about the Martian habitat, and our team has been extremely busy making sense of what we’re seeing in anticipation of presenting it to planetary scientists and the public. The Curiosity mission continues to amaze us with new discoveries, finding Mars to be very Earth-like in many ways.”

The ChemCam team’s work will be showcased during a series of special sessions at the conference on Monday and during a blitz of poster sessions on Tuesday.

The international team of researchers will provide everything from a geological tour of the Martian landscape during the first six months of the SUV-sized rover’s cross-country journey, to investigations of the dusty coating that covers every Martian rock, to a discussion of how scientists used calibration targets mounted on the rover to fine tune differences between spectral readings taken on Earth and on Mars.

ChemCam team member Nina Lanza was selected by conference organizers to chronicle her experiences as a presenter and a conference attendee through microblogging activities all week. Lanza will provide commentary and highlights of each day’s events through her Twitter feed (@marsninja.)

The ChemCam system is one of 10 instruments mounted on the Curiosity rover—a six-wheeled mobile laboratory that will roam more than 12 miles of the planet’s surface during the course of one Martian year (98 Earth weeks). ChemCam can fire an extremely powerful laser pulse up to 23 feet onto an area the size of a pinhead.

The laser vaporizes a tiny portion of the target. A spectrometer then translates the spectral colors of the plasma into the chemical composition of the vaporized material.

The ChemCam team is comprised of researchers from Los Alamos National Laboratory and the French space agency, Centre National d’Etudes Spatiales, as well as other researchers from the U.S., France, Canada, and the United Kingdom. ChemCam operations are now commanded from centers at Los Alamos and Toulouse, France.

The 44th Lunar and Planetary Science Conference runs from March 18-22. The conference webpage is http://www.lpi.usra.edu/meetings/lpsc2013/.