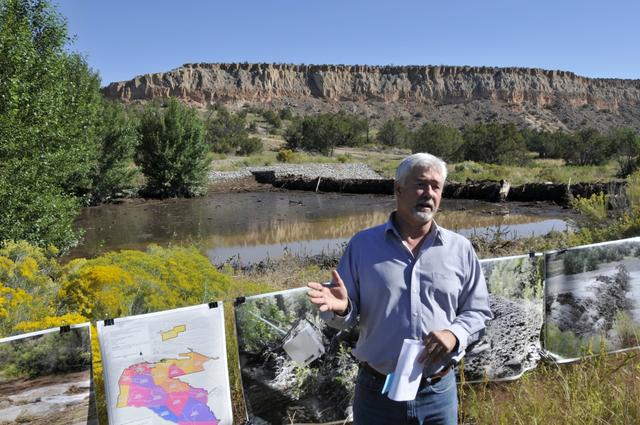 Although most Los Alamos National Laboratory facilities on mesa tops came through last week’s flooding with minimal impact, damage to canyons on and off LANL property has been extensive. During a media briefing Friday, Dave McInroy, director of LANL’s environmental correction actions described the damage and provided photos of some areas hardest hit.

At its peak, the estimated water flow coming from three canyons that cross the Laboratory combined to eclipse the flow rate of the nearby Rio Grande, he said.

McInroy explained that his crews have not had time to visit all of the potentially damaged canyon areas. He and his teams must document damage and submit reports to the New Mexico Environmental Department (NMED.) The flood damage will likely result in delays in remediation and monitoring efforts on-going at the Lab. NMED will review the damage to determine which remediation scheduling delays are justified.

“The first thing we do at the Lab environmental programs when we see something like this happen, and we have never seen this happen before, we have to file what is called a ‘Force Majeure’ with the state environmental department and the EPA,” McInroy said. “What that does is it throws a ‘time out’ so we can assess damage. It kind of postpones all our regulatory deliverables that have been interrupted as a result of this and allows us to go through this assessment period … you negotiate how long of a ‘time out’ is to be granted.”

McInroy said that his teams are also busily fixing key water flow monitoring stations that were washed out or damaged by the flooding waters going down the canyons. He presented his briefing in front of the weir pond near the bottom of Pajarito Canyon (adjacent to the car pool parking area between the truck round and the Y highway interchange.) If not for the strength and stability of the weir dam, much damage to the Y interchange may have been possible from rapidly flowing waters filled with debris, McInroy said. The weir pond dam did not wash out. Rushing waters and debris were contained in the pond before they were able to push on to the Y interchange.

There is heavy road damage to the recently completed Los Alamos Reservoir and to the Guaje Canyon area, he said.

“We jointly share roads. Access is a shared luxury around the county,” McInroy said. “The county has a responsibility to go back and repair, and this is everybody’s hardship, no matter who is ultimately responsible for the fixes.”

Department of Public Utilities Deputy Manager James Alarid has said that four wells in Guaje Canyon are off-line and there is a water pipe break in Guaje Canyon. Extra water is being pumped from other county wells in order to make up any deficiency. Water usage in Los Alamos drops off this time of year making any loss of water wells easier to deal with, he said.

Plans are being developed to restore service from the Guaje Canyon wells. There is a significant amount of repair work to be done in the canyon. Early estimates report that the costs could be $2.4 million to dredge out the reservoir again (it’s filled with debris) and just as much or more to repair heavy damage to Guaje Canyon roads, water pipes and well structures. Rendija Canyon also sustained damage.

Lab environmental programs crews have a lot of wells and sensors to check out and repair if damaged. McInroy said “sentinel” wells sited around Los Alamos County drinking water wells have not reported any approaching contamination near any of the county water wells. McInroy also indicated that county drink wells on LANL property are safe for use.

Mortandad Canyon suffered heavy flooding. Wells that are part of the remediation system for a chromium plume in the area were not damaged, even as the canyon floor filled with water, McInroy said. More inspections of these wells are planned and results of these inspections will be transmitted to NMED. If damage to these wells is discovered, there may be delays in the remediation work plans for the area.

McInroy anticipates that LANL is unlikely to receive federal emergency funding as a result of damage from the floods. He said there are funds available from previous fire related accounts that may provide some of the funding to repair flood damaged areas and monitoring equipment.

Deputy County Administrator Steve Lynne was more optimistic about receiving disaster repair funding for the county. Lynne said county personnel met with a FEMA representative early Friday morning. FEMA is doing an initial assessment and evaluation of damage to the county and will report their findings back to the federal level.  Any funding for flood damage will be distributed at the state level as many counties in New Mexico have been heavily damaged by ain and flooding. 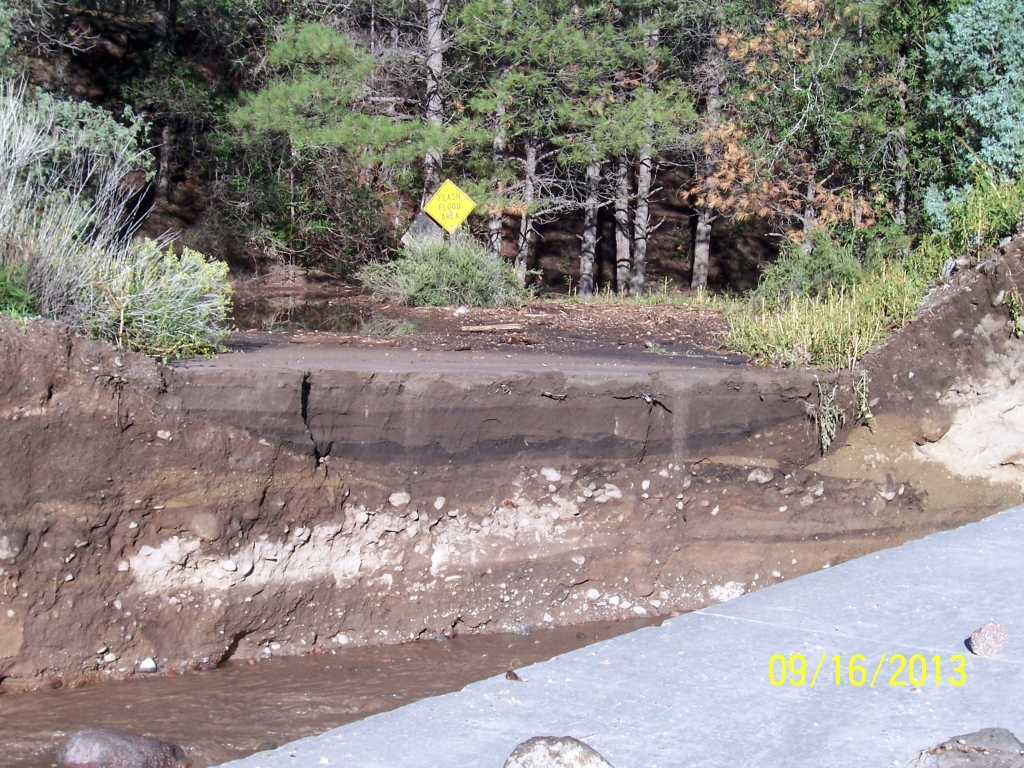 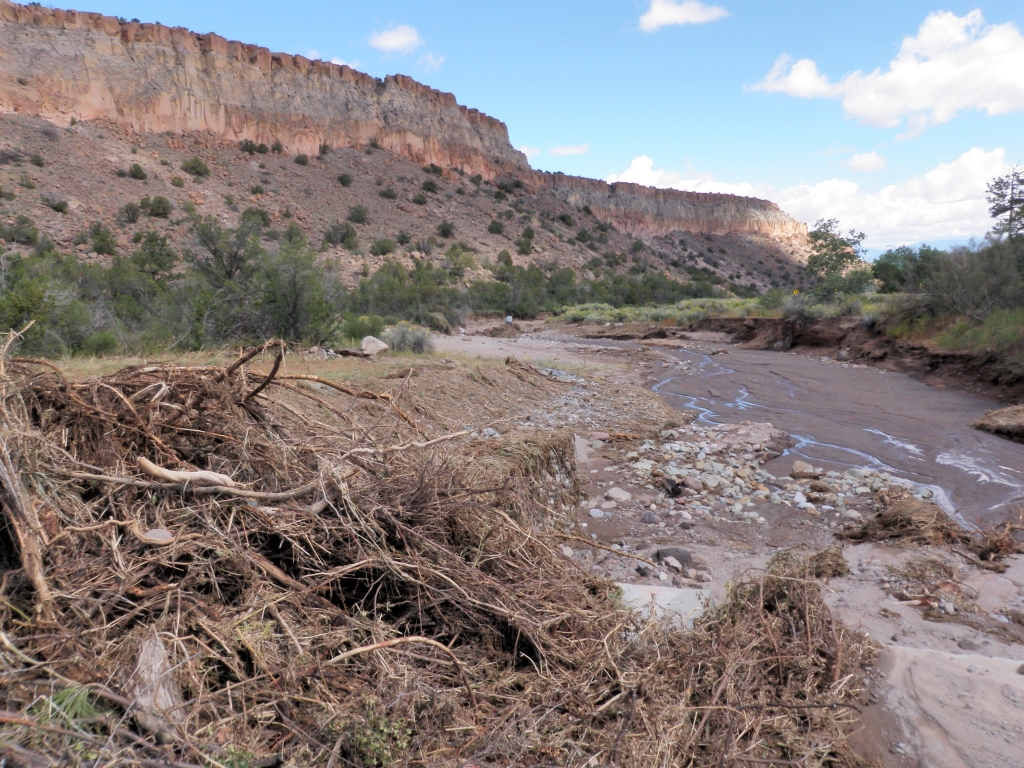 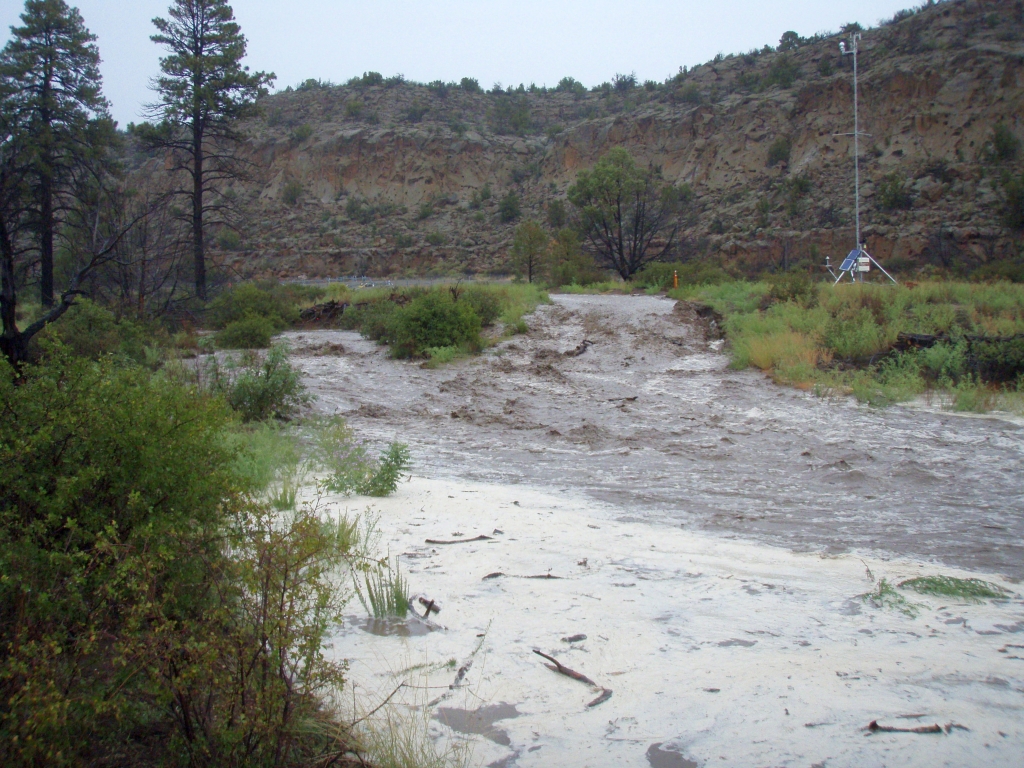 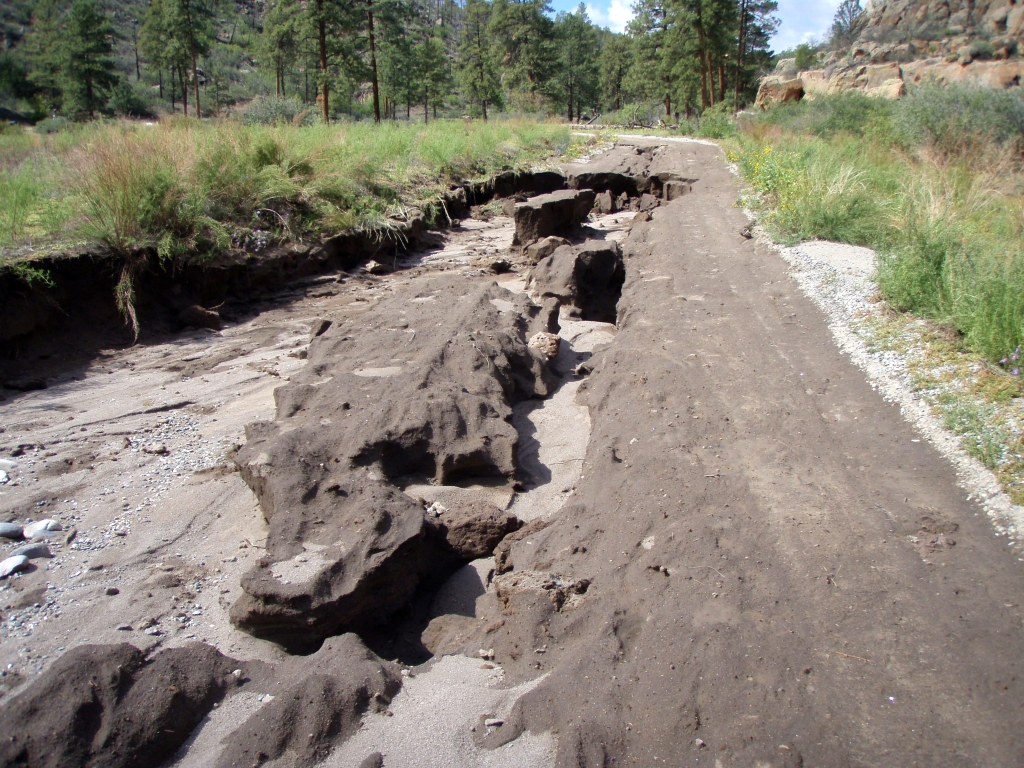 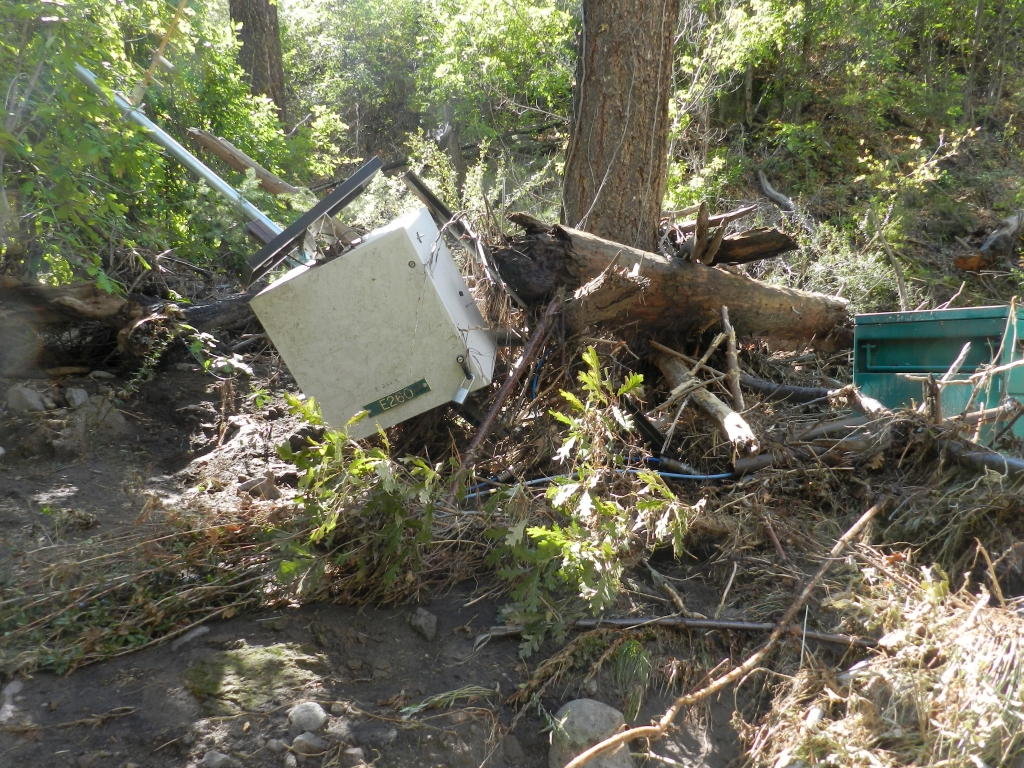 Gage Station E260 is representative of some of the severe canyon damage. Courtesy/LANL 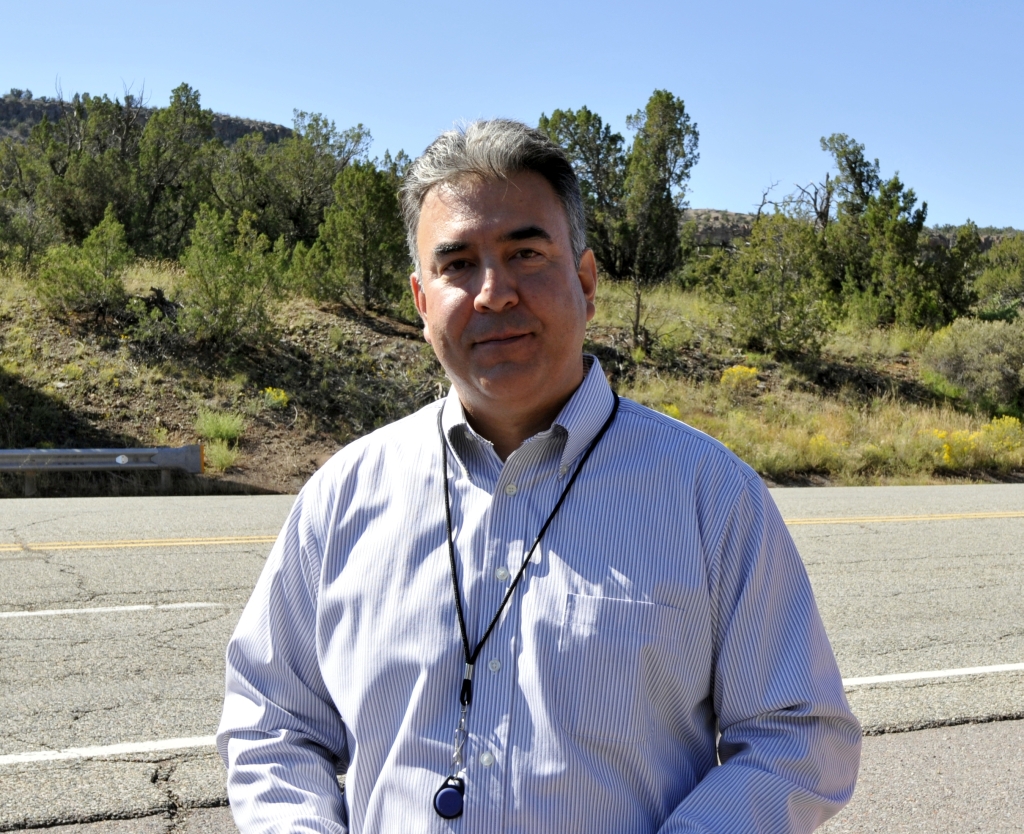