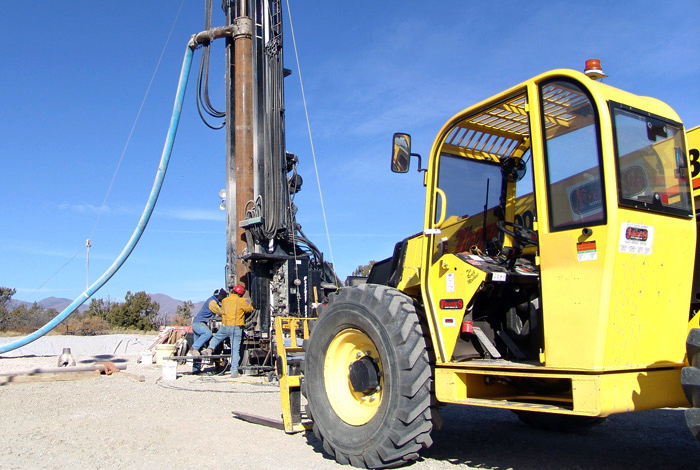 The purpose of the pumping tests is to refine understanding of the plume properties within the regional aquifer and evaluate the potential for large-scale pumping to remove chromium. Chromium concentrations in the plume exceed state and federal standards for groundwater.

“These pumping tests are a key step in identifying measures to address the plume,” said Pete Maggiore, assistant manager for environmental projects at the Department of Energy’s Los Alamos Field Office. “Data from this testing will be used to recommend a final remedy which we will then submit to the state.”

The chromium investigation is part of environmental work being conducted under the 2005 Consent Order between New Mexico, the Lab and the Department of Energy. Under the Consent Order process, the state will select a final remedy after input from the public.

The chromium originated from cooling towers at a Laboratory power plant and was released from 1956 to 1972. At that time, chromium was commonly used in industry as a corrosion inhibitor. Water containing chromium was flushed out of the cooling towers into Sandia Canyon and over time infiltrated into the regional aquifer beneath Mortandad Canyon. The Laboratory estimates that approximately 160,000 pounds of chromium were discharged into the environment in this manner.

The Laboratory discovered the plume in late 2005 and has investigated the nature and extent of the plume since then. A network of 20 monitoring wells at various depths is used to define and monitor the chromium. The wells are part of a larger effort to address chromium, which includes stabilization of a wetland near the location where the chromium was released into Sandia Canyon. Stabilization of the wetland helps ensure that immobile chromium present in wetland sediments remains in place and in its non-toxic form.

The federal standard for total chromium in groundwater is 100 parts per billion (ppb) and the New Mexico standard is 50 ppb. The Laboratory has detected and reported levels of less than 50 ppb at the plume boundaries to approximately 1,000 ppb in the center.

Water supply wells outside the plume all have “sentinel” monitoring wells nearby to detect early arrival of the contaminant plume. The sentinel wells show chromium concentrations are well below standards.

“Moving forward with a remedy that will ensure protection of the public and groundwater is one of our highest environmental priorities,” said Jeff Mousseau, associate director for environmental programs at the Laboratory. “We’ve committed this to the state and it’s the right thing to do.”

The reports, investigations and data on the chromium plume are publicly available at www.intellusnmdata.com and the Lab’s electronic reading room.

Chromium occurs naturally in the environment in two forms, trivalent, Cr(III), and hexavalent, Cr(VI). The Environmental Protection Agency identifies hexavalent chromium in groundwater as having potential adverse health effects when ingested at concentrations elevated above naturally occurring levels. Chromium in the groundwater plume at LANL is hexavalent chromium. See the EPA Web site for additional information.