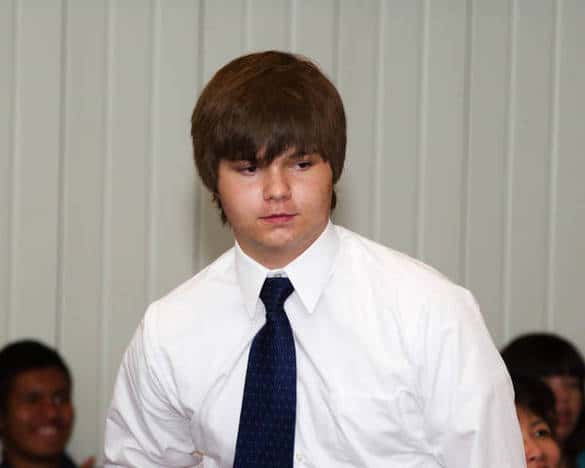 Kendrick received a check for $500. He also received the $100 Crowd Favorite Award chosen by teachers and students and the Best Presentation Award.

Kendrick took the top prize in last year’s Supercomputing Challenge for his computer program to model the rotation of a galaxy including dark matter.

Jordan Medlock of Albuquerque’s Manzano High School took the top prize in the 22nd New Mexico Supercomputing Challenge for his computer algorithm that automates the process of counting and analyzing plaques in magnetic resonance images of persons diagnosed with Alzheimer’s disease. The program vastly speeds up the process of identifying the very small and difficult to see plaques.

For his project, “Detection of Alzheimer’s Disease Plaques in a Transgenic Mouse Brain Using Image Analysis of SPION-Enhanced Magnetic Resonance Images,” Medlock received a check for $1,000.

Seven other teams were finalists in the yearlong competition culminating in Tuesday’s awards ceremony in Los Alamos.

These finalist teams received plaques and banners for their school; team members also each received $50.

The Supercomputing Challenge is open to any New Mexico high-school, middle-school, or elementary-school student.

More than 200 students representing about 60 teams from schools around the state spent the school year researching scientific problems, developing sophisticated computer programs, and learning about computer science with mentors from the state’s national laboratories and other organizations.

The goal of the yearlong event is to teach student teams how to use powerful computers to analyze, model, and solve real-world problems.

Some of the other winners are: