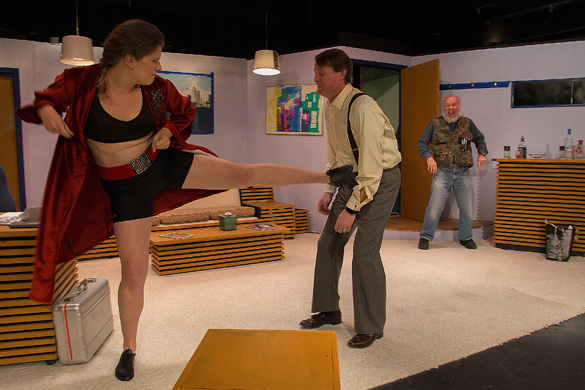 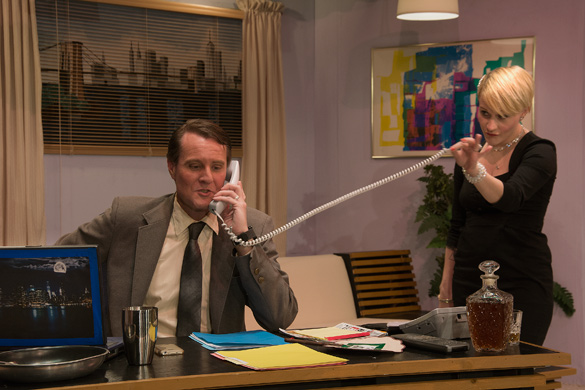 Los Alamos Little Theatre opened “Once A Ponzi Time,” Friday to loud foot-stomping laughter from the audience. My family sometimes describes me as “sense of humor deprived” and I was laughing out loud for most of the play.

This is only the second production of “Once A Ponzi Time” and author Joe Foust certainly deserves to have it produced often in the future.

The play stars Michael Adkins as Harold, a well-meaning investment advisor who has gotten (far) over his head and now owes his investors huge amounts of money. Harold seems to have gotten into this situation through his own desire to help people manage their money. It’s a bit like “It’s A Wonderful Life” gone completely zany. The play starts slow, but it moves higher and higher on the hilarity scale as it gallops to last scene.

Soon Harold is up to his neck in alligators, juggling a SEC agent on his tale (Linda Taylor), his clients (Justin Smith and Katrina Koehler), his loopy father (Rich Hassman), a multi-millionaire potential investor (Dennis Powell) and his Russian trophy wife Natasha (Holly Robinson), his in-the dark wife (Joy Reynolds), and even the Russian mob. Harold is not so ably assisted by his sap of a nephew, Louie (Stuart Rupprecht). Louie holds the purse strings, but his major interest seems to be pandas.

This play reminded me of nothing so much as a Marx Brothers comedy. It’s all here — the puns, the sight gags, the hijinks, and the wild out of control action, as the production runs headlong to the finish line.

Director Jim Sicilian does a wonderful job of managing all this chaos. Everyone is where they should be, probably doing or saying something silly.

Adkins and Rupprecht spend a lot of time on the stage together, and their onstage rapport builds as the play goes on. Adkins has just the right amount of fondness and exasperation with his hapless nephew, who alternates in emotional age between 4 and 12 most of the time. Rupprecht does well in this role – that of fall guy.

Hassman is a real standout as the wily, eccentric Gramps, a very amateur ventriloquist. Gramps sloughs off his dopiness when the SEC agent falls for him. Taylor is a great foil for Gramps as the SEC agent.

This brings up one problem I had with the play. The SEC agent and prize fighter Mary O’Donnell (Katrina Koehler) are saddled with heavy accents (British and Irish respectively). Why a SEC agent would be British is beyond me, and it makes her seem more twittery and less hard-as-nails than the character seems to demand. Even worse, I literally could not understand a word Koehler said under the brogue. Koehler’s all-out physical domination of the stage is not to be missed, however.

Another actor who physically dominates his scenes is Pete Sanford as Russian mobster Sergey. He manages to be suitably menacing while doing really silly things.

Holly Robinson, as trophy wife Natasha, manages her role (and her accent) with aplomb. Like her namesake from “Rocky and Bullwinkle,” Natasha is a Russian femme fatale with a dangerous side. Robinson is utterly believable as the always-in-control Natasha.

Dennis Powell is a treasure as Natasha’s thoroughly dislikable and very rich husband. Slight spoiler: Powell, in this role, bears a strong resemblance to a certain Presidential candidate, especially around the hair. My favorite gag in the play involves this feature.

I can virtually promise you at least a couple laugh-out-loud moments, no matter your comic taste, and you’ll probably have dozens. Warm up your winter with this delightful farce.

The upcoming performances are 7:30 p.m. Friday and Saturday Jan. 23, 29 and 30 and 2 p.m. Jan. 24 at the Performing Arts Center, 1670 Nectar St. Tickets are available at CB FOX, BrownPaperTickets.com or at the door half an hour before curtain time. For more information, visit lalt.org.