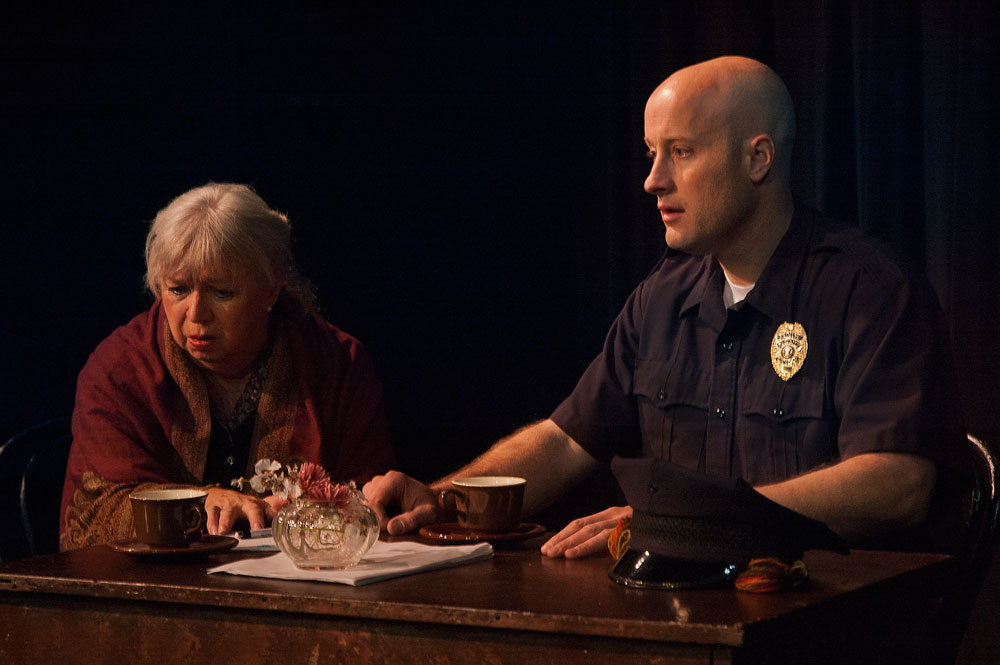 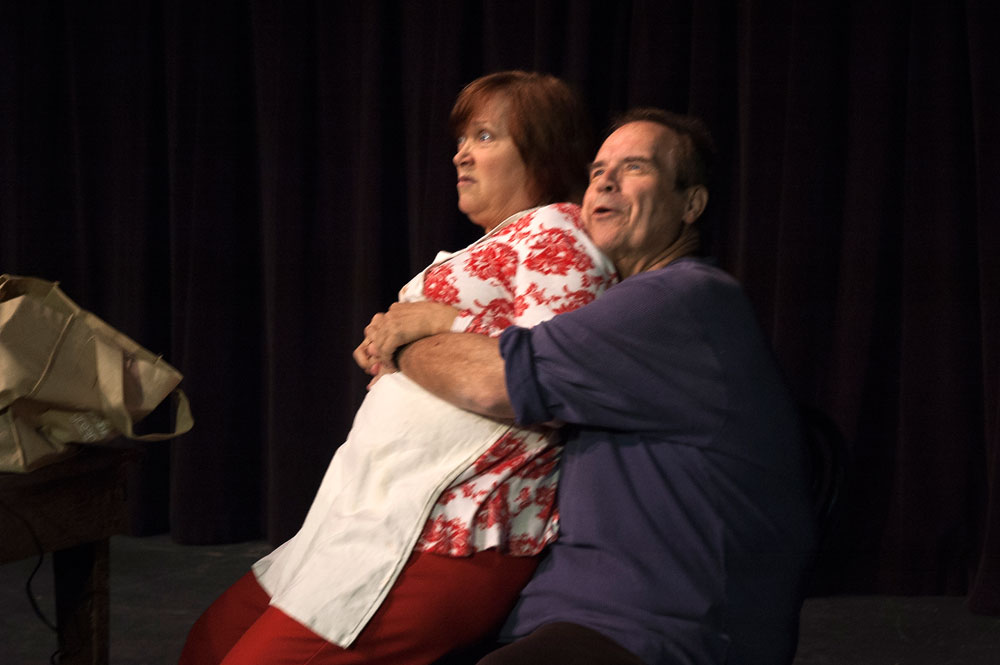 One act plays are a lot like speed dating, the subject of the first of the eight one acts in 8×10: The Fourth Dimension. With only 10 minutes to make an impression, the playwright has to pack a lot of punch into a brief period. The actors have to engage you at once. It makes for an interesting and intense night at the theatre.

The eight dramas on stage opening night at the Los Alamos Little Theatre ran the gamut from touching to hilarious, and in the case of three of the plays, both at once.

Six of the playwrights are from Los Alamos. Dale Dunn, who wrote “A Woman With A Gun,” is from Santa Fe and the script for The Philadelphia, written by David Ives, was purchased.

The evening opened with Robert Benjamin’s “Love Rules,” directed by Dennis Powell. Benjamin’s characters are often over 50, which thrills those of us who fit the bill. After being portrayed as ridiculous stereotypes for way too long, it’s refreshing to see real people – vulnerable, funny, intense – who just happen to be over 50. The speed daters Arthur (Eric Björklund) and Ruby (Pat Beck) display all these qualities at the hectic pace of a speed date – or a one-act. These two veteran actors are a joy to watch.

I have to pause here to talk about Eric Björklund, who not only co-produced “8×10” with John Gustafson, but acts in three of the plays. He is just splendid in all three. Whether he’s playing a shy but eager speed dater, a snarky waiter or a slightly goofy, endearing mayfly, he’s winning our hearts in every scene.

Jody Shepard in “Shadows” by John Gustafson is another standout. As Frances, the lonely widow who reaches out to an equally lonely cop (Brent Nye), she pulls together a complete character in a few minutes and gets some laughs along the way. Shepard’s perfect comic timing is always a joy to watch.

Gustafson is a first-time playwright, as is Fred Berl, who wrote “Putting the Fun in Funeral” and “Kubler-Ross Comes to Dinner.” I hope they don’t put down their pens. Both LALT veterans, their behind-the-scenes experience has served them well.

One-acts can be over-the-top in ways that would never fly in a full-length drama. Berl takes full advantage of this in both his plays. The non-stop jokes and broadly drawn characters had the audience in stiches for 10 minutes each time.

“The Philadelphia” plays off stereotypes about various locales and how they correspond to moods. It’s a clever twist.

The mood is serious in “Woman with a Gun” and “The Phoenix and the Dove.” Both feature some fine performances. In the former, Marcie Long gives a one-woman show that puts us on the edge of our seats. The direction by James Ivanovich is deft. 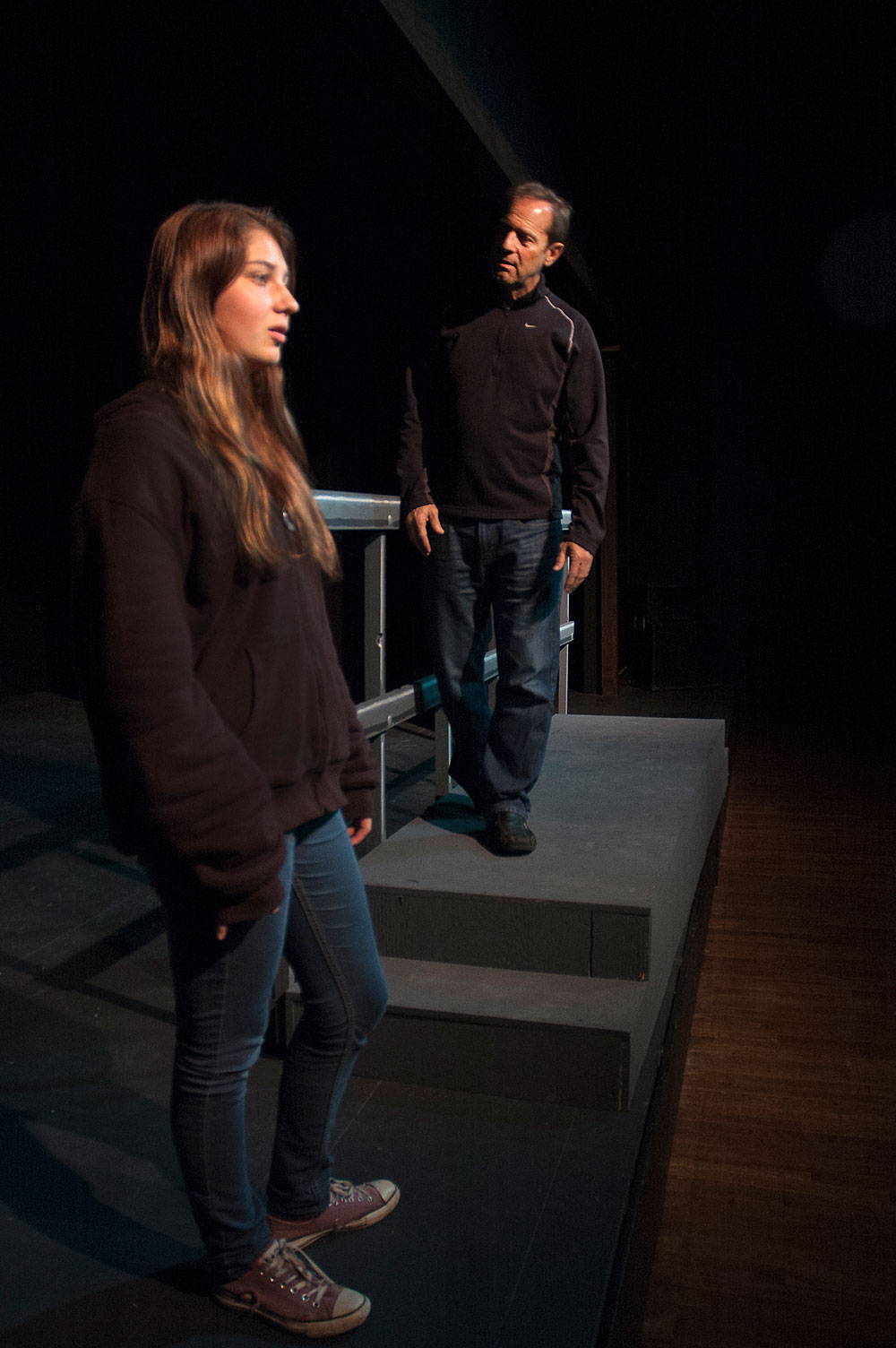 Jamie (Katyln Skeen) and Jonas (Richard Parker) on the bridge in ‘The Phoenix and the Dove.’ Photo by Larry Gibbons

“The Phoenix and the Dove” by Maryanne Mimi Adams features more fine acting by Katlyn Skeen as the depressed teenager Jamie and Richard Parker as Jonas Dove, her flawed but caring mentor. The final moments of Adams’ play are pretty near perfect.

Then there’s “Shimmer.” This play, about a day (the only day) in the life of a couple of mayflies completely won my heart. Tess Light’s drama is a delight from start to finish. Björklund is back on stage as the delightful husband to Dana Kline’s charming lady mayfly. Kyle Uhlenbrock injects laughs at every turn as a third mayfly, seeking he’s not quite sure what.

“Shimmer” takes full advantage of the one-act medium. In 10 minutes, we know and care about the characters, have plenty of chuckles, and learn a little something about life and death. Not bad for a 10-minute drama about insects. An idea that could never be sustained in a full-length play just shines and sparkles and, well “shimmers” in this one act. What a marvelous end to a really enjoyable evening at Los Alamos Little Theater.