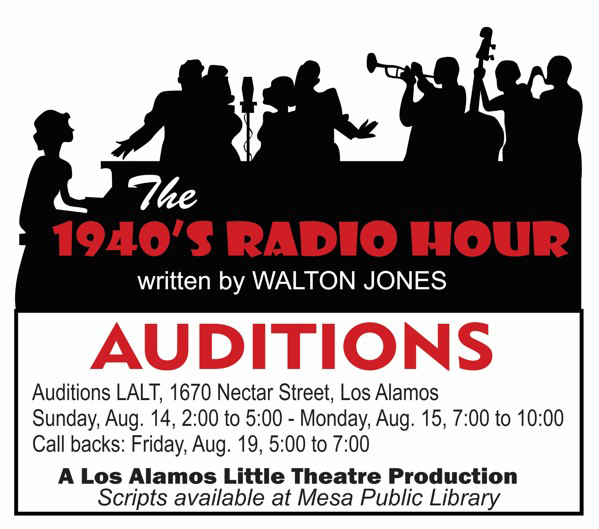 LALT News:
The Los Alamos Little Theater is holding auditions for its November production, The 1940’s Radio Hour, a musical by Walton Jones.
Auditions are at the Performing Arts Center 2-5 p.m. Sunday Aug. 14 and 7-10 p.m. Monday, Aug. 15. Call backs are 5-7 p.m. Friday, Aug. 19. The production is directed by Laurie Tomlinson and the musical director is Gretcehn Amstutz.
All but a couple of male roles require strong singing ability. Actors are strongly encouraged to sing something from the 1940’s Big Band era and will be asked to read scenes from the show at the auditions. An accompanist will be provided. Those auditioning are reminded to bring their sheet music. Scripts are available for check out at Mesa Public Library.
The show will be performed during the first three weekends in November. For more information, contact Laurie Tomlinson at 505.690.7267 or Gretchen Amstutz at 505.470.2254.
About the Show
A different time is evoked in this marvelously theatrical and winning show, a live broadcast of a The Mutual Manhattan Variety Cavalcade from the Hotel Astor’s Algonquin Room on Dec. 21, 1942. The spirit of that bygone era when the world was at war and pop music meant “Strike Up the Band” and “Boogie Woogie Bugle Boy” (both are in this show) is accurately captured as the harassed producer copes with a drunk lead singer, the delivery boy who wants a chance in front of the mike, the second banana who dreams of singing a ballad, and the trumpet playing sound effects man who chooses a fighter plane over Glenn Miller.
Cast of Characters
Clifton Feddington: The announcer and general manager (head of everything at WOV Radio Station). He has ulcers from it all and is sometimes hysterical.
Ann Collier: The ‘old standard’ in the Radio show since its start in 1936. She sings like Dinah Shore, Doris Day, and Peggy Lee (all rolled into one). She is a secretary by day, and at looker by night who is dating Johnny.
Johnny Cantone: Featured vocalist with the Cavalcade who is on Sinatra’s bandwagon. He’s an ex-boxer and a rough guy who drinks too much and has a voice like velvet.
Ginger Brooks: A bubble-headed waitress-turned-singer. She has a pinup, Betty Grable look with lots of makeup and speaks with a Gracie Allen vacancy.
Geneva Lee Browne: The southern Belle of WOV got her start in music at age 17 performing in local Swing ballrooms around the Atlanta area. Scripted as a beautiful, high class, African-American singer.
Neal Tilden: Cab driver by day and singer, dancer, and choreographer at night. He is hopeful for the ‘featured vocalist’ slot.
B.J. Gibson: The third of the Gibson brothers to work for the Cavalcade. He is squeaky-clean, good looking, and a preppy student at Yale.
Connie Miller: A 17-year-old bobbysoxer from Ogden, Utah. She is perennially in love and runs an elevator by day.
Pops Bailey: A crotchety, wizened stage doorkeeper who is a racing bookie on the company phone and reads hidden copies of Show Girl magazine.
Lou Cohn: A big shot (at least in his own mind) who tries to impress the girls and is sometimes obnoxious. He runs the show and is the sound effects man.
Wally Ferguson: Young hopeful from Altoona, Pennsylvania who came to NYC to work for his uncle at the drugstore to get his big show-biz break.
Biff Baker: A young trumpet player with the Zoot Doubleman orchestra who will be leaving after the concert for Army duty.
Stanley: Lugs cable and runs around a lot and otherwise lives in the control booth.
Zoot Doubleman: WOV Orchestra Leader
Menu
Los Alamos
88°
Mostly Cloudy
5:48am8:24pm MDT
Feels like: 88°F
Wind: 5mph SE
Humidity: 13%
Pressure: 30.21"Hg
UV index: 1