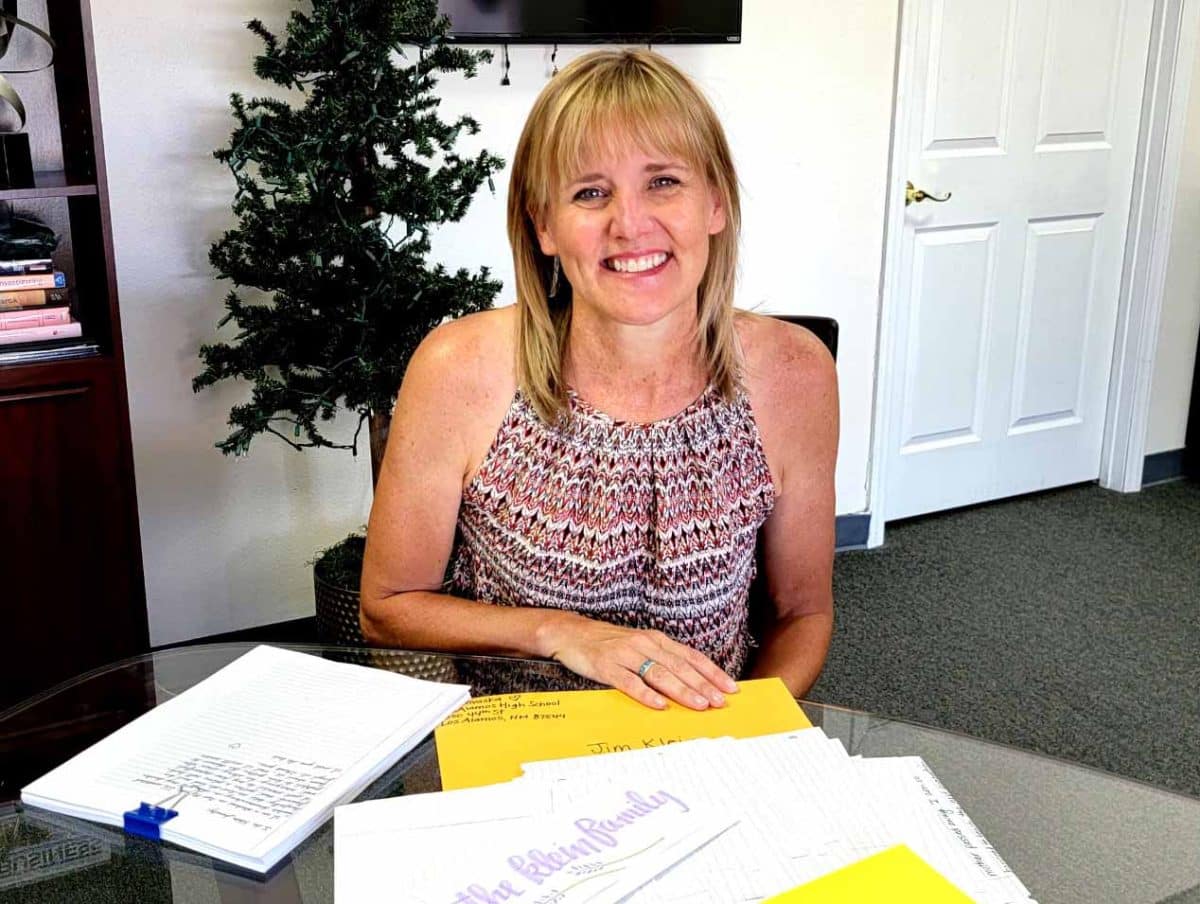 LAHS teacher Lynn Ovaska during an interview June 9 at the Post. Photo by Carol A. Clark/ladailypost.com

Los Alamos High School teacher Lynn Ovaska was deeply touched by Holocaust Survivor Gerda Weissmann Klein and the inspirational story told in her autobiographical account of the Holocaust, “All But My Life”.

“I first learned about Gerda from my high school teacher Jan Heyerdahl 30 plus years ago,” Ovaska said during a recent interview at the Los Alamos Daily Post. “I went with Ms. Heyerdahl to Europe in the late 1980s, and we visited Dachau concentration camp … never thinking that someday I would be taking students of my own to Europe. After college, when I was a teacher, I watched Gerda’s film and admired her so much.”

While her parents were transported to Auschwitz, Gerda was sent to the Gross-Rosen camp system, where for the remainder of the war she performed forced labor in textile factories. Gerda was liberated after a death march, wearing the ski boots her father insisted would help her to survive.

Her autobiography was made into a documentary, “One Survivor Remembers,” that Ovaska shows in her history class. This year, Ovaska showed it the day before Spring Break and the end of the film mentioned that Weissmann Klein and her husband Kurt had retired to Scottsdale, Ariz. Ovaska happened to be headed to Arizona and in Scottsdale March 29 visiting her daughter who is attending Arizona State University, just 15 minutes from where Weissmann Klein was living.

“I’m a real believer in simple acts of kindness, so I decided to stop at the store and buy a flowering plant and card to thank Gerda and let her know as a teacher how much she has meant to me and my students,” Ovaska said. “I thought she took her tragedy and lived a simple and beautiful life. I wanted to thank her for sharing her story and let her know I, as a teacher, would continue to tell it.”

Ovaska had no idea when she left the plant and card for Weissmann Klein that her simple act of kindness would spark a series of inspirational events … not only for her and her family but for more than 100 of her students at Los Alamos High School. 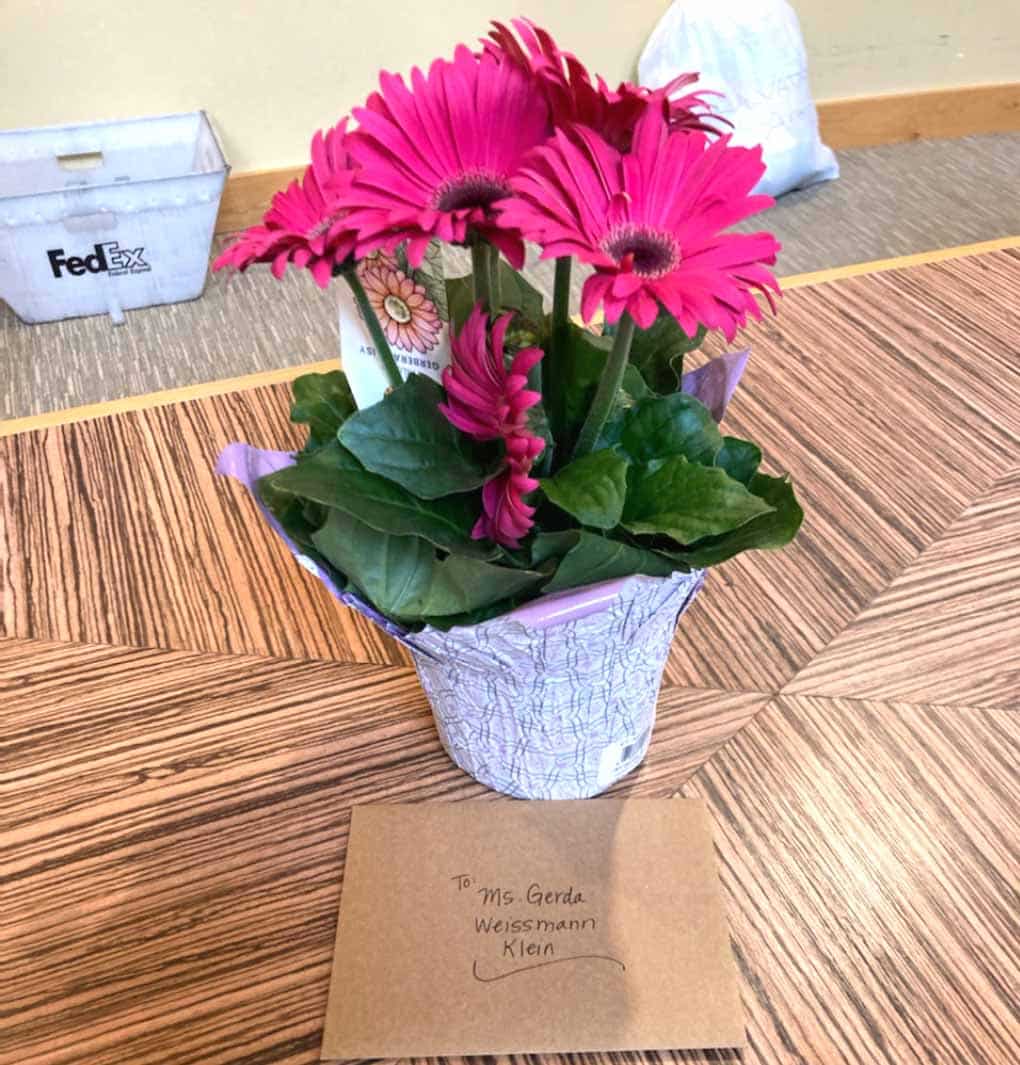 “Gerda Weissman Klein’s Holocaust survivor testimony and history did not go unnoticed by LAPS educator, Lynn Ovaska,” Delfin said. “As the consummate teacher, she made Gerda Klein’s mark on world history relevant with her students by making a personal connection with the family.

Together with her students, Ms. Ovaska respectfully created a fellowship bond that honored Gerda Klein’s message of hope and courage. I want to publicly thank Ms. Ovaska and her students for taking the bold move to make educational experiences an enriching and inspiring way to promote human resiliency. A life lesson that we all need in these uncertain times.”

After Spring Break, Ovaska was teaching class April 4 when she received a phone call from Arizona. Ovaska listened to the voice message that evening when she got home and realized it was from Gerda’s granddaughter Lexi.

Lexi thanked her for the gift and card and then told Ovaska that her grandmother passed away April 3 – just four days after Ovaska left her gift. Ovaska said she was overwhelmed.

“Lexi told me her grandmother was so pleased to receive my gift because she especially loved teachers and said teaching is the most important profession,” Ovaska said. “Lexi said that Gerda passed away with the flowering plant and card on her night table. I was so sorry that Gerda had passed and was in awe that our simple flowers made such an impact that the Klein family would call me as they were mourning the loss of Gerda.”

Ovaska said that their phone call back to her was such a gift.

“Teachers need to know what we do in the classroom matters,” Ovaska said. “The best part of being a teacher is the relationships and the learning and the moments in your classroom. I cannot believe Gerda’s family took time to call … I said to my students there are times in your life when you’re both big and small but it’s so powerful, this is one of those moments. When I let my Euro students know I heard back from the family and that Gerda had passed, there wasn’t a dry eye in the classroom.” 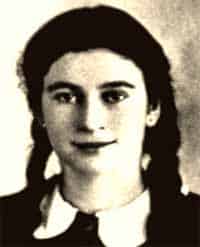 “We have to create spaces to talk about hard things and think of ways to do better and I think the kids got it that day,” she said. “The veil between heaven and earth has felt so thin around this but I am honored to be connected … it all came down to a simple act of kindness.”

Gerda’s son said his mother said to her future husband, American soldier Kurt Klein, when he walked up to free her … “Noble be man – helpful and good”.

Ovaska said it was amazing she could say that after all those years of torture and seeing her friends dying.

“I believe in community, and I ask students to lean into community and do good work,” Ovaska said. “My job is to help them find what is noble and good. Schools are not for politics but to provide a safe place to learn to be good and noble.”

Ovaska began teaching social studies in 1999 at LAHS. In addition to AP European History, she teaches AP Psychology and Psychology classes and Student Leadership. She sponsors Student Council and Natural Helpers, and is a National Board Certified Teacher. She began conducting European study tours with newly graduated students in 2012.

“The Holocaust to me is one of the most essential topics taught in any class … that’s why Gerda Klein’s documentary is so important,” Ovaska said. “She was a teenage girl and high school students can relate. Her story is eye-opening. She was just 15 so she was sent to slave labor camps where she survived horrific conditions for six years. When liberated in 1945, she was one of 4,000 women sent on a forced death march through Poland, Germany and what is now the Czech Republic. She lost her parents and her brother during the Holocaust. After Weissmann married Klein, she emigrated to the United States.

“I was so touched to hear from Gerda’s granddaughter and a few weeks later from her father, Gerda’s son Jim Klein,” Ovaska said. “He said, ‘Your beautiful gesture reached my mom just in time.’”
Klein and Ovaska plan to continue to keep in touch so she can continue to share the family story with future students.

Jim spoke about his parents during a recent telephone interview with the Los Alamos Daily Post.

“My parents were remarkable people,” he said. “They were wonderful parents. My mom emerged from an experience of terrible pain. She and my father’s dearest wish was to create a normal life for their children and themselves.”

Jim can’t remember a time when he didn’t know his mother’s story of survival. His father also lost his parents in the Holocaust. They sent him to safety in the U.S. He didn’t yet know about their death when he met Gerda as an American G.I.

Gerda and Kurt published a book of their love letters, written when they were waiting for Gerda to be allowed to enter the United States.

“Their whole lives were a love story,” Jim said. “My mom always said that pain should not be wasted … she has shared her painful story in a most inspirational way.”

Gerda gave her first speech about her experiences during the Holocaust within weeks of her arrival in the U.S. in December 1946, Jim said, adding that her English was minimal, but she was determined to do it.

“She never stopped speaking after that,” Jim said. “She traveled the country telling her story until she was 90. After that she continued to speak at home in Phoenix. Mom could relate to princes and paupers. She found common ground with everyone.”

Jim explained that his mother’s favorite audiences were classrooms of students.

“She always said teaching is the noblest profession,” he said. “She looked at students as messengers to a time she wouldn’t see. My mother was 97 when she died … there was sadness, but there was also gratitude for having her with us so long. I’m glad she was able to enjoy Lynn’s flowers.”

This summer, Jim and his family will travel to Waldorf, Germany. His father’s hometown will honor Kurt Stein with a three-day festival.

After Lexi’s voicemail last April, Ovaska immediately shared the story with her family of how moved the Klein family was by her simple act of kindness.

“When my daughter Elise and I took those few minutes to drop off the flowers to the front desk, we had no idea the impact it would make on everyone.”

“That night I had to call my teacher Mrs. Heyerdahl – she is retired in Minnesota, and I have only spoken with her a few times in 30 years,” Ovaska said. “She met Gerda years earlier … she asked me to please tell Gerda’s family the impact she made in Minnesota. We agreed that we’re all just ‘standing on the shoulders of giants.’”

“The next day I shared the voicemail from Lexi with my Euro students and they were astonished that we were connected to Gerda right as she passed away,” she said. “All my classes asked to watch the documentary and many students shed tears. Afterwards, my students wanted to write letters to the family expressing their admiration for Gerda. These letters are one of the most special things I have collected from my students in my 25 years of teaching.”

“This is really a validation for what happens in the classroom,” she said. “We must preserve those errors in history and bring good out of it. You can’t combat misinformation if you don’t have facts, even the difficult ones. History isn’t memorizing dates in a textbook; it is a family conversation sitting around the table sharing the good and bad so we can learn from it. It’s an essential part of humanity to understand our past.”

Weissmann Klein was a Polish-born American writer and human rights activist. Her autobiography was adapted for the 1995 short film, “One Survivor Remembers”, which received an Academy Award, Emmy, and was selected for the National Film Registry.

In 2008, at age 84, Weissmann Klein founded Citizenship Counts, a nonprofit that teaches young students in communities across the country about civic rights and responsibilities by having them actively participate in a naturalization ceremony.

In 2011, she received the Presidential Medal of Freedom from President Barack Obama.

Weissmann Klein’s short speech at the Oscars is regarded by many as one of the most memorable ever given at the Academy Awards:

“I have been in a place for six incredible years where winning meant a crust of bread and to live another day. Since the blessed day of my liberation, I have asked the question, ‘Why am I here?’

“I am no better. In my mind’s eye I see those years and days and those who never lived to see the magic of a boring evening at home.

“On their behalf I wish to thank you for honoring their memory, and you cannot do it in any better way than when you return to your homes tonight to realize that each of you who know the joy of freedom are Winners.”

Ovaska invites everyone to watch Weissmann Klein’s acceptance speech and her documentary and talk about it as a family. Then she asks that you go out and do your own simple act of kindness. “You never know the difference it might make!”