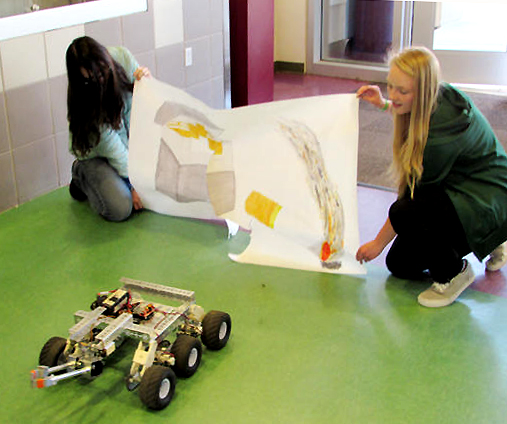 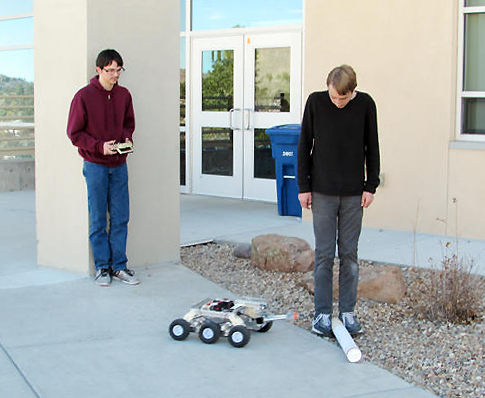 Los Alamos High School students Aaron Laurtizen, left, and John Caparone manuever their robot to take down a model of a cigarette. Photo by Kirsten Laskey/ladailypost.com

While students mingled in the commons area of the school between class periods, sophomore Aaron Lauritzen and freshman John Caparone maneuvered a robot created by their high school robotics class to destroy a giant poster of a cigarette pack and a model of a cigarette created by sophomore Emily Jones.

The event was part of the nation-wide program, Kick Butts Day, which was sponsored by the Campaign for Tobacco-Free Kids. On Kick Butts Day, teens encourage their peers to be tobacco-free, reject tobacco companies’ devious marketing and urge elected officials to help make the next generation tobacco-free.

In addition to the demolition, members of the Evolvement program manned a table to distribute informational materials on the  health hazards of tobacco and e-cigarettes. Additionally, a survey was handed out regarding tobacco and e-cigarettes and students were encouraged to fill up a giant poster with their dreams and aspirations for life.

Junior Caleb Hatler explained the information collected from the survey will be used to come up with an action plan to get people better informed of the school’s tobacco policy and to help keep the school tobacco free. The poster is planned to be displayed at the high school.

Coordinator Bernadette Lauritzen explained it is important for teens to spread the message to their peers that smoking is a health hazard. “I really think it is more effective when the student becomes the teacher. The message goes further,” she said. Lauritzen added it is the fourth year the high school has participated in Kick Butts Day. “I just think it’s a fun way to involve other programs and to let the students shine,” she said. She explained art teacher Mary Grace recruited  Jones to create the cigarette art and robotics teacher Don Davis offered up his class’ robot to the cause.

While there is a lot of information about the health risks of smoking, Lauritzen said, “I think for kids today the real problem is e-cigarettes and I think the lack of knowledge of the harm they cause is a problem.” She added while tobacco use is declining the use of e-cigarette is “astronomical.”

Students were eager to lend a hand to the cause. “I think I just like the idea of a smoke-free campus,” Hatler said. “Having no one smoking makes a safer, heather environment.”

This year, Kick Butts Day focused attention on how tobacco companies entice kids with a growing market of sweet-flavored products such as electronic cigarettes and cigars, threatening to addict a new generation. These products have proved popular with kids. 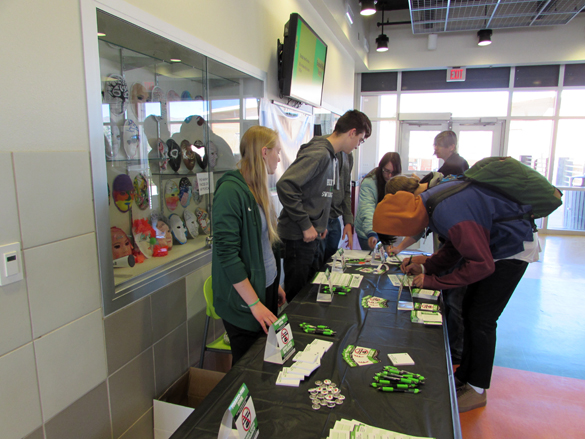 Students fill out surveys regarding tobacco use during the Kick Butts event Wednesday. Photo by Kirsten Laskey/ladailypost.com 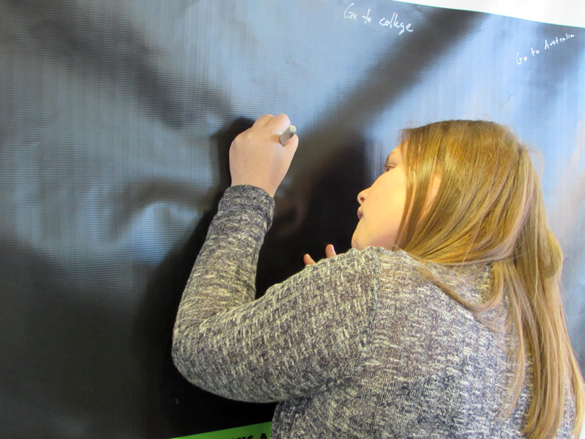 Los Alamos High School student Kyla Roberts writes a dream she has for her life on a poster during the Kick Butts event Wednesday. Photo by Kirsten Laskey/ladailypost.com