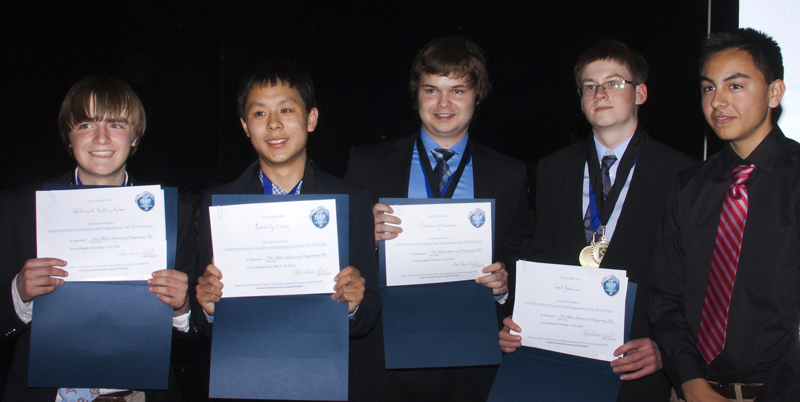 Two Los Alamos High School science and engineering fair exhibits were chosen from among the best of the best at the 62nd annual New Mexico State Science and Engineering Fair last weekend at New Mexico Tech in Socorro.

Also earning a coveted ISEF spot is a team of three LAHS Sophomores, Jovan Zhang,  William Sidley-Parker and rounding out the team is German foreign exchange student Sven Jandura. The team placed first in the Computer Science category and won Grand Award in the Physical Science Senior Division. The winning Computer Science project is entitled, Are you Smarter Than a Sentry Gun? An Investigation of Motion Tracking. The State Science and Engineering Fair awarded six Grand Awards and International spots from a pool of 148 competitors, 9-12th grade.

The Zhang/Sidley-Parker/Jandura team will join Kendrick in Los Angeles May 10-16th, for an all-expense paid trip for themselves and their parent sponsors. Also joining the state delegation at the International Fair is the Northeastern New Mexico Regional Fair  Grand Award winning  team of LAHS Sophomores Esteban Abeyta and Ashvini Vaidya. The Abeyta/Vaidya team qualified on March 8th at the Regional Fair in Las Vegas, NM for the all-expense paid trip to ISEF.  Junior Devon Conradson is an alternate to the Northeastern Region for the ISEF Fair, should one of the two regional winners unable to attend the May fair.

This will be the first time that LAHS has six students attending this prestigious fair and the 10th straight year for LAHS to have competitors at the international level. The LAHS students will be accompanied by their parent sponsors and Dawn Brown the Los Alamos County/LAPS Science and Engineering Fair coordinator.

The Intel® International Science and Engineering Fair® (Intel ISEF), the world’s largest international pre-college science competition, annually provides a forum for more than 1,600 high school students from more than 70 countries, regions, and territories to showcase their independent research and compete for more than $4 million in awards.

Today, millions of high school students worldwide compete each year in local and school-sponsored science fairs; the winners of these events go on to participate in Intel ISEF-affiliated regional and state fairs from which the best win the opportunity to attend Intel ISEF. Intel ISEF unites these top young scientific minds, showcasing their talent on an international stage, enabling them to submit their work to judging by doctoral level scientists. The Intel ISEF is the premier global science competition for students in grades 9–12.