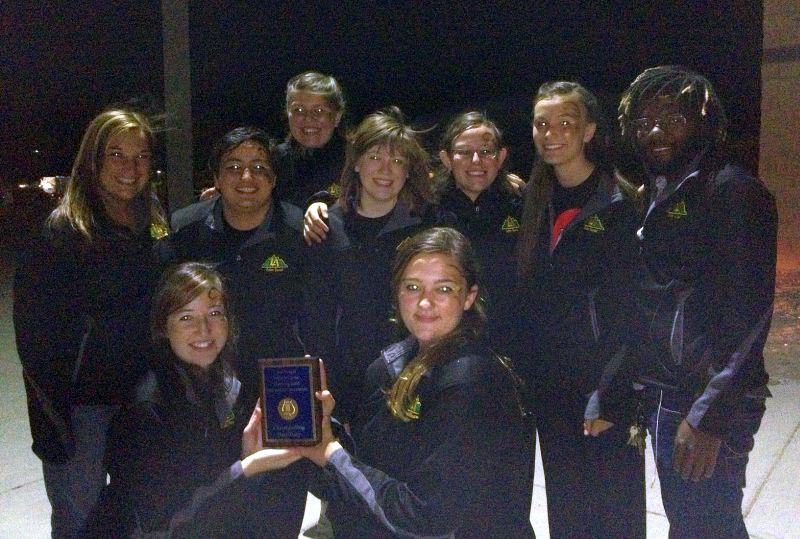 Los Alamos High School Marching Band Color Guard earned the Outstanding Auxiliary Award Saturday at the Second Annual Valencia Classic in Los Lunas. Band director Zane Meek said Monday that the award is a testament to the “number of hours the color guard members put in on their own, and the determination they have to be great.”

The color guard is coached this year by Edwin Parker and Kim Kissane. Parker is a member of the UNM color guard and has taught color guards in the Albuquerque/Rio Rancho area for many years.

Kissane has also coached for many years, including nine years at Cibola High School.

Meek congratulated the Topper Band on a very good performance and praised the progress that has been made by the band during the last few weeks.

“I am extremely proud of what we accomplished,” Meek said.

The Valencia Classic is an independent festival where bands receive positive adjudication and constructive suggestions designed to help further development of their programs.

Bands are rated superior, excellent, and good in the areas of music performance, visual performance, and overall effect. The LAHS band received one superior and two excellent ratings.

Meek said this week the band is preparing for the Zia 35th Annual Marching Band Fiesta Saturday at University Stadium in which some 32 bands will participate.

In addition to regular class-time practice, the band has two-hour evening rehearsals Tuesday and Thursday at Sullivan Field and will play for half-time at Friday night’s football game.

This year, Los Alamos Middle School band members and students interested in color guard will join the Toppers at the Zia competition, according to Band Booster Karen Mehlin.

“Thanks to our fundraisers, the Boosters were able to support the majority of the bus costs, while the LAMS students are paying for their lunches, entry fees, and some of the bus cost,” Mehlin said. “We hope to make this a yearly tradition so that the eighth grade families will have a better idea of what the marching band is really all about.”